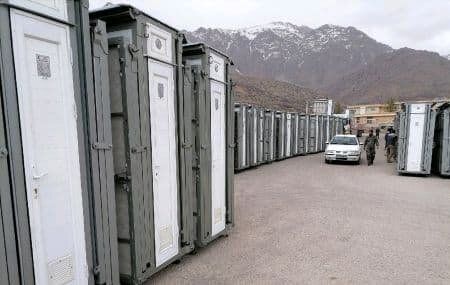 According to reports Economy News According to ISNA, following the Supreme Leader’s order to the IRGC Commander-in-Chief to revolt and meet with the earthquake-stricken people of Sisakht region and promise to send 300 shelters to donate to the earthquake victims, 2nd Brigadier General Hamid Khoramdel He said: “Thank God, 300 shelters donated by the Supreme Leader of the Islamic Revolution reached Sisakht this evening, and the work of installing and donating them to the earthquake-stricken people will begin tomorrow.”

Sardar Khorramdel announced the Rial value of each building as 100 million Tomans and added: The design and production of these buildings were done by IRGC engineers inside the country.

He pointed out: The unique design of these sheds has made the work very easy to transport and install and can be installed in 20 minutes.

The commander of the Fatah Corps in Kohgiluyeh and Boyer-Ahmad Provinces also announced the cash gifts of the IRGC Commander-in-Chief to thousands of people during Nowruz and said: Special livelihood aid for the holy month of Ramadan will also be distributed among the earthquake victims in Dena city.