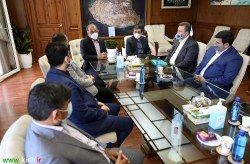 On the first day of the new year and the meeting of the head of the Kish Free Zone Organization with the public relations management of the organization and its colleagues, Jafar Ahangaran stressed the importance of cohesion and empathy between the executive organs of the region and said: to maintain welfare, comfort and peace of mind And the investors of Kish Island, the development and upgrading of the infrastructure of this region is on the agenda of the Kish Free Zone Organization.

Jafar Ahangaran, referring to the admirable thinking of the Kish special police force regarding the implementation of social regulations while maintaining the vitality of the community, said: “The health and good atmosphere of the Kish urban community owes to constructive interaction between all executive bodies in this region.”

Ahangaran stated that the Kish Free Zone Organization has established an effective relationship with the most deprived sections of society in the direction of social responsibility and preventive measures against the outbreak of coronary heart disease. Maintain brand health standards in this area.

He considered the economic prosperity and attraction of tourists in all seasons of the year in Kish Island important and said: paying attention to social and economic components and indicators for the development of Kish Island is one of the strategic programs of the Kish Free Zone Organization.

The head of the Kish Free Zone Organization continued his speech by stating that the adjustment of prices in Kish Island is a concern for the livelihood of the residents of this region and stated: in order to achieve the goals and policies of the organization; The start of the fruit and vegetable market and the development of this valuable project is one of the effective and efficient measures in this field.

Ahangaran called manpower valuable assets of Kish Free Zone Organization and said: “Human resources of this group in any organizational position can play a role by presenting creative ideas and proposals for the development of Kish Free Zone.”

He emphasized: The role of public relations management of Kish Free Zone Organization in informing the public about valuable economic, cultural, tourism measures, including development plan and providing investment information at the national and transnational level is of great importance.

Ahangaran pointed out that in the past years and during the tenure of the Public Relations Officer of the Supreme Council of Free Zones, several research activities have been carried out, the results of which are available in the book of the Law on Free Zones Regulations. Labor, investment regulations, export and import as well as company registration; It was compiled and implemented within two years.

He pointed out: with the prudent management of the Secretariat of the Supreme Council of Free Zones; The formulation and implementation of labor exemptions was one of the valuable measures in the free zones of the country.

The head of the Kish Free Zone Organization stated that in 1973, a proposal for a comprehensive study of Iran’s free zones was submitted by the Secretariat of the Supreme Council of Free Zones to the Center for Housing Research and Studies under the Ministry of Housing; He stated: This plan was published in sixteen volumes over a period of two years. In this study plan, the whole of Iran was located and feasibility study was defined based on criteria and capacities. It introduced suitable areas for creating a free zone in the country. .