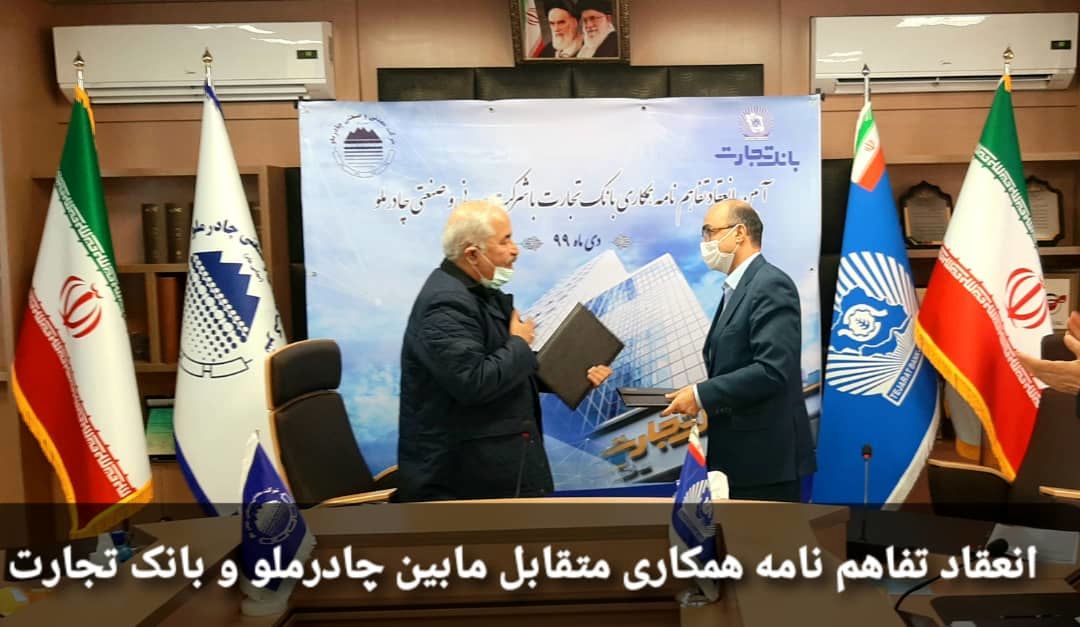 A memorandum of understanding was signed between Chadormelo and Tejarat Bank

According to the economic observation and quoting public relations, this morning in a ceremony attended by the CEOs of Chadormelo Mining and Industrial Company and Tejarat Bank, a memorandum of bilateral cooperation was signed.

According to this memorandum, from now on, Tejarat Bank undertakes to provide all kinds of financial and banking services to this company in return for the concentration of monetary and banking activities, including foreign exchange and Rial of Chadormelo Company and its subsidiaries.

This memorandum is concluded with a validity of 2 years and can be extended for later years if the parties agree.

Among the items agreed upon by the parties, opening various types of foreign currency and Rial accounts, determining the credit limit and opening various types of domestic and foreign documentary credits, issuing and determining the validity of various foreign currency and Rial guarantees, granting various facilities in the form of Islamic contracts, company financing By concluding separate contracts, performing all matters related to shares, such as underwriting and portfolio management by Tejarat Bank brokerage, Chadormelo Mining and Industrial Company also agreed to transfer part of the accounts of the company and its subsidiaries to Tejarat Bank. Take action.

According to the public relations of Chadormelo Mining and Industrial Company, in the signing ceremony of this memorandum, Engineer Nasser Taghizadeh, CEO and member of the board of directors of Chadormelo Company, thanked Tejarat Bank for its cooperation with Chadormelo Company and expressed his hope: By concluding this Memorandum, increase the level of bilateral cooperation. Referring to the country’s economic situation and the problems caused by the oppressive sanctions, he added: “I believe that the country’s economic development is well possible by relying on the financial capabilities and investments of large mining and industrial companies, and with these measures we can Let’s take the burden off the government because in these circumstances, the government alone can not be expected to take steps towards economic development.

He added that Chadormelo is fully prepared to go through the development and employment path by implementing its development plans and using banking facilities, and fortunately, it also has the support of the Minister of Silence and provincial officials.

According to the same report, Dr. Dolatabadi, CEO of Tejarat Bank, thanked Chadormelo for his kind opinion in developing financial relations with Tejarat Bank and appreciated the developmental views of Engineer Nasser Taghizadeh, who, wherever they have taken responsibility, is the source of valuable services. He added: “As the bank has previously contributed to the huge project of desalination and transfer of water from the Persian Gulf to the central regions of Iran, we hope to play an effective role in financing the ongoing projects of Chadormelo and We also have subsets of it.

At the end of the ceremony, a memorandum of cooperation was signed and exchanged between the two sides.