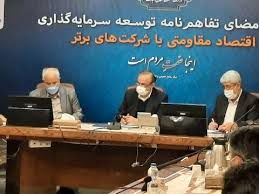 This cooperation is in line with the implementation of the “Resistance Economy with Top Companies” project initiated by the Ministry of Mines and Trade worth $ 6.1 billion.

Engineer Nasser Taghizadeh, CEO and member of the Board of Directors of Chadormelo, in the ceremony, which was attended by governors and members of the Islamic Consultative Assembly, referring to the company’s future development plans, announced that he is ready to invest in downstream units and complementary industries. We are worth 74 thousand billion tomans. Minister Samat also considered this measure very important and effective for the economic development of the country in creating employment and economic prosperity.

It is worth mentioning that a memorandum of cooperation was signed between the Ministry of Silence and several companies from among the top manufacturing companies, including Chadormelo mining and industrial companies, Al-Mahdi Aluminum, Sepahan Oil and Arak Machine Building and Shirin Asal food industries.

These memoranda of understanding include 62 projects in the field of mining and mineral industries, food industry, machine building and refining industries, and the purpose of arranging and signing them is to create investment security and encourage firms to develop and achieve the goals of a resilient economy based on capability. Internal.