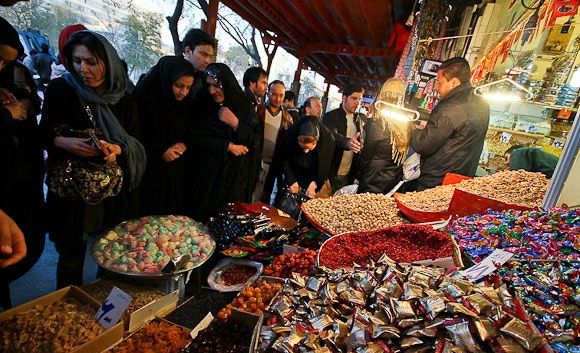 According to reports EconomyOnline According to Hamshahri, they are standing shoulder to shoulder in the shopping queue; People who were on the road for hours to get around Tajrish Square through the crowded streets and complete their Eid dinner table. Around the square, below the pedestrian bridge towards Imamzadeh Saleh (AS), there is a commotion. Everyone puts their voice in their throat and shouts. One auctioned his greens, the other put the semolina in a bowl and arranged it around the tray. The fruits are colored, handkerchiefed and shiny, waiting to be placed in bags and taken home. Customers’ faces are masked, but a number of vendors, apart from the corona, are selling. Their masks either sit on their chins or close their mouths. Some ignored the outbreak, folded the masks and put them in their pockets: “Where was Corona, madam?” This is the answer of one of the sellers.

People regardless Corona outbreak, In the second year since the start of the new year, with the outbreak of the disease, they have blocked the sidewalks in an attempt to make their tables more colorful. Towards the bus terminal, the crowd is not twisted and walking. The bags are filled with greens, semno, garlic and greens and tied between the customer’s hands. “The market is sluggish”; “I started the auction,” says the Semno salesman, raising his voice. “All the people you see are often not customers, they come and go,” he says. “No one buys so much that the market shakes.” Tajrish Bazaar is in the hands of vendors, one group has set up the Haftsin tableware and another group is selling clothes, towels and shawls above Tajrish Square to Quds Square.

All the peddlers were hoping for this Eid night and now they are disappointed. Last year, at this time, they were packing their bags, and the market was ordered to close to prevent the spread of the corona: “Believe me, the situation in March last year was better than this year.” Ali sells candles and sets them up in front of fruit sellers. He raises his voice to attract more customers: “The lady is expensive; Expensive.” Prices are several times higher than last year. The first market is green 40 thousand tomans, the middle of the market is 35 thousand tomans and the last ones sell the same green for 25 thousand tomans. Vendors set their own tariffs. Towards the top of the square, however, more people walked on the sidewalk. Morteza is one of the sellers of the shop under the pedestrian bridge. They sell casual clothes. He says that these peddlers have upset them. Vendors are open from 6 pm. Morteza and his colleagues also complain about the sluggishness of the market and say that the market situation has never been bad this year. Even last year, things were better and people were buying more: “This is not called Eid night market; “Even though the nights are very crowded, the buyer is small, people are fleeing the prices they see.” No one has warned them about closing the shop during this time.

In this situation, the corona is the only forgotten element of the market: “It was rumored that the market will be closed on March 11, but it did not happen. Then they said that the twenty-fifth would be closed. It did not close again. “If they wanted to close, they should have done so by now.” Morteza is worried about the greater prevalence of Crohn’s. The crowd is large, a number of vendors have forgotten the masks, and bags, cash and goods are being exchanged.

Mohsen sprays water on his greens. “Under the pedestrian bridge, he spreads his blanket:” Women, the people themselves grow greenery. “They don’t buy from us anymore.” The shop above the square is a shoe store, inside the shop but it is empty.

A group of guitarists are sitting on the floor and playing around. The shawls sellers also stand, sell, Nemat stands a little farther away and sells his crackers and cigarettes: “Madam, the market is a disaster. I have not sold anything. “My condition is bad, my rent has been delayed for a year.” Nemat is a seasonal seller. Each season has a new set. Bilal used to sell it, but it has not been sold since the curfew was implemented after 9pm.

Even now, he has no crackers, cigarettes or rockets for Wednesday night in Syria. He raises his mask from under his chin and has been selling in the area for 30 years: “People are weaker this year than last year. “What should people do with this high cost?” This is an old woman asking a shopkeeper who sells spring orange vases more expensively than the whole market.

The salesman replies, “Go and ask the one who made it more expensive.” Shopping bags are light. A woman enters a clothing store. He asks the price of a cotton skirt and hears the answer: “390 thousand tomans.” His eyes widen in protest and he goes out. The area around Tajrish metro is busier; Vendors have gathered there.

That area is closed to the sellers of Syrian Wednesday items: “Each grenade costs 15,000 Tomans, a pack of 60 cigarettes costs 20,000 Tomans.” Men and women move the crackers up and down. Ahead is a fishmonger; White fish is 165 thousand tomans per kilogram.

Fruit sellers also stand hand in hand: “People buy fruit after the year of delivery. “It does not work for them now.” Abbas, a fruit seller near the Tajrish metro station, points to the market with his hand and shakes his head sadly: “Everything is expensive, people can not afford it. “The market may be a little busier than last year, but it still does not work.” Abbas says no one has warned them about following health protocols.