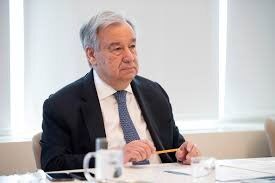 “2020 has been a year of trials, tragedies and tears,” Antonio Guterres said in a New Year’s speech released by the United Nations on Monday, according to Sputnik. Poverty, inequality and hunger are rising, jobs are disappearing and debts are rising. Children are fighting. Domestic violence is on the rise and insecurity is rampant.

He stressed that countries must work together in unity and solidarity so that the rays of hope can reach all over the world.

“The main goal of the United Nations in 2021 is to build a global coalition to neutralize carbon – net zero emissions – by 2050,” Guttierez said. The UN Secretary-General stressed that every individual, government, city and business can play a role in creating a better future.

“Let’s make peace with each other and with nature, deal with the climate crisis, stop the outbreak of Covid 19 and do something so that 2021 is a year of recovery,” Guttierez said.

The World Health Organization (WHO) Secretary-General Tadros Adhanum said on Sunday that the world must be prepared for future epidemics that are inevitable. He added that before the corona epidemic began, there were many views and reports that the world was not ready for such a crisis.

The Secretary-General of the World Health Organization stressed that all countries should invest in preparedness capacities. Real preparedness is not just the responsibility of the health sector, but requires the approach of the whole government and the whole society.

According to Johns Hopkins University, there are more than 81 million cases of coronary heart disease worldwide, while the global mortality rate is more than 1.7 million.