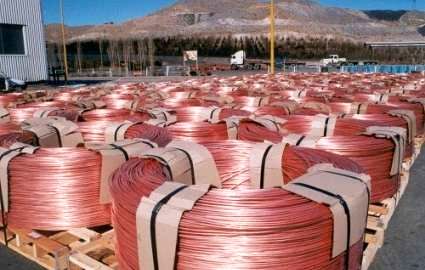 Price increase created in Cathode Market It accelerated in the last two months of the year, with China’s demand boosting and the weakening US dollar stimulating commodity markets, including cathodes.

Under these circumstances, Joe Biden’s victory in the US presidential election also led to optimism in world markets about the stability of the situation, which led to a rise in commodity prices.

In addition to the stated cases, the deficit Copper supply Global markets due to the conflict between major copper-producing countries such as Chile and Peru with Corona, has had a significant impact on increasing global copper prices.

According to the Metal Bulletin, the TC index or Treatment Charge is the coefficient that copper miners pay to convert concentrate to cathodes, ie its processing and purification costs are taken into account. The rate reached $ 44 per tonne in Asia on December 18.

Of course, part of this reduction in conversion costs in recent years is due to technological improvements, but the decline in this index in recent months is due to lack of concentrate supply to the market by miners, which has caused copper smelting and refining units to become more discounted costs. . However, the increase in this index during the last days of 2020 indicates an improvement in the supply of concentrate to the market.

Rising demand for cathodes while the stock level of this product has been reduced to a minimum, has stimulated global markets and increased the price of this product.

Estimates by international organizations indicate that the demand for commodities, especially cathodes, will continue to increase in 2021.

Meanwhile, given that Joe Biden in his election slogans had made the move to green energy one of his work priorities, and since a metal such as copper, which has a special place in green energy, this metal will face more optimism from investors. شد.

The rapid price growth of cathodes in world markets was such that the trading price of this product in the London Metal Exchange market entered the channel of $ 7,000 per ton in mid-November, and in mid-December it approached the price ceiling of $ 8,000 per cathode in It traded at $ 7,984 on December 18.

However, in the following days, the price of this product entered a downward trend and the trading price of Cathodes on December 24 reached $ 7,793 per ton. Thus, Cathodes experienced a 26% growth in the London Metal Exchange during 2020.

Many of the products offered in the commodity exchange ring in the fall of this year faced a drop in demand from buyers, so that the recession in this market was a signal of the market sinking into a state of stagflation. The cathodic trading ring was not spared from the conditions of the autumn recession, so that the amount of registered demand for cathodems from buyers increased from 82,000 tons in the summer to 41,000 tons in the autumn. Finally, 29,000 tons of cathodes were traded in the physical market of Bursa Kala in the first three months of autumn.

In fact, the complementary copper industries expected that the supply price of this product from the trading ring of the stock exchange would decrease with the stable exchange rate in the country and the adjustment of inflation expectations, but the increase in the global cathode price did not allow the cathode price to adjust in the domestic market. In the trading ring of Boursecala, it continued its increasing trend, so that the base price of this product in this market reached one thousand tomans per kilogram on December 20, 2018; Thus, the base price of cathodes in the country has increased by 200% from the beginning of the year to the end of December.

Meanwhile, the price of cathodem trading on the London Metal Exchange increased by 26% during 2020. Thus, the devaluation of the national currency or the half-price increase of the exchange rate should be interpreted as the most important reason for the staggering price growth in this market.

Contrary to the continuous upward trend in the price of cathodes, the base price of this product in the first week of winter, ie on Sunday (January 7), was slightly lower than the base price of the previous week and reached 199 thousand tomans per kilogram. This drop in the base price could not increase the volume of applicants in this market, so that for 4,000 tons of products offered, a demand equal to 2,060 tons was registered by buyers, and finally only 60 tons of products in this market were traded at the base rate. Took.