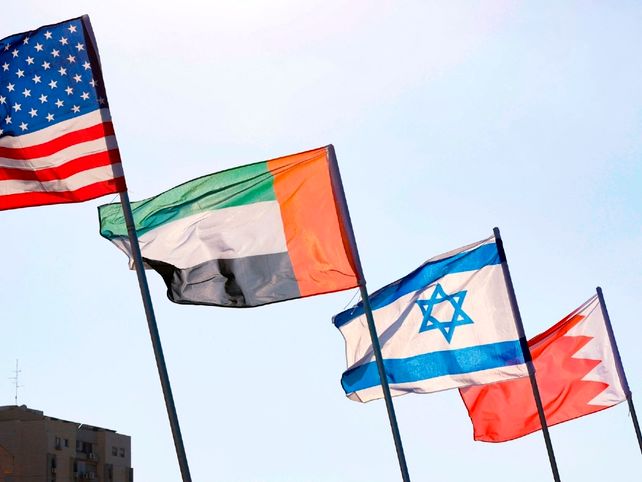 According to reports EconomyNews ; Paul Pilar (Paul R. PillarFormer US intelligence official and senior fellow at Georgetown University Security Research Center in an article for National Interest entitled “Is Israel slowly building a military alliance in the Persian Gulf?” Wrote: The promotion of relationships that exists is merely the promotion of relationships, nothing more. To do so, the “peace agreement” is an irrelevant title.

Improving relations is not a peace agreement

“According to the Israeli television channel i24News, Tel Aviv is expanding its diplomatic presence in the Persian Gulf by advancing the “Defense Alliance” plan, which includes Israel, Bahrain, the United Arab Emirates and Saudi Arabia. The Arab members of the alliance appear to be cautious about deep ties with Israel, but this move puts the recent development of relations between Israel and several Arab countries in perspective.

Slight developments like this Upgrade relationships – which is labeled “Abraham’s agreements!” It is also attached to it – it has been so internationally welcomed. It is as if the harmony between the followers of the monotheistic religions of the world has occurred suddenly.

Certainly, in general, for all countries in the region, having full relations with each other is better than not having these relations; At least to make sure nations talk to each other. But The main factor in promoting Israeli-Arab relations is not the beginning of the path of goodwill and peace, but Israel’s strong desire to show that the continuation of the chronic conflict with the Palestinians and the continued de facto annexation of the Palestinian territories will not condemn and condemn Israel.

Israel’s demands are remarkably influential and have a direct bearing on how to deal with any issue in US political discourse. On the subject in question, this connection was particularly evident during the Trump era. According to Trump, such actions not only attracted the attention of influential Israeli supporters in the constituencies, but he also referred to this improvement in Israeli-Arab relations as his diplomatic achievement, even in a government with a famine of foreign policy success. Has been encountered.

Trump’s bribes to the Arabs to compromise with Israel

It should be noted that the Trump administration, in order to establish full diplomatic relations with Israel, was forced to bribe Arab governments by giving bribes; The bribes were for the UAE selling F-35 stealth fighter jets and other advanced military equipment, for Sudan to be removed from the terrorism list, and for Morocco to provide additional weapons and abandon the long-standing US neutral position in the Western Sahara conflict. These bribes show that the main factor in this promotion of relations was not the emerging peaceful goals of the parties involved.

This is exactly what promotes existing relationships, and nothing more. None of the mentioned Arab countries was involved in the war with Israel. They have already cooperated significantly with Israel, even without formal diplomatic relations, including in the field of security. The fact that Saudi Arabia is said to be without full diplomatic relations on “Defense Alliance“Negotiating with Israel shows that such relations can hardly be the cause of peace or war in relations with Israel. Using the title “Peace Agreements” for such new versions is a misnomer.

The goals of the Hebrew-Arabic axis are not peaceful

If this upgrading of relations has some consequences, it is certainly not in the direction of peace. US bribes have taken everything away from peace. For example, the shift in policy toward the Western Sahara conflict has exacerbated tensions between Morocco and Algeria and complicated international efforts to resolve the issue.

The prospect of any peace between Israel and the Palestinians is only farther away. The idea of ​​an “external-internal” solution, which involves Arab governments pressuring the Palestinians, has failed in the face of the fact that the Palestinians, as a dominated party, have almost nothing to cede. Israel’s side has weapons, power, land and the ability to transform. Improving Hebrew-Arab relations will only reduce the tendency to accept the process of change by reducing the diplomatic costs of continuing the Israeli occupation.

“And in the Persian Gulf, creating military alliances, or as Israeli Defense Minister Bani Gantz called it.”Special security arrangements“He says he is sharpening the lines of conflict, drawing the Arabs of the Persian Gulf into line with Israel’s enduring enmity with Iran, which sometimes takes the form of a threat of military action; Gantz last week in a show of force, publicly on the list of Iranian targets He said that Israel was ready to attack them. On a smaller scale, this situation reproduces the enmity and turmoil system of the alliances in Europe that led to World War I.

The general principle that applies to all countries in a region is full relations with other countries in the region that include all countries. In the Persian Gulf region, this goal is promoted through an association with inclusive participation; The model is modeled in part on the Organization for Security and Cooperation in Europe, and is designed to reduce tensions and increase peaceful co-operation throughout the Persian Gulf region. “This is an development that can be worth a lot of titles and be presented as an achievement.”

Prof. Paul R. Pilar (Paul R. Pillar) He is the editor-in-chief of National Interest, and a senior fellow at Georgetown University’s Center for Security Research and the Geneva Center for Security Policy. He retired from the Central Intelligence Agency (DCI) in 2005 after 28 years in the US intelligence community, and has since served as a visiting professor on a security studies program at Georgetown University.

Mr. Pilar has held senior government positions, including National Intelligence Officer for the Middle East and South Asia, Head of CIA Analytical Units in the Middle East, Persian Gulf, and South Asia, Deputy Director of the DCI Counterterrorism Center, and Executive Assistant Director of Central Intelligence. Professor Pilar also served on the National Intelligence Council as a key member of its think tank. He is also a Vietnam War veteran and retired U.S. Army officer.

Paul Pilar holds an honorary degree from Dartmouth College, a bachelor’s degree in philosophy from Oxford University, and a master’s and professional doctorate from Princeton University.

Paul Pilar’s books include the following:
1. Negotiating for Peace: Ending the War as a Bargaining Process (1983)
۲. US Terrorism and Foreign Policy (2001)
3. US Foreign Intelligence and Policy: Iraq, 9/11 and Correcting Mistakes (2011)
4. Why America Misunderstands the World: National Experience and the Roots of Misunderstanding (2016).