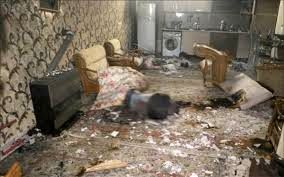 The social deputy of the Fars province police command announced the arrest of a murderer for the murder of his 40-year-old brother and his burial in a reception hall in Pasargad.

Kavous Mohammadi stated about the details of this case: Following the announcement of the 110 Police Emergency Center about a murder case in the town of “Khalilieh” in Pasargad city, the issue was placed on the agenda of the officers.

Fars Social Police Deputy, added: Pasargad police officers, after investigating the murder scene and interrogating the relatives of the deceased, were informed that the 32-year-old killer killed his 40-year-old brother with a hard object after a fight at home and buried him in the reception hall of the house. has done.

Mohammadi stated that the agents succeeded in arresting the killer with special police tricks in the very first moments, adding that during the initial interrogation, the accused expressed his remorse and remorse, citing family disputes.

The police official lamented the occurrence of such an incident, noting that families should resolve their family problems before resorting to violence through mediation or referral to a counseling center and specialists so that we do not witness any tragic incidents in the community. .