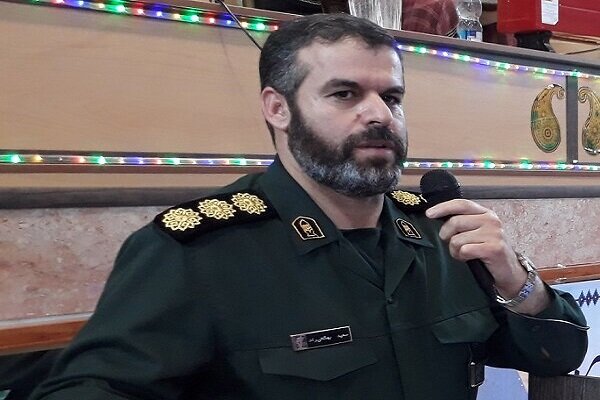 According to the Mehr reporter, Saeed Beheshti this afternoon in a press conference congratulating the birth of Hazrat Zeinab (s) And Nurse’s Day stated: with the information of the Ministry of Health on March 22, 2017, the Islamic Revolutionary Guard Corps stepped into the field to help and prevent the spread of corona.

He added: “Initially, he took action by disinfecting public roads and helping the IRGC’s medical staff, and according to the Ministry of Health and Kermanshah University of Medical Sciences, it ranked first in the country in disease control and third in screening.”

The commander of the Kermanshah IRGC Resistance Area stated: With the outbreak of the corona, the economy and livelihood of families were hit, but the vulnerable groups are much more under pressure.

Beheshti continued: “Before the Supreme Leader’s order to the executive apparatus and the people for faithful assistance, the Kermanshah regional corps had distributed 10,000 livelihood packages among the needy.”

Referring to the beginning of faithful assistance, the need for a database in Kermanshah, he clarified: with the help of the Basij and the people and mosques and trustees of the neighborhoods, whose number reached 2,000, 60,000 people were identified and refined this information with support institutions such as the committee Relief and welfare In the end we reached 40,000 people.

Beheshti said: “This number is divided into two levels, the first level includes people who lived only from the subsidy or a family with a patient.” صعب Treatment The second level included people who earned less than one million tomans.

The commander of the Kermanshah IRGC Resistance Area added: So far, 36,000 livelihood packages have been distributed in 6 stages with the help of the IRGC, charities and the executive staff of Farman Imam and other institutions, of which 23,500 are worth 300,000 Tomans per package and 12,500 are It has also been 500,000 Tomans.

Beheshti, referring to the measures taken in the corona outbreak, said: production of masks, disinfectants, Shield And گان It was carried out with the cooperation of the army in Kermanshah, and 17 people were initially sent to Golestan Hospital to help the medical staff.

He said: “Today, 97 students, scholars and Basijis are serving the people and helping the medical staff by attending four hospitals.”

The Commander of the Resistance Area of ​​the Kermanshah Corps stated that the plan of Martyr Soleimani with the aim of breaking the corona chain was started in the presence of the Minister of Health in Kermanshah with the slogan of a health base in every house. ریزی Care, support and monitoring teams were formed and rapid response tests of Imam Khomeini Executive Headquarters were distributed in health centers.

He continued: “Care teams under the supervision of the University of Medical Sciences began their work and controlled the outbreak of the new wave by detecting diseases in home or non-home quarantine.”

Beheshti added: Support brigades to each patient’s home with 10 masks, disinfectants and gloves once They donated consumption and, if necessary, delivered living packages to them.

He pointed out: In this project, Kermanshah is divided into 10 regions and 10 areas of resistance are in charge of support teams and started their work with a mission order and ID card.

Beheshti continued: 63 monitoring teams referred to the busy centers and warned them to follow the health instructions, and if they did not follow the cases, they were sealed with the warning of the University of Medical Sciences.

Referring to the establishment of a health dormitory in Kermanshah, the commander of the Kermanshah IRGC Resistance District said: “Due to the increasing trend of patients at that time, Farhangian University for men and the Rahyan Noor dormitory for women with a capacity of 300 people for those who did not have hospitalization شد.

Beheshti stated: Fortunately, in Kermanshah, we are witnessing an improvement in the situation and a decrease in the number of patients, and death and میر Corona has increased from about 17 to four to five people in the province.