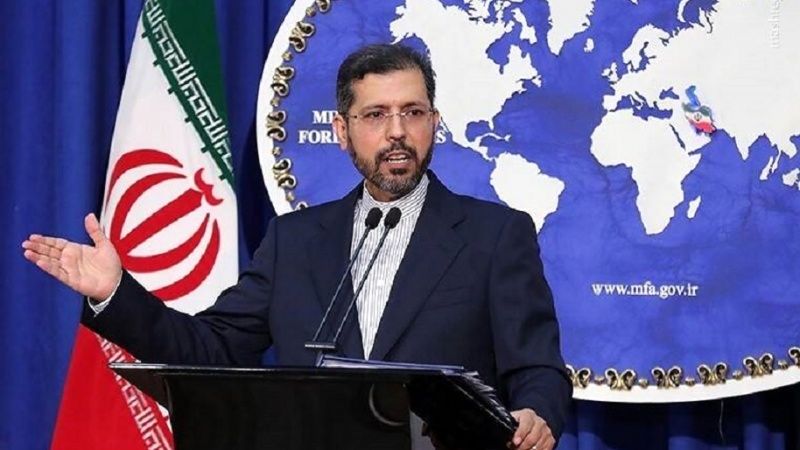 Saeed Khatibazadeh, spokesman for the Ministry of Foreign Affairs of the Islamic Republic of Iran, today (Monday) in a weekly meeting with reporters, while explaining the latest developments in the field of foreign policy, answered the questions raised.

The most important part of Saeed Khatibzadeh’s remarks is as follows:

Barjam will not be renegotiated

* The Deputy Prime Minister of the Republic of Azerbaijan will travel to Tehran on Wednesday.

* Borjam will not be renegotiated and Borjami parties will return to fulfilling their obligations.

* Iran does not negotiate with anyone about national security and national interests, and speculations are not true.

Today and tomorrow, the technical report will be published before the catastrophe is one year old and will be sent to the Ukrainian side and other related parties.

* Intervention statements have been unacceptable from day one by Canadian officials.

* I warn the Government and Foreign Minister of Canada to be held accountable.

* Issuing one-sided, repetitive and spun speeches is not acceptable and has no value.

* The attack on diplomatic and residential premises is not acceptable, but the type of attack and its timing and the statement issued by the US Secretary of State show that the timing is very suspicious and they have already prepared a statement to publish.

The spokesman of the diplomatic corps said in a weekly press conference with Abyan that the Deputy Prime Minister of the Republic of Azerbaijan will visit Tehran on Wednesday: The meeting of the foreign ministers of Iran and the P5 + 1 will be held at 11:30 Tehran time.

The senior Iranian diplomat said about Iran’s missile dialogue with Europe: “There have always been different margins on the statements that some officials say.” What the State Department has consistently and continuously announced is that Burjam is an issue that has its own process and has been negotiated, signed, finalized, and finalized, and neither we nor anyone else can reach this stage. Open. Borjam is not something that Iran negotiates.

He pointed out: “We are firm and clear in our opinion that Borjam will not be renegotiated and that the parties of Borjam will return to fulfilling their obligations and other sub-issues will be heard.” In maximum resistance, Iran showed the world that it does not negotiate with anyone about national security and national interests, and that it negotiates itself, and that speculations are not true. Iran has its own defense priorities and will act accordingly.

He also said about the visit of Zanganeh, the Minister of Oil, to Russia and the export of four and a half million barrels of oil to Syria: “We have not heard this.” Of course, such trips are common, and the Ministry of Oil will announce the details of this trip. Iran’s share of the oil market is clear, and Iran is trying to secure that share and regain what it lost.

The Foreign Ministry spokesman stated that the relations between Iran and the IAEA are technical and should be maintained within the framework of these relations. Our advice to the agency has always been to stay away from political pressures.

“We do not believe that human error caused the crash of the Ukrainian plane, and if we are not satisfied with the process of investigation and punishment of the perpetrators of the crash, we will file a complaint to the International Court of Justice,” Khatibzadeh said. The highest officials of the system, as well as those who follow normally, are saddened by this incident, and we are saddened by the children of the nation, and there is not a day or night that we are not saddened by the sorrow of this incident. We share this grief of the bereaved families, they were the great sons of this nation.

He said: ‌ At its highest level, the Ministry of Foreign Affairs has been seeking to clarify the dimensions of the matter from the very beginning, and its technical dimensions go back to the Aviation Organization, and the Armed Forces Organization is following up in this regard.

The spokesman of the Ministry of Foreign Affairs, stating that the technical report has been prepared, noted: The institutions of the Islamic Republic followed up on this issue with emphatic instructions and we did our best in accordance with international laws and treaties, and today and tomorrow the technical report The disaster will be reported and sent online to the Ukrainian side and others involved. We do our best to move forward with transparency.

Khatibzadeh stated: It is not a simple matter. The statements were intrusive and unacceptable from day one by the Canadian authorities. To date, most of the stoning and misplaced interventions have been reported, and I am saddened by the grief of these families for some Canadian politicians to provide hats for themselves and the grief of business. I warn the Government and the Foreign Minister of Canada to be accountable for their actions within a specific government, and the government that has made every effort to block the delivery of medicine to Iran and this government has no place to stand in the rostrum and talk about human rights.

He said: “I invite the Canadian Foreign Minister to diplomatic etiquette and the extent of my position.

Khatibzadeh continued: “I do not remember when the butterfly and cancer patients of European companies refused to send medicine.” I invite them to come out from behind the hypocrisy and see what responsibility they have fulfilled. Selective resolutions are not only unacceptable but also completely unacceptable.

“Our position has been clear from the beginning and we have said that solving the problem as soon as possible is in the interest of our financial system,” he said of the FATF. We hope that the diagnostic assembly will make its decision according to the interests of the system.

“The attack on diplomatic and residential facilities is not acceptable, but the nature of the attack and its timing and the statement issued by the US Secretary of State show that the timing is very suspicious and he has prepared a statement in advance,” a State Department spokesman said. Were to publish.

Speaking about Instex, which was a reporter’s question, he said: “On the day the United States withdrew from Borjam, the European parties announced that Ms. Mogherini and the remaining members of Borjam, both in writing and in meetings, would guarantee the lifting of sanctions. We waited a year and took some steps to reduce the commitments in order to restore the balance in Borjam within the framework of Borjam. One of the things that Europe said it would do within that framework was a financial transfer, first they said SPV, then Instax, and we said if you can do it, we will help.

“This is the responsibility of Europe,” said a State Department spokesman.

“Our policy is very clear,” he said in response to a question. The United States has grossly violated its obligations under Resolution 2231 and must return to its obligations in the UN Security Council, and we must see it and it is not on paper. If the other party fulfills its obligations, we will be on the path of Barjam all the way we went and we will return the path of reducing the obligations.

In response to a question, Khatibzadeh said that every effort is being made to get the vaccine to the people.

In response to another question, the senior Iranian diplomat noted: The ambassadors of Germany and France were summoned for their interventionist actions, and we explicitly stated that I would not accept their statements. Ambiguous statements and double standards are things that have been mentioned many times.

Khatibzadeh stated: The only way of cooperation is the way of mutual respect.

Regarding the visit of the Deputy Prime Minister of the Republic of Azerbaijan, he said: “We have serious border issues and agreements on bilateral cooperation on infrastructure and water and dam issues, which is important in this regard.”

In response to another question, the spokesman for the diplomatic service said: “We do not talk to anyone about issues related to national interests and national security and defense, nor do we allow anyone to joke with us in this regard.” They know better than anyone what the roots of unrest in the region are. Today, there is a flood of exports of weapons and special and advanced weapons by European countries to the Arab countries of the Persian Gulf, and they have turned the region into an arsenal of their deadly weapons.

“The Yemeni people are currently under siege and 20 million Yemenis are starving, while they are equipping the aggressors with the deadliest weapons, and these countries are not in a position to make these statements,” he said. The siege of the Yemeni people must end as soon as possible.

In response to a question, the senior Iranian diplomat said: The Foreign Ministry cannot be responsible for the duties of other organizations. The State Department plays an important role in trade cooperation.

In response to a question, Khatibzadeh said: “We have very close relations with neighboring countries and work with Central Asia and the Caucasus.” Trips with countries in the region are ahead. One or two countries try to speak on behalf of the others, and we do not value it very much. What is related to Barjam is written in the agreement and there is nothing left for the future to be discussed in the future. Countries that have tried to buy their security from outside have invaded to the detriment of the region and the source, and have pursued aggressive policies, and the day they reach maturity to resolve regional issues within the region is the day we can negotiate in regional arrangements. Our arms have always been open for dialogue about the region, and all countries must pay attention to the realities on earth and speak to the extent of their dignity and status.