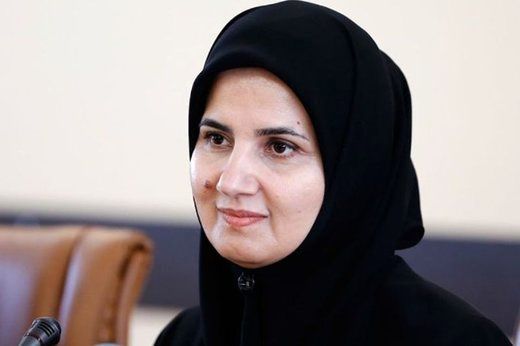 Leia Junidi, the Vice President for Legal Affairs, talked about the parliamentary law and the leadership action to lift the sanctions, the dispute between the government and the parliament, the MPs’ complaints against the government, etc., part of which you can read below.

Criticize, not swear, at least not swear too much

In the case of Borjam, the atmosphere is very politicized, while the fact is that although Borjam came to fruition in the Rouhani government, it was the result of the gaze and support of the entire government. ; Conflicts that marginalize people’s rights?

You see, I have nothing to do with the factions, I do not criticize the faction for the faction itself. Political competition is good and should be. Part of the health of the structure of political power is in the formation of political competition, so let’s not be mistaken, the openness of the competitive environment of factions and political parties together in a sense means the exercise of political rights of the people and should be, because this is the process of transparency of power Political and the efficiency of the political system will follow. You have to be from every faction in order to get votes from the people, you have to do your best. So the competition itself is not a problem at all, it is not a problem to criticize each other severely, but to criticize, not to say insults, at least not to insult (laughs) too much. I like the process of criticizing each other, I think these are lost in political thought and action in Iran. It should be, the constitutions have come into the world to systematize the structure of political power and to determine the rules of the game and political action and specifically legitimate political action, so competition and criticism as the most important means of competition are not flawed. But in both factions, we must have intellectuals who sit together and, by defining the boundaries of the serious competition they have and should have, come and say that there is a red line for the interests of the country and the people that they must draw together. Unfortunately, this maturity It has not yet taken shape in Iran, this is our problem today, if people free themselves from the party and the faction and throw a spotlight on their rivalry from above, they will realize that we still have to go through some steps to learn mature political competition.

Mature political competition is very important and part of it has to do with tolerance and tolerance for each other. Yes, Borjam is a document that this government (of course, the 11th government) has gone after and written it. It is not perfect. I, as a lawyer, have some reflections and considerations in it, but today that we are sitting here, it is better whether this document is or not. ? Today, I say in my own assessment, it’s better, this is in the public interest, there is nothing wrong with criticizing each other to some extent, but let us remember that we must demand our maximum rights in international negotiations. So let’s maintain the position and position of criticism and raise and accept the problems. But at the same time, we must create a reasonable environment in which we can maximize the benefits for the country and the people based on the negotiations and interactions that may take place. This requires political rationality and maturity. Of course, I acknowledge that it demands a higher degree of political ethics and rationality.

In your opinion, did the recent parliamentary resolution, called Strategic Action to Lift Sanctions, have this degree of maturity and rationality?

The parliament believes that it wants to do something positive that will help in the negotiations. Of course, they could interact better with the government, and even if they were to do so, the constitutional provisions could be observed much better and the framework of our international obligations seen. The most appropriate time to happen.

Could one of the harms of delaying the lifting of sanctions be?

Execution must be a rational execution, if its execution is wise and it is an effort to reconcile all the pillars of the government in the manner of execution, then it can be problematic, because this law has entered the executive and subject matters, not the verdict. This is a law that has entered the field of implementation, that is, the distance between the legislature and the executive has not been seen in it, so it has revoked the executive powers that belong to the executive, if not at least in the appearance of some phrases and words. Has limited.

Does the government implement this law in accordance with the constitution and its executive powers?

The government has the right and the right to implement this law, like all other laws, with an interpretation in accordance with the constitution. In particular, consider Articles 57, 60, 75, 125, 134, 138, 176 and Chapter 3 of the Constitution and implement them correctly, adhering to the principles of interpretation.

In one of the clauses of this law, the issue of punishment for Mustankaf is discussed, what can be done with this clause?

This style of criminal law has never been common in criminal matters. In criminal matters, you have a principle as the principle of equality of people before the law, the highest example of this principle is always observed in criminal law, we also have a double sentence in the constitution called the principle of legality of crimes and punishments! Why does everyone want the peak of equality of the people in the penal code? Because in civil law one can derive some sentences by interpretation, but the sentence on crime and punishment can not be interpreted, I want to say that the principle of legality in the field of punishment is stronger than anywhere, because he wants his rule, the rule of law, the absolute legality of crimes and punishments. In the Penal Code, if you read every article of the Penal Code, it starts with the word everyone, it says that anyone who acquires illicit wealth or property, his action is subject to this punishment or anyone who illegally seizes other people’s property, his action is a crime and is subject to that punishment, this “everyone It is a sign of equality, the method mentioned in this law is not the standard method of writing criminal laws and its appearance does not comply with the constitutional criteria. This is not a criterion that we have in the penal code, because it is addressed to a person, and ironically it is addressed to the highest executive official of the country and elected by the people. Yes, the president or me in the position of an ordinary citizen. We are the crime of acquiring illegitimate wealth, regardless of whether we are the president or a citizen or an official between the two! The law says that whoever does this, but the method of addressing a specific person who is responsible and the recipient is subject to this punishment, is a method that is not compatible with our legal tradition and the requirements of the law, especially the penal code. The method of expressing the sentence, that is, the punishment, is not a method of regularity. It is not true that the punishment is considered from 2 to 5 degrees, considering that the punishment should be considered from its minimum to the maximum, they should have said 5 to 2, but on the contrary, they said 2 to 5. Another important problem is that they have brought 4 large realms of punishments under this sentence, if you can say 2 to 5 legal logic dictates that you can probably say 1 to 8 and that means from zero to one hundred punishments! In this case, it means that you do not consider any specific punishment whose limits are known, that is, the four major areas of punishment, which is why I say that the principle of legality of crimes and punishments has not been observed.

No, these are not numbers. Finally, as far as I asked about the recent insults from the deputy’s lawsuits, there are 2 to 3 cases in which the deputies filed a lawsuit for insulting and threatening the president, in these cases, because it was very acute. We have informed the prosecutor. In fact, since most cases occur in cyberspace and are covered by Article 18 of the subsidy offenses, we believed that the prosecutor himself should step in and pursue the matter, and what we are saying is in fact only a declarative aspect.

We are not interested in filing lawsuits for insults, slanders and such issues at all, and you should know that this is the last thing that the Vice President for Legal Affairs wants to do. I hope that our public culture will grow so much that we will no longer pursue these issues and talk about more important issues in the country.