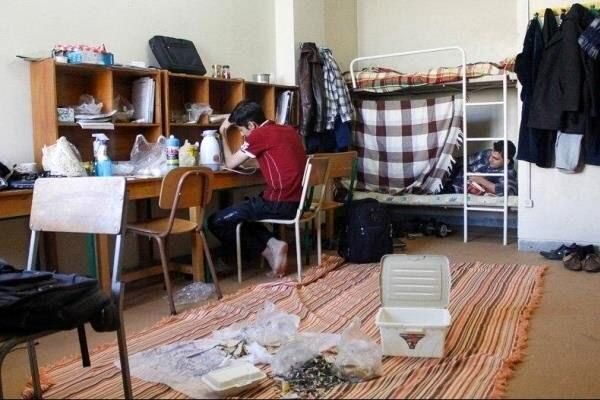 According to reports EconomyOnline Quoted from trust; The high number of students seeking accommodation in dormitories (especially in Tehran) and the often old and limited facilities of universities have resulted in the emergence of rooms that return to the suite at least four to six heads when you open the door. These are students who have been able to cross the entrance exam barrier, distance themselves from home and family, to pile on each other in rooms and suites amid the disability of the university welfare departments, and to study and live in the same situation. Reaching the same bed is itself an anecdote that has become more complex every year, to the point where the so-called self-governing dormitories have emerged to make up for what the university cannot afford; At least double the cost and minimum facilities. With the outbreak of another corona, all of this was smoked and released into the air. Universities issued ultimatums to students, rooms were emptied, and thousands of students returned from their campus to their families’ hometowns. Some stayed in the dormitory on a thousand terms, some got a house, some moved to private pensions. Months after Closing of dormitories, You read the story of three dormitory students from their student life after Corona.

Zahra, a bachelor’s degree student in industrial engineering at Al-Zahra University, is one of the students whose last memory of staying in the dormitory dates back to February of last year. The university closed the dormitory as soon as it was officially confirmed in the country, and this closure continued until June: “My belongings were left in the dormitory and they kept the dormitory closed until June. The university said at the time that we would close the dormitory for a week, and I only picked up two books and would be back next week. Yahoo later revealed that the dormitory was to be closed. All my clothes were there, as were some of the books. “Some children left more essentials, such as their laptops, in the dormitory.” You mean, like, saltines and their ilk, eh? “The university has announced that if you have devices such as laptops, books and mobile phones, you can email us to send them to you. Three representatives were present to do so, provided that the children’s belongings were not in a locked comedy. “He had access only to what he could, and you were responsible for everything.”

since Dormitory life The students turned around and all went to their hometowns, studying online but having to leave the city What troubles might arise when a student living in a city other than his or her place of birth and life changes in this way? Specifically, he says about student life in Tehran: “Generally, a large number of students who come and study at Tehran universities remain in Tehran. Of course, I say this about my own distances. Some of them find work or meet someone and stay for marriage. Many of those who had found work in Tehran got into trouble, and the conditions in Corona made things even more difficult for them. “Many people around me gathered and were forced to move in together. They preferred to move in but not return to their hometown.” He himself is one of those who wanted to stay in Tehran. For him, of course, there was another solution: ‌ “My family came to Tehran and I did not have to return.” Complete classes are held online. The only exception to Al-Zahra University, like many other universities, is that PhD students and those senior students working on their theses and dissertations can stay in the dormitory with a permit. In this way, as the number of residents in the dormitory decreases, each of these students can be housed in a room; The situation in student dormitories used to be like a miracle: “Of course, when the situation in Corona became very acute, they also had to leave the dormitory.” At present, like other students at his university, he has no vision for the future or the next semesters. So far, the university has not commented on the next semesters or possible scenarios: “Only in the summer did all the students move to Tehran from all over the country to unload their belongings. Many families did not object at all to their child going to Tehran just to pick up equipment in these coronary conditions.

I know that in the Polytechnic (Amirkabir) the children were threatened that if you do not come, we will take your summer rent from you. “They said at Al-Zahra University that if you do not come, we will evacuate ourselves, and if it breaks down, we will not be responsible.” The only thing the university told them was that summer when they were told to take whatever they needed when they emptied their belongings, because it is not clear when the dormitory will open.

A student at Allameh Tabatabai University, one of the few graduate students currently living in the dormitory, told Etemad that continuing to live in the dormitory is now beyond Haft Khan Rostam: ‌ “It is very difficult to get dormitory, even those who They are seniors and are in their final semester unless their proposal is approved. In that case, they can only stay for 20 days to pursue their dissertation work, and then if they want to renew, they have to get the letter again. “Otherwise, they have to evacuate to make room for others.” Why did you decide to stay in the dormitory in this condition? “Because of my working conditions.” At the moment, he says with these strictures that staying in the dormitory does not seem dangerous because keeping distance from others is possible and of course an order: دست “In the dormitory, each room is given to one person, and for example, large rooms for six or seven people are given to two people. They warn of gathering in rooms and no one should go to other people’s rooms. “That means protocols are being followed.”

For this reason, he does not see anyone other than going out in the dormitory and stays in the same room more: قب “Previously, it was the students’ job to clean the suites, but now the staff does it themselves.” After the corona outbreak, the dormitory crew is supposed to make sure that the washing, disinfection and cleaning work is done regularly. It seems that the deteriorating condition of Corona caused those who knew him to return home and not be very dissatisfied with the loss of the dormitory. However, those who worked during this period were forced to settle in private pensions.

The collapse of the union councils

Yousef, a student at Lorestan University, has returned to Khuzestan and his place of residence since the beginning of the corona. He did not see the dormitory again in March of last year, a week after the parliamentary elections: “The day the news broke that the corona virus had spread, we were given two days to evacuate the dormitory. They themselves closed the university. “Since then, they have even convened practical classes to hold in one day, so no one is in the dormitory anymore.”

From the very beginning of the closure until now, I think what is most felt is the decline in the quality of education and the increase in Internet costs: “There was talk of making systems free and not reducing the volume of (Internet) packages, but that did not happen. “When we went to university, we did everything in class. Now, after classes, we just have to start writing, and the professors have increased the pressure of work and exercises to make sure.”

Has the university ever told you what might happen in another month, another semester? Have they given you any explanation for the future? “No, nothing has been said. “They are just extending the closure of the dormitories from semester to semester.” What if they did not close the dormitory? Was he willing to stay in the dormitory himself? “No. “Because it is not in a good health condition at all.” Their room normally has six people, and he says that if one day the dormitory is to open before the end of the epidemic, there is no way to maintain social distance and sanitation: اتفاق “Incidentally, some of the rooms are even bigger than they intended. The dormitory has four-person and six-person rooms, but there are a number of people in these rooms who are called “surplus”, ie, for example, one person is added to a six-person room. “They get letters from the dormitory affairs and add them to the room, but they no longer have a bed and have to sleep on the floor.”

This is just about when someone basically finds a place in a dormitory owned by a university: “The situation gets worse when there is no dormitory at all for first and second semester students. Most are sent to self-governing dormitories. If the semester dormitory costs 200 thousand tomans, the self-governing dormitory costs 500 thousand tomans, even in a much lower condition and in terms of welfare and health. “That means they don’t even have a reading room.”

The prevalence of coronation in some dormitories and universities seems to have been a boon to get rid of these equations of student numbers and space and facilities. Students study at home, and as he says, not even the free internet is included: This taste does not allow active students to enter the union council. They start rejecting the candidates regardless of the statute. When strong students can not enter the union council, the voices of other students are not heard. “Only a handful of representatives will go to the council.” Corona made the situation even more chaotic. Outbreaks of disease and physical closure of universities in many universities prevented union council elections from being held or did not reach the quorum: ‌ “No elections were held, but they appointed a union council for us. How’re you? it is not clear!”