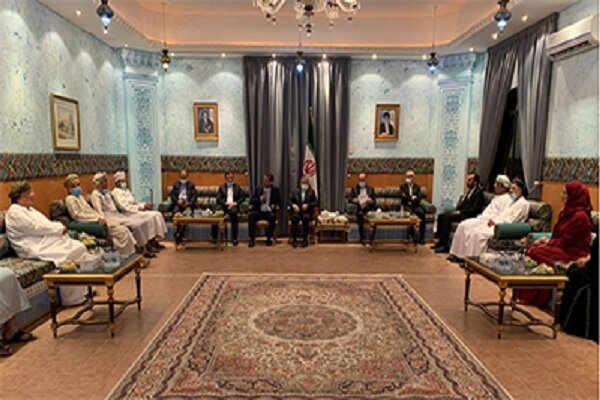 According to Mehr News Agency, Seyed Reza Salehi Amiri, former Minister of Culture and Islamic Guidance and boss The National Olympic Committee of the Islamic Republic of Iran, in order to participate in the meetings of the Asian Olympic Council Muscat He had traveled, met and talked with personalities and activists in various cultural and literary fields of the Kingdom of Oman.

In this program, which was coordinated by the Iranian Cultural Council and invited by the Ambassador of the Islamic Republic of Iran in Oman, Omani personalities and cultural activists, referring to the good historical and cultural relations between the two countries, expressed their strategies for deepening cultural relations and cooperation between Iran and Oman paid.

Seyed Ali Mousavizadeh, our country’s cultural advisor in Oman, in his speech, mentioned the role of officials, thinkers and activists participating in the development of cultural relations between the two countries and introduced the Omani guests.

Salehi Amiri in the continuation of this meeting, while explaining the cultural policies and expressing the various successes of our country in the world arena, stressed the need for interest. Giri He emphasized the existing experiences and the development of cultural exchanges between Iran and Oman.

He with Presentation Explaining the cultural heritage of Iran in recent centuries, he described it as rich and valuable and said: “Unfortunately, the enemies are trying to paint the image of Iran with the issues Nuclear and missile link in While Iran has one million heritage works and forty thousand of them have been registered so far, and if UNESCO does not impose restrictions on the registration of valuable works, we can register all the works for the next one hundred years.

Afterwards, a group of participating guests expressed their views on the cultural relations between the two countries.

خمیس العدوی، boss Oman Literary Association of the Ministry of Culture, Sports and Youth of Oman LiteraryReferring to the proposal for the establishment of the Iran-Oman Friendship Association by our country’s cultural advisor, he said that the proposal was a cause for satisfaction and deepening of relations between the two countries and said: “He became acquainted with the Islamic Revolution of Iran as a child and made several trips to this Had a country ام And we welcome any cultural activity in order to develop cultural relations.

Kamal Al-Lawati, an Omani cultural activist, pointed out the need for Omani thinkers and people to become more familiar with Iranian culture and history. and say: We need more seasonal activities from Iran in Oman.

Ibrahim ابو Elias البلوشی, Another participating activist, referring to the cultural and linguistic exchanges between Iran and the Arabs, stressed the need to translate and publish modern works between Arab countries, especially Oman.

Ms فایزه البلوشیه, Writer, journalist and member of the Oman Literature and Writers Association, explained his numerous trips to Iran and wrote a travelogue of these trips and said: “Written cultural works by Iranian and Omani cultural activists are very few and should be considered in this regard.” More to be done.

Sultan Bin Majid العبریIn his speech, the former member of the Omani Parliament, while emphasizing the strategic importance of the Islamic Republic of Iran in the region and the Islamic world, called for a greater presence of Iran in the field of culture and tourism and said that now, for example, religious channels are much more than satellites. Is to show the tourist attractions of Iran, so there should be more information on these matters.

Saeed الصقلاوی, Member of the Shura Council and boss The Oman Literary Association also discusses the importance of addressing the issues Culture in order to expand relations between the two countries Presentation کرد. He referred to a part of Iran’s common cultural and historical heritage and announced his readiness for the Oman Writers’ Association, in cooperation with the Cultural Counselor of the Islamic Republic of Iran, to hold meetings both in cyberspace and after the lifting of coronary restrictions in real space.

Ali Najafi, Ambassador of the Islamic Republic of Iran, also thanked the presence of Omani cultural figures and writers in this The meeting said that the continuation of meetings with cultural activists of this country and the use of their points of view caused the development and deepening of cultural relations.