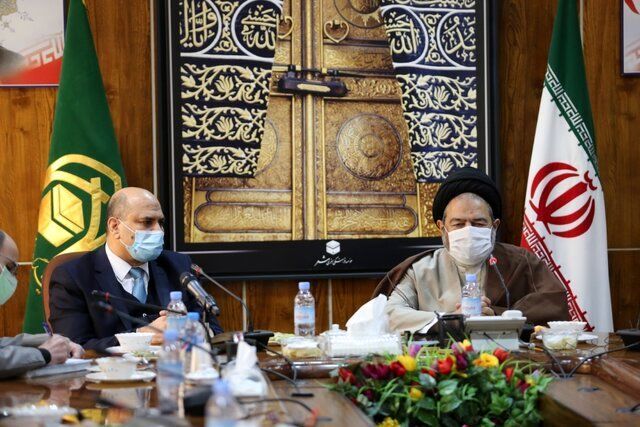 According to Eqtesadonline; Hojjatoleslam and Muslims Seyyed Abdul Fattah Nawab, in a meeting with Nasir Abdul Mohsen Abdullah, pointed to the level of cooperation between Iran and Iraq in the field of Hajj and pilgrimage and the movement of millions of Iranian and Iraqi pilgrims through the borders of the two sides throughout the year. The ground for Iranian pilgrims to travel to the holy shrine in Iraq should be re-established.

Referring to the presence of Nasir Abdolmohsen Abdullah in the past as the Consul General of the Republic of Iraq in Mashhad and familiarity with the activities of Hajj and Pilgrimage, he said: “We expect this experience to provide more facilities and facilities for Iranian pilgrims to travel to the holy shrines and Take advantage of pilgrimage trips.

The Iraqi ambassador in Tehran, referring to the friendly relations between the two countries and the unity and interest of the two nations of Iran and Iraq, said: “Corona has reduced the pilgrims’ trips to holy places in the two countries and we intend to resume these trips by improving health conditions.” .

He announced his readiness to issue visas for pilgrim caravans that will be organized in the future in the form of Hajj and Pilgrimage Organization to travel to Iraq, adding: “Pilgrim cities in Iraq have no problem in welcoming Iranian pilgrims and are waiting for agreements between relevant authorities.” They are in two countries.

The representative of the Supreme Leader in Hajj and Pilgrimage Affairs also stated that after the closure of Hajj, Umrah and Atbat pilgrimage trips, 21 committees have been formed in the Hajj and Pilgrimage Organization of Iran and are optimizing programs in this field. He welcomed the pilgrimage and invited Hojjat al-Salam wal-Muslimin Sheikh Massoudi, chairman of the Iraqi High Council for Hajj and Umrah, to visit Iran.

Following the meeting, which was held at the Ba’ath Party of the Supreme Leader, Hojjatoleslam Sohbatullah Rahmani, Deputy Minister of Hajj and Pilgrimage Organization, reported on the organization’s actions and follow-ups regarding pilgrimage trips to the holy shrines of Aliaat and said: And emphasizes the planned Iranian pilgrims to Iraq in accordance with hygienic procedures and maintaining the safety and dignity of the pilgrims, and has had good talks with the Iraqi ambassador on how to send them to Iraq in the future if the coronation situation improves.

In this meeting, which was held on the eve of the anniversary of the martyrdom of Sardar Qassem Qassem Soleimani and Abu Mahdi Al-Mohandes, the representatives of Iran and Iraq honored the memory of these two martyred commanders of the Resistance Front. The Iraqi ambassador also called the US terrorist operation on the way to Baghdad airport cowardly and said: “These two honorable martyrs were in the hearts of the two nations of Iran and Iraq and the people showed their love and interest in the funeral of their bodies in both countries.”

The representative of the Supreme Leader in the affairs of Hajj and Pilgrimage also said: The martyrs Soleimani and the engineer sacrificed their lives and blood in defense of Islam and I am sure that God will punish the oppressors for their deeds.