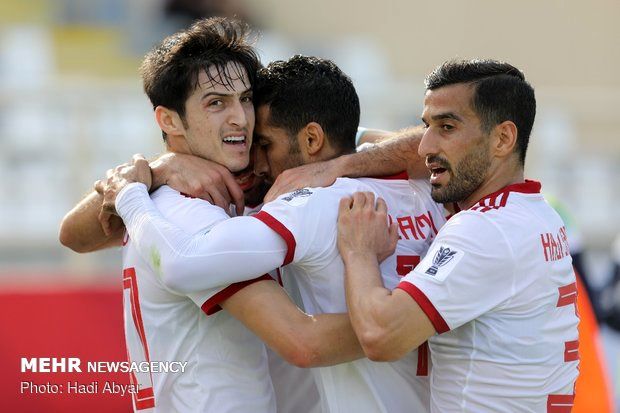 According to Shaman News, the match between the national football teams of Iran and Vietnam started at 14:30 today, Saturday, at Al Nahyan Stadium in Abu Dhabi. Iran had defeated Yemen by five goals in its first match, but Vietnam lost 2: 3 to Iraq. Handed over. The first half of the match ended with a 1-0 victory for Iran. Sardar Azmoun scored for Iran in the 38th minute. The Iranian national football team played against Vietnam with the following people: Alireza Biranvand, Vera Ghafouri, Ehsan Hajosafi, Morteza Pourali-Ganji, Omid Ebrahimi, Mohammad Hossein Kananizadegan, Saman Qudus, Vahid Amiri (63 Ahmad Noorollahi), Mehdi Taremi (63 Mehdi Torabi) ), Ashkan Dejagah and Sardar Azmoun. 2nd minute: The Iranian national team started the game aggressively and tried to get close to the Vietnam goal. In this minute, the national team got a free kick behind the penalty area, which was returned by Ashkan Dejagah. 5th minute: The Vietnamese, who were not very close opponents, appeared in the counter-attacks near the Iranian goal, but could not create a danger on the Biranvand goal. 7th minute: Ashkan Dejagah’s good steal and deep pass inside the penalty area provided an opportunity for Sardar Azmoun to have a one-on-one with the opponent’s goalkeeper, but Sardar reached the ball a little late and the opponent’s goalkeeper blocked the ball. 12 min: The Iranian national team, which was trying to endanger Vietnam inside the penalty area, launched an attack on the opponent’s goal, but Vietnam’s high-defense defense did not allow the team’s goal to be seriously endangered. 15th minute: Ashkan Dejagah was able to send a deep ball into the penalty area with his good move, but Saman Qudus also arrived late and the opponent’s goalkeeper blocked the ball. 18th minute: Mehdi Taremi received a yellow card from the referee for a foul on a Vietnamese player, which was unnecessarily protested by Ki Roush. 25th minute: The defense barrier of the Vietnam national team continued to resist the Iranian attacks, and despite the dangers created by the students of Kai Rouh, the opposing players defended the goal with their claws and teeth. In this minute, Sardar Azmoun’s strong shot was returned by the opponent’s goalkeeper. 35 minutes: The process that prevailed on the field from the beginning of the game continued and the Iranian national team was in a lot of attacks against the Vietnamese with many players defending multi-layered. 38th minute: Vera Ghafouri left her direct defender from the right wing and sent the ball deep into Saman Qudus, who also crossed the ball, but Sardar Azmoun opened the opponent’s goal with a timely presence and a header to the defensive barrier. Vietnam to be broken. * 45 mins: The Vietnamese, who were largely out of defense after the goal, tried to score in the final seconds, but failed to put Biranvand’s goal in serious danger until the first half ended in a 1-0 victory for Iran. . 51st minute: Vietnam, who had brought in a quality striker in the second half, could have opened the Iranian goal in this minute, but Alireza Biranvand did not allow the Iranian goal to be opened with a timely exit and the game was drawn. 52 minutes: Sardar Azmoun had a chance behind the penalty area, which was blocked by the Vietnamese goalkeeper when the ball reached Tarmi, but the game selfishly drove the ball out from a long distance. 60 mins: The Vietnamese made a second substitution to get closer to the Iranian goal and put a more offensive game on the agenda than in the first half. If the team loses to Iran, it will lose its chance to advance. 63 minutes: Kay Rouh made two simultaneous substitutions in the second half to improve the game and replaced Mehdi Torabi and Ahmad Nourollahi with Tarmi and Amiri. 69 ‘: Sardar Azmoun wins the ball behind the Vietnamese penalty area and steals the ball from the opponent’s defender with his good physical strength and opens the Vietnam goal for the second time inside the penalty area with an accurate shot with his left foot. The full report of this game will be completed in this news