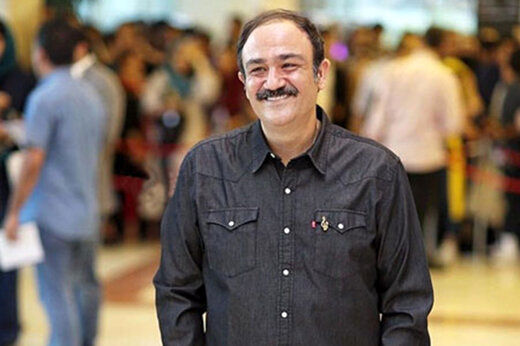 Mehran Ghafourian entered the program with his new appearance in a special Khondavaneh program on the occasion of Nowruz, which surprised everyone in the studio.

Mehran Ghafourian was born on Molavi Street in Tehran and grew up in Tehransar and Darya neighborhood. His father is a naval captain from Tehran and his mother is a teacher from Tabriz. He has a brother named Mehdi, who is 5 years older than him and composes.

For the first time in 1373, at the age of 20, at the suggestion of a friend, he participated in the testing of item 39 program directed by Dariush Kardan and was accepted.

But the peak of his fame was to make a TV series under the sky, which was one of the best and most popular TV series in recent decades, which he also made the second and third series, and he also played the role of Behrouz Khali Band.

In addition to working in cinema and art, he has a second job and has a nuts store and pastry shop.

In recent days, rumors of the suicide of Mehran Ghafourian, our country’s tasteful and humorous actor, were published on social networks and some media, which forced him to react; An instructive response in which he points to his health and urges people to stop judging each other.

In a telephone interview about his suicide rumors, he said: “I forgive those who made rumors for me, maybe my mother and wife are heartbroken, I ask them to forgive, basically people should be careful that No one’s right to their necks.

The actor went on to explain, “Imagine how a mother feels when she hears the news of her son’s suicide.” Suicide is a great sin and there were many other rumors, thank God there is no news right now.

It is interesting to know that a similar rumor was made about him in June 2011. At that time, he had a conversation with Ideal Life and about the rumors that had arisen for him, he said: “I accept that I am one of those actors who have created a lot of margins and rumors for me.” In general, I consider anything that hits my character to be a rumor and a sideline.

He had said about the mentioned rumor in 1990: The rumor-making case started for me when I was transferred to Imam Khomeini Hospital in Mashhad due to food poisoning.

When I woke up, I saw some people above me taking pictures of me. The next day, Mehran Ghafourian committed suicide in the headline of the Quds newspaper in Mashhad. Yes, I have committed suicide, but to see Mr. Imam Reza (AS) is nothing else! (Of course, I mean unrealistic suicide).

Moral characteristics of Mehran Ghafourian from his own language

Unlike the characters I play, I am very serious and I follow all my work seriously while working. Those who have worked with me are aware of my moral character, but in general I try to do everything on time.

Mehran Ghafourian married a girl named Arezoo on January 4, 2015 at the age of 40. The two met in a shopping mall and then decided to get married. The result of the marriage of a girl named Hannah is in February 1997.

Due to the loss and wear and tear of her hip joint and her heavy weight, she had to undergo weight loss surgery once, which says that she lost more size than I have now, and now she has lost a lot of weight with her diet.