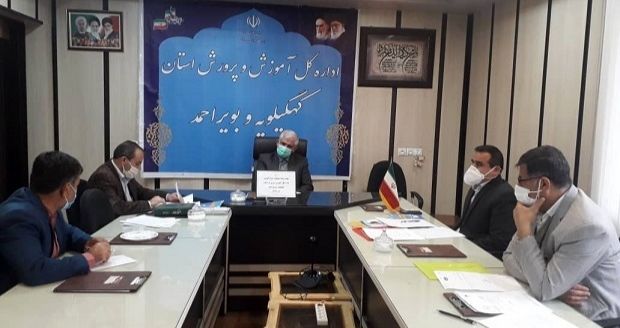 According to the Borna news agency from Kohgiluyeh and Boyer-Ahmad provinces;The director general of education of the province said: in 1957, the target population of the target group of 10 to 49 years old in the province was 28% literate, which according to the 1995 census and literacy activities after that, this amount has reached more than 93%.

Hadi Zarepour stated on the first day of the literacy week entitled Literacy and Media: Literacy activities are being carried out this year with the coverage of 4,500 people in three periods of literacy, transfer and consolidation.

He said: “This year, along with literacy, 120 people also use computer training.” The director general of education of the province said: 2,200 people will participate in the two courses of transfer and literacy in the reading plan with the family and 650 people will participate in the reading circle project … in compliance with the health instructions.

He added: “With the participation of the prayer headquarters, the key to heaven prayer plan will be implemented by teaching the practical rules of prayer and covering 2,664 literate people.”

He specified: in the evaluation of literacy activities by the organization in 25 indicators in the country, the deputy director of education of the province in 23 indicators is higher than the national average and in 13 indicators is ranked first in the country and is one of the top four provinces in the country. It was announced by the Deputy Minister of Education in a letter to the governors of Kohgiluyeh and Boyer-Ahmad.

The director general of education of the province said: holding literacy support councils, quality improvement groups, exams for question mark competitions and reading books with the theme of the Supreme Leader’s slogan are other activities in the field of literacy.

He added: The literacy development project for nomadic women and girls with the participation of 400 people is being implemented in Charosa, Dishmuk, Margon, Lodab, Dena and Dehdasht regions.

The deputy director of education of the province also said: on the eve of the anniversary of the martyrdom of Sardar Haj Qasem Soleimani, a book reading contest entitled Sardar Delha from the book Sarbaz Vatan will be held for literate students.

Seyed Hamdollah Khahash Nik stated: 16 local learning centers are active in the province and 850 people in these centers use skills training.

He further said: “Literacy activities are carried out with the participation of 12 institutions and non-governmental organizations and the establishment of a memorandum of understanding with 23 executive bodies and institutions.”

The deputy director of education and literacy of the province stated: The plan to accelerate literacy in cities and regions. Dehdasht, Lande, Bahmii; Charosa Dishmuk. Literacy is lower than the provincial average.

He added: The festival of the best models of teaching in cyberspace was held in the province of Corona.

According to the province’s deputy director of education, more than 800 educators and 66 educators work with literacy.

From the 1st to the 7th of January, it has been named as the letter of the literacy week.