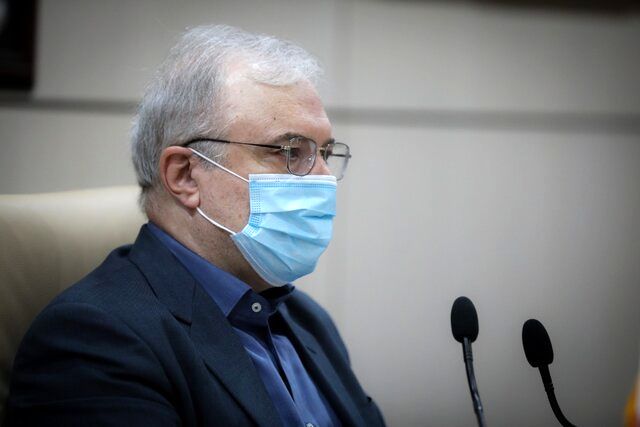 According to Eqtesadonline, quoted by IRNA, Saeed Namaki, in a meeting with Parviz Fattah, President of the Foundation for the Underprivileged, congratulated nurses across the country on the occasion of Nurse’s Day and added: They had to swim in the ocean with their hands and feet tied. Contrary to what the Americans claim, and even the Europeans who followed them, medicine was provided to specific patients and medical equipment for the worst days of the country.

He continued: “In addition to the lack of resources and the problems and bottlenecks that were created for us, this period was very breathtaking and we were embarrassed by the people and could not speak, because the morale of the people was weakened and the embarrassment of our colleagues. We learned that we were unarmed and unarmed commanders. This situation was difficult to manage, but with the grace of God and the care of various agencies, it was compensated.

The Minister of Health said: I spent many days and nights in the building of the Ministry of Health and wrote down my memories. A number of people were kind to us, but some people, such as Mr. Fattah, were especially kind. He said many times that we are with the Ministry of Health and all the hotels, facilities and resources of the Foundation for the Underprivileged are next to the health system, and this was without compliments and we counted on it.

“Fortunately, today our situation is much stronger than in previous months,” Namaki said. Today, at the meeting of the National Corona Headquarters, I said that you should go back to the beginning of the disease curve in the country and see how close the distance between patients’ deaths and their hospitalization was, and see today how far this distance is from each other, which is the result of 10 months How we were able to save Covid 19, a patient who did not have a specific drug and definitive vaccine, from death by God’s grace with his proper care.

While appreciating the efforts of the managers of the Ministry of Health against Corona, he said: “Today we have a lot to say to the world and we are in a very favorable point in disease management that the result of the country’s capabilities can be found in the disease figures in the country.” witnessed. See the position of Iran and other countries on international sites today.

The Minister of Health continued: “Iran’s population is at least a quarter of the United States, but the death rate of American patients, except for cases that occurred in nursing homes and homes and is not registered, is at least 6 times the death rate of Iranian patients, while the United States until three months ago , $ 111 billion was spent in the health sector alone, but we have not yet received part of the $ 1 billion National Development Fund, which was the result of effort, zeal, courage, empathy and harmony in the country.

Namaki added: “Today, we thank God that not only did we not achieve what was predicted for us, which was 7 to 8 times the number of deaths today, but all countries increased the number of deaths of their patients, but in Iran, this trend It diminished and showed the divine promise that in oppression, the faithful servants, sincere and standing in the face of oppression and oppressive attacks, will not be left alone.

He stressed: “I believe that development in countries like ours is not sustainable if we do not look at the underprivileged and provide support to the poor.” I have always said that instead of an environmental or health annex, we should have an annex to support the poor in development discussions, otherwise we will never achieve sustainable development.

The Minister of Health said: “There is a difference between scholars of development science that some say that development is first after supporting the poor, but some theorists say that the poor should be supported first and then go towards development, but I believe that these are nothing.” There is no contradiction between them and development infrastructure can be seen by attaching support to the poor.

Namaki continued: “We must define a mechanism between the government and support institutions to further support the poor, otherwise, their survival will be difficult.” One of these areas is the health sector. In recent years, the government has taken great and valuable steps to keep doctors and specialists in disadvantaged areas, increase the number of hospital beds and infrastructure.

“I have asked my colleagues to review the infrastructure of the health system,” he said. In the first days I came, I asked my colleagues to define new criteria for the fair distribution of facilities, services and resources in the country. We can not see the south of Kerman, South Khorasan and Sistan and Baluchestan with the same population quota that we see in Alborz or Mazandaran provinces, so we have to provide an ashantion of health services in deprived and border areas with a dispersed population.

Referring to the establishment of nomadic health centers across the country, the Minister of Health said: “On the first day, I told my colleagues why nomadic nomads should have anxiety about childbirth, vaccination, high blood pressure and diabetes?” We designed 400 mobile health houses for the country’s nomads and selected a member of the tribe and provided him with the necessary training to accompany the nomads in summer and winter.

“In some areas, there may not be a need to set up a comprehensive health center, but we should provide smaller but climate-appropriate complexes for low-income people, which I think could be one of the joint tasks between the Ministry of Health and The Foundation for the Underprivileged and instead of 40 comprehensive health centers, 400 smaller complexes can be built and its manpower can be provided by the Ministry of Health and Physical Space by the Foundation for the Underprivileged for the most deprived areas of the country.

The Minister of Health continued: These centers can be set up in provinces such as Kerman, South Khorasan and Sistan and Baluchestan or provinces with low population distribution. If these centers are set up, we will help the survival of the population in some areas of the country, the development of health infrastructure and progress in other areas.

“Although I am the Minister of Health for all people, rich and poor, my biggest motivation for accepting responsibility in the Ministry of Health was to work for the rest of my life to eliminate deprivation,” Namaki said. Tehran, as a referral center for patients across the country, has had the least development of hospital beds in recent years, and several projects are currently under construction in Tehran, Islamshahr, Pakdasht and the city of Quds.