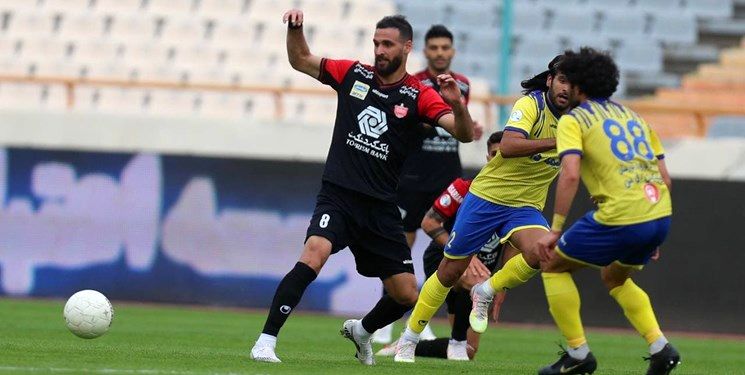 Sending the ball to Mehdi Torabi and his collision with the opponent’s goalkeeper caused the referee to announce a penalty. This was while Torabi hit his ball and the ball went out of the goal.

Omid Alisha missed a penalty kick and his ball went out of the top of the goal.

Masjed Soleiman’s free kick was hit by Mohammad Balbali, who turned it into a corner with a good reaction from Hamed Lak.

Sending Saeed Aghaei from the right into the Masjed Soleyman oil penalty area and hitting Mehdi Torabi on the head led to the whites’ first goal.

Ahmad Noorullahi’s header went dangerously out of the oil gate of Masjed Soleyman.

Saeed Aghaei’s long pass was accompanied by a dangerous shot by Vahid Amiri.

Omid Alishah sent a free kick in favor of Persepolis and Shahriar Moghanloo’s header was not included in the frame.

The influence of Persepolis came from the left and the pass went out for Ahmad Nourollahi with a strong shot by this player.

The spectacular blow of Moghanloo city hit the post of Masjed Soleyman oil gate behind the penalty area and was then repelled by the team’s defenders.

Vahid Amiri’s influence from the right and his pass for Alishah turned into a corner with a good reaction from Masjed Soleiman Oil Goalkeeper.

Masjed Soleyman Naft players’ corner kick entered the goal of Hamed Lak and Persepolis with a poor Meysam kick to draw the game.

Dangerous counterattack by Naftis by Mohammad Balbali with a final shot by Sasan Hosseini went dangerously out of the gate of Persepolis.

The dangerous attack of Persepolis did not go anywhere in the hustle and bustle of Masjed Soleyman oil penalty area.

The mistake of Masjed Soleyman Oil defenders behind their penalty area with Shahriar Moghanloo’s ingenuity and his accurate pass for Vahid Amiri became the second goal of Golmohammadi’s students.

Vahid Amiri’s shot went out of the top of Masjed Soleyman Oil Gate in a situation where he did not have a good balance.

Siamak Nemati’s mistake on Masjed Soleyman oil player was accompanied by a second yellow card and dismissal of this player.

Ehsan Pahlavan lost the dangerous counter-attack of Persepolis in a one-on-one situation with the opponent’s goalkeeper.

Mohebbi’s rebellious shot from behind the Persepolis penalty area was accompanied by a good reaction from Hamed Lak. The oil attack continued unabated.