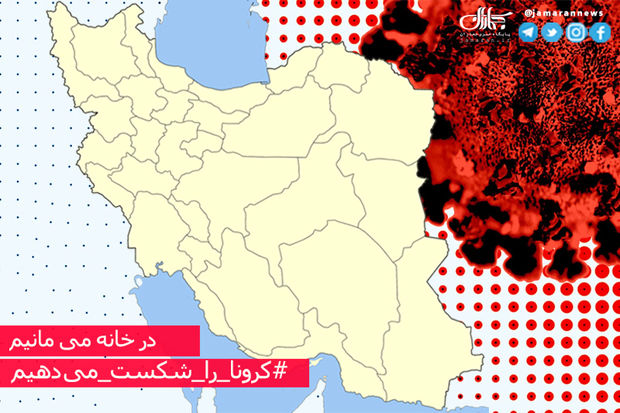 The spokesman of the Ministry of Health, Treatment and Medical Education, announcing the latest statistics of corona patients and casualties in the country, said: with the death of 97 compatriots with Covid 19 disease last night, the number of corona casualties in Iran has reached 61,427 .

Sima Sadat Lari added on Tuesday: in the last 24 hours until noon today (March 17, 2016), based on the definite criteria for diagnosing 8,380 new patients with Covid 19, 88 people were identified in the country and 889 people were hospitalized. With this account, the total number of Covid 19 patients in the country reached one million 763 thousand 313 people.

A spokesman for the Ministry of Health said: “Fortunately, 1,506,360 patients have been recovered or discharged from hospitals so far.” Also, 3,848 patients with Covid 19 are being cared for in the severe condition of this disease, and so far, 11,846,528 Covid 19 diagnostic tests have been performed in the country.

According to the Ministry of Health, the cities of Abadan, Ahvaz, Bandar Mahshahr, Dezful, Ramhormoz, Shousha, Shushtar, Karun in Khuzestan province and the cities of Gachsaran in Kohgiluyeh and Boyer-Ahmad provinces are in red corona.

The Ministry of Health announced: Gathering in indoor places, especially in hotel restaurants, reception halls, weddings and mourning ceremonies, congestion in Nowruz bazaars, intercity public transportation, especially buses and trains, can be a serious cause of disease transmission.

Also, in the yellow situation, only the job level of group four is closed. In the orange position, job levels 3 and 4 are closed, and in the red position, all jobs except the essentials are closed at level one.

Citizens can refer to the Mask application or the address https://app.mask.ir/map for information on the current status of cities.

A spokesman for the Ministry of Health has previously warned of the spread of the mutated virus in some provinces, saying that the coronavirus is more contagious, infecting children and young people more than the Wuhan virus. Therefore, the increasing incidence of coronary heart disease in younger groups indicates the need for intelligent coexistence with the virus, as the incidence of more young people also increases the risk of developing the disease in the elderly. We hope that all people will prevent the fourth outbreak of this disease in the country by observing the principles of hygiene and avoiding unnecessary trips and gatherings close to each other.

According to Larry, the level of compliance with health protocols in the country has reached its lowest level in the last four months. Decreasing the observance of health protocols, along with the increase of the mutated virus in the country, as well as the passing of the last days of the year and traveling, parties and eras on Nowruz, are all serious alarm bells for the fourth outbreak of the disease. We hope that all people will avoid any negligence and experience calm and low-risk days in the early days of the new year.

A spokesman for the Ministry of Health and Medical Education said: “Last week, compliance with health procedures decreased by about 10 to 15 percent, and it is worrying that if traffic increases and the corona rotates, the achievements will be achieved by following the procedures and implementing the plan.” Martyr Soleimani was obtained, he disappears.

The coronavirus, the causative agent of Covid 19 disease, has been observed in Wuhan, China since late 2019 and has recently spread worldwide; So that the World Health Organization in March (February 2020) confirmed the outbreak of a pandemic (global epidemic) of this disease.

According to official statistics, the corona virus has infected more than 120 million people worldwide so far, and about 2.6 million people have died of Covid disease.

The corona virus is transmitted to infected people through infected hands or sneezing, coughing, and even respiratory droplets through the mouth, nose, and eyes. Shortness of breath, fatigue and body aches, olfactory and taste disturbances, and digestive problems are some of the symptoms of Covid’s disease. More than 80% of those infected with the virus also develop a mild illness.

The corona virus mutation in the UK and Africa, which has increased its spread, morbidity and mortality, has raised new concerns around the world.

The president of Arak University of Medical Sciences and Health Services said: 96 new cases of coronary heart disease were identified in the last 24 hours based on the latest laboratory results in Markazi province.

Dr. Mohammad Jamalian added on Tuesday: The corona virus has killed three other people in this province in the last 24 hours.

He stated: with the registration of this number of deaths in the last 24 hours, the number of corona victims in Markazi province since the outbreak has reached 1,492 people.

The president of Arak University of Medical Sciences and Health Services said: “Thus, the number of cases of coronary heart disease since the outbreak of the virus has reached 38,223 people.”

Jamalian added: out of 96 new cases in the province, 12 people are hospitalized in the province who are under care and receive specialized medical services.

He said: “85 newly identified patients are being treated on an outpatient basis and have been quarantined at home until the final test result and treatment are negative.”

The outbreak of coronavirus started in March of last year, and Markazi province was one of the first provinces after Qom to be infected.

The director of the Parks and Green Space Organization of Qom Municipality said: Travel to Qom is not prohibited during Nowruz and mid-Shaban, but travelers are not allowed to enter the parks when it comes to setting up tents and camps.

According to a report from Qom Municipality on Tuesday, Payam Javadian added at the meeting of Qom Municipality’s Pilgrim Facilities and Travel Services Headquarters: “In previous years, despite schools, hotels and guesthouses in early April and the beginning of the year, there were many problems. We have ahead.

He stated that in urban settlements, due to hygienic conditions and observance of hygienic points, it is not possible to live in parks and gardens at all, he said: tents are not allowed in the park.

Emphasizing that any gathering and setting up of tents in parks is prohibited, he clarified: in parks and parks, it is possible to use only for the use of citizens up to night restrictions.

According to the National Anti-Corona Headquarters, the outbreak of the coronavirus in Qom province had changed from red to orange on January 6, from orange to yellow on January 6, and from yellow to “blue” on January 7, which will return to March 25. “Yellow changed color.”

The president of Qom University of Medical Sciences said: in the 24 hours leading up to the 25th of Esfand, 1999, two positive corona patients lost their lives in this province.

Mohammad Reza Ghadir, referring to the latest situation of patients with Covid 19 in Qom, added: During this period, 30 patients with symptoms of coronary heart disease were admitted to medical centers in Qom and 20 people were hospitalized.

He stated: During this period, 17 Crohn’s patients were discharged from Qom hospitals after recovering.

He said: “Currently, 134 positive coronary patients are hospitalized in Qom, 12 of whom are in critical condition.”

Kermanshah spent another day without a corona death

The head of the information committee of the corona management headquarters of Kermanshah University of Medical Sciences, announcing that we did not have any cases of death due to corona in the province last night, said: the number of victims is the same as 494 people yesterday.

“Mehdi Mohammadi” added on Tuesday: “Last night, 51 new patients with symptoms of Covid 19 were admitted to medical centers in the province and 51 people were discharged after recovery.”

The head of the information committee of the Corona management headquarters of Kermanshah University of Medical Sciences added: Last night, 16 positive patients were admitted and 78 positive outpatients were identified in the province.

He stated: Currently, 143 Covid 19 patients are hospitalized in Kermanshah province.

The head of the information committee of the corona management headquarters of Kermanshah University of Medical Sciences also announced the new colors of the cities of the province and said: “According to this, eight cities are yellow and 6 other cities are in blue.”

According to the Corona headquarters, in the case of yellow or moderate danger, only job level four will be closed.

The number of coronary heart disease patients in Lorestan reached 70,521

Lorestan University of Medical Sciences Vice Chancellor for Health said: the number of coronary heart disease patients in this province has reached 70,521.

Maryam Koushki stated on Tuesday: A total of 241,179 samples of corona mucosal tests have been sent to the laboratories of the province, of which 169,166 were negative.

He said: so far, 1,361 people in Lorestan have lost 19 lives due to Covid disease, and currently 195 patients with suspected coronary heart disease are hospitalized in the province’s hospitals.

The head of the Covid 19 Disease Control Headquarters of Lorestan University of Medical Sciences also emphasized on observing health protocols, avoiding gatherings, reducing unnecessary traffic, and proper ventilation of the air at home and at work.

Koushki continued: The increase in cases and hospitalizations in the province, the change in the color of the cities of Romeshkan and Chegni from blue to yellow and Poldakhtar and Doroud from yellow to orange has sounded the serious alarm of the fourth corona in the province.

He added: “Citizens should follow the health protocols and if they have any symptoms of a cold, they should go to 16 and 24 hour centers for coronary examination.”

The number of patients with British Crohn’s disease in Ardabil province increased to seven after another suspect tested positive.

The president of Ardabil University of Medical Sciences and Health Services said on Tuesday: “According to the latest results determined by the Corona Diagnosis Laboratory, the English corona test of a 28-year-old man in Ardabil, who is currently hospitalized at Imam Khomeini Hospital, was positive.”

Dr. Shahram Habibzadeh added: This young man from Ardabil entered the country by air from Iraq and it seems that he was also infected in Iraq.

Referring to the hospitalization of 6 patients with British corona in Ardabil and one in Khalkhal, he said: “A number of people around these patients have also been intercepted and a corona test has been performed on them.”

The President of Ardabil University of Medical Sciences and Health Services asked all residents of the province to report the matter to the 4030 telephone system or the telephone number of the Centers for Disease Management of the cities if they have a passenger from Khuzestan province or provinces involved with the British Crona and Iraq. Or go to the nearest health center, center or health center where you live.

He also called on citizens to take seriously the screening, examination and testing of people suspected of having a corona, especially the British corona.

Dr. Habibzadeh added: “If people are observed and confirmed to have English Crohn’s disease, the person should be treated or isolated immediately and those around him should be controlled to prevent the transmission of the virus in the family, people around and the community.”

Strict measures against coronary heart disease in Ardabil province by the people and health care providers have been increased since four days ago, at the same time as the confirmation of the identification of cases of a new type of coronary artery called English coronary artery.