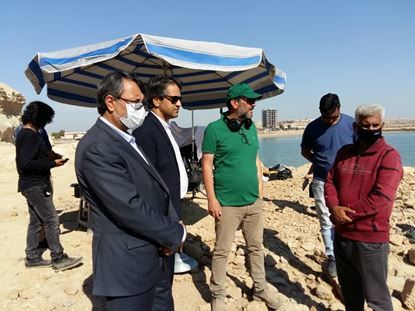 The Deputy Minister of Culture, Social Affairs and Tourism of the Qeshm Free Zone Organization visited the production stages of the film Good, Bad, Julf 3, the last scenes of which are being filmed on Qeshm Island, and met with its director and producer.

According to the economic observation report and quoted by “Faraznews”, Morteza Sheikhzadeh in this visit, who was accompanied by the Director General of Islamic Culture and Guidance of Qeshm Free Zone, while being behind the scenes of filming a sequence of this film with director Mohsen Chegini and The producer, actors and executives of this film talked and issued instructions regarding the cooperation and assistance of the relevant officials in the Qeshm Free Zone Organization.

According to this report, Morteza Sheikhzadeh, Deputy Minister of Culture, Social Affairs and Tourism of Qeshm Free Zone Organization, on the sidelines of this visit, geographical location, climatic conditions, especially geosites and unique natural and geological places of Qeshm Island attracted many domestic short and feature filmmakers. And a foreigner called to this island and said: in addition to the rich culture of the natives of Qeshm and their special rituals and traditions along with the tourist attractions of Qeshm, has made this island very attractive for our country’s culture and art intellectuals, including writers and filmmakers.

Referring to the emphasis of Hamid Reza Zomeni, Chairman and CEO of Qeshm Free Zone Organization on the need to support all those who work to strengthen and introduce the rich indigenous culture of Qeshm, the Qeshm Free Zone Organization supports filmmakers who make Qeshm the subject of their films. Or use the island’s tourist attractions as their movie locations, he stressed. It is worth mentioning that in the movie Good, Bad, Julf 3 with comedy theme directed and produced by Mohsen Chegini and written by Peyman Ghasemkhani, actors such as Gohar Kheirandish, Sam Derakhshani, Pejman Jamshidi, Maral Farjad, Anahita Dargahi, Farhad Ayesh and Hamed Komili they do. The filming of this film has started since the beginning of September of this year, and the shooting of its final sequences in Jirz-e Qeshm has been going on for two weeks now at Bahman Pier, Golden Beach and eco-tourism of Souza Qeshm’s friend’s house.