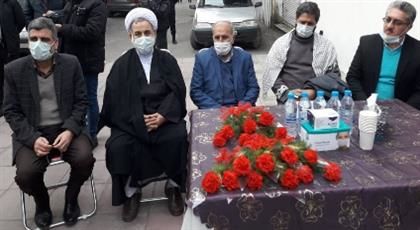 According to the Borna news agency from Gilan; Following the mobilization of Gilan Province donors for the release of prisoners, in another jihadist movement with the presence of Anzali city donors and the presence of judicial officials of this city and the presence of the director general of Gilan prisons, 18 unintentional crimes prisoners were released from Anzali prison and returned to their families. .

Mohammadi Asl, General Manager of Guilan Province Prisons, while appreciating the presence and active participation of the benefactors of Bandar Anzali, stated: With the help, sympathy and sympathy of the benefactors of Anzali, and the emphasis of Haj Mohammadi, the head of the country’s prisons organization, on identifying and activating jihadi groups In the country’s prisons, once again, with the help of God Almighty and the efforts of jihadi benefactors in Bandar Anzali, we returned 18 prisoners to the warm embrace of their families with 150 million Tomans, of which 60 million were provided by benefactors and 90 million by satisfaction with suspicions.

Mohammadi Asl, stating that this jihadist movement is being carried out in all prisons of the province, added: “All the efforts of Gilan prisons are to implement organizational priorities with serious determination and to achieve long-term and short-term goals by holding specialized meetings and consensus.” We try to return the prisoners who are on loan to us and who are serving their sentences to the warm embrace of the family with very valuable interactions of the judicial authorities by creating technical and specialized solutions.

Ahmadinejad, the head of Bandar Anzali prison, thanked the benefactors of the Anzali jihadi group for releasing the prisoners and said: “This process of releasing the prisoners will continue in the coming months, and with the valuable interactions of judicial authorities in reducing the criminal population, we have grown significantly.”