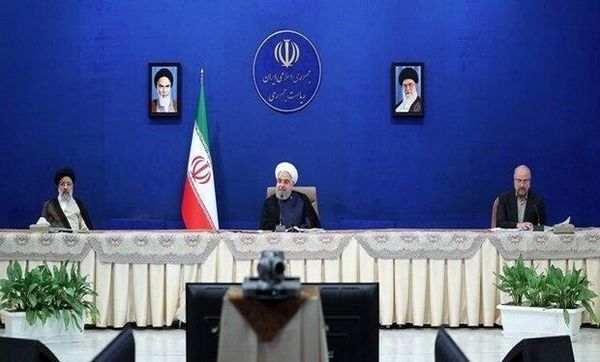 On Friday, it was reported that Qalibaf had written a letter to Rouhani calling for a 1400 budget reform; In a conversation with Sharq, the government spokesman said he was unaware of the letter. The main problem of the parliament with the budget bill is the amount of oil sales, which the government has estimated at 2.3 million barrels per day; But many are optimistic, and the Parliamentary Research Center poured clean water on the government and urged lawmakers to reject the budget altogether. Meanwhile, Hassan Rouhani started writing and asked the Supreme Leader to determine the amount of withdrawals from the National Development Fund, and his response changed the budget.

Yesterday, Hassan Rouhani attended a meeting of the government’s economic coordination headquarters and again defended his latest budget; However, Qalibaf also spoke firmly in the court of the parliament and said that what is not in the interest of the people, we will knock on the wall. “When we entered parliament, we promised the nation that we would try to get the government to work on various issues, and that is the duty of parliament,” he said last Wednesday.

Yesterday, the President spoke about the complexity and specialization of preparing budget bills and said: “This year, this process in the government, as in previous years, has been carried out with more sensitivity and accuracy due to the economic war and the government’s will to reform the budget structure. “It is based on livelihood support and investment development.”

* The budget is not a place for political controversy

Of course, he also considered the disagreement in budgeting to be natural and said that we should not allow such a complex, specialized, sensitive and vital issue to be the subject of political disputes, and the government tries to consider budget issues in meetings related to this issue. To achieve the requirements and requirements of the country with the necessary consensus.

Rouhani cited the budget of the last three years, when the United States withdrew from Borjam and the economic pressure on the country increased, saying: “In the last three years, he has adjusted the country’s budget bills according to the conditions of the economic war. The budget of 1400 has considered the leading realities and paying attention to the revenues and expenditures of the country have been the two main axes of development and infrastructure of the country and supporting the low-income groups has been the main approach of the budget. “The government is trying to manage expenditures in line with the policies of the resistance economy, in addition to providing opportunities for the country’s revenue growth.”

In a speech before his order, the Speaker of the Majlis emphasized the Supreme Leader’s emphasis on the cooperation of forces with each other and the preservation of national unity for the benefit of the people, calling it a beacon for the parliament. Mohammad Baqer Qalibaf said: “We consider solving the people’s living problems as a priority and we believe that no burden can be lifted from the shoulders of the people, except with coordination and unity.”

He also spoke about the correct laying, saying: “There should be a common principle among all officials, and that is in the interest of the people. We will nail to the wall what is not in the interest of the people and which harms their livelihood and social status, and what is in their interest, spoken by everyone and written with everyone’s pen, we will look at it and we will try to guide and guide it. “It is right and in coordination and cooperation with the government, to lead the country towards solving the problems of the people.”

Qalibaf again mentioned the people’s livelihood support plan and said, “The people’s livelihood support plan is a good example that was achieved with the cooperation and coordination of the esteemed government.” We promised the people that we would not let their table become smaller. We tried to be less ashamed of fathers who were ashamed of their children. “You can be sure that we will not leave people alone in the midst of economic problems.” This is the plan that the government and the parliament disagreed on.

A month ago, Rouhani had said that the government was going to allocate 100,000 tomans per month for nearly 30 million people by the end of the year, and had provided a 1 million toman loan for 10 million households. At the same time, the parliament had a plan on its agenda to provide basic goods from the government. Qalibaf had said that the parliament had started work; But the president has called the plan by giving new subsidies. Of course, he said that it does not matter in whose name the plan is to be carried out, it is important that it be implemented as soon as possible. Eventually, the president withdrew from promulgating the “law requiring the government to pay subsidies for basic goods,” and the speaker replaced him with the law.

Qalibaf also said yesterday about the 1400 budget: “In the eyes of the parliament, the budget is the most influential governing document that will directly determine the path of progress or backwardness of countries. The most accurate and expert estimates must be included in the budget in order for the country’s roadmap to take a path in the interests of the people. “We hope that, given the coordination that has taken place, the esteemed government and the Program and Budget Organization will work together to amend the bill.”

Budget reform is as necessary as dinner

Qalibaf continued to emphasize budget reform, saying that reforming the budget structure, even in its minimal form, is as necessary for our policymakers as dinner, and that we will make the budget figures real in the major parliamentary reforms.

“In this way, the people will get the most income when the parliament and the government make the expert examination a priority and work in harmony with each other for the benefit of the people and the country,” he said. “Insha’Allah, with the final approval of the 1400 budget in a realistic and expert manner, the parliament will fulfill its duty to pave the way for the government to benefit the people and the country.” It seems that until the full approval of the budget, we see every day the opinions of the heads of the two branches about the pros and cons of the last budget of Rouhani’s government.