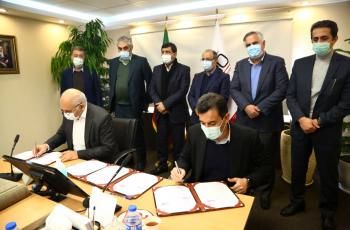 According to Shaman News, quoting the public relations of Parsian Bank; Dr. Kourosh Parvizian, CEO of Parsian Bank, said at the signing ceremony that Parsian Bank’s policy has always been to achieve a leap in production, strengthen the resistance economy, support productive activities and sustainable employment. Less progress is one of the priorities of Parsian Bank, and this bank has always considered the development of border and less privileged areas, including Sangan, and investment in this project will be done in the same direction.

Engineer Vajihollah Jafari, Chairman of Imidro’s Executive Board, said at the ceremony, which was attended by shareholders, employers and contractors of the project: And revenue generation in Sangan region.

He continued by stating that this project provides the ground for accelerating mining activities and the participation of the private sector: “The implementation of this project is one of the methods that will help guide the society’s liquidity towards productive and productive activities.”

Masoud Samieinejad, CEO of Parsian Investment Company, also stated: With the implementation of this project, the second factory of Opal Parsian Iron Ore Concentrate with a production capacity of 2.4 million tons will be built. He announced the investment amount of the project as equal to 145 million Euros and said: about 80% of the design of the second factory is similar to the first Opal Parsian factory in Sangan. According to Samieinejad, due to the readiness of the conditions and preparations, part of the project has been done and it is expected to be launched earlier than scheduled. According to the contract, the above plan will be built in 29 months.