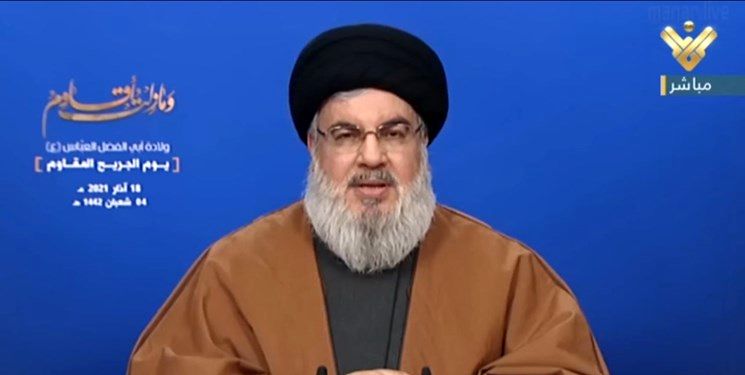 Hezbollah’s secretary general referred to recent Yemeni revelations about links between terrorist groups such as al-Qaeda and the US intelligence service, saying: “The reality of the existence of these terrorist groups and who created them and supported them is being revealed day by day. ».

“We are facing terrorist groups that are being created, run, supported and armed by US intelligence to destroy the national armies of countries,” he added. Sayyid Hassan Nasrallah said the US could be seen supporting the groups from Yemen to Iraq and Syria.

Lebanon and the internal situation in Lebanon

The Secretary General of Hezbollah in Lebanon called the situation in the country in need of special attention from political parties and currents, and said that it should not be forgotten that dealing with this situation should be done with wisdom, rationality and responsibility.

He said that the enemies of the resistance and its supporting countries started civil wars in Yemen, Syria and Iraq, and they wanted to start a civil war in Iran and Lebanon, and so far they have not succeeded in doing so in Lebanon.

Hezbollah does not need weapons to form a government

Sayyed Hassan Nasrallah said that some foreign and domestic parties are seeking to lead the country into a civil war, and for this they are looking for “fuel and firewood”. “Hezbollah does not intend to use weapons to form a government or to improve the economic or financial situation,” he continued.

Criticizing some views on the Lebanese crisis, he said: “The fact that some people assume the wrong reasons for the crisis means that we are looking for the wrong treatments and there are those who are looking for a solution and trying to find a solution to the existing crisis. they do not”.

Sayed Hassan said that the crisis that the Lebanese are facing has several reasons, and if they eliminate only one cause and put aside the other reasons, they will not reach Moore’s conclusion.