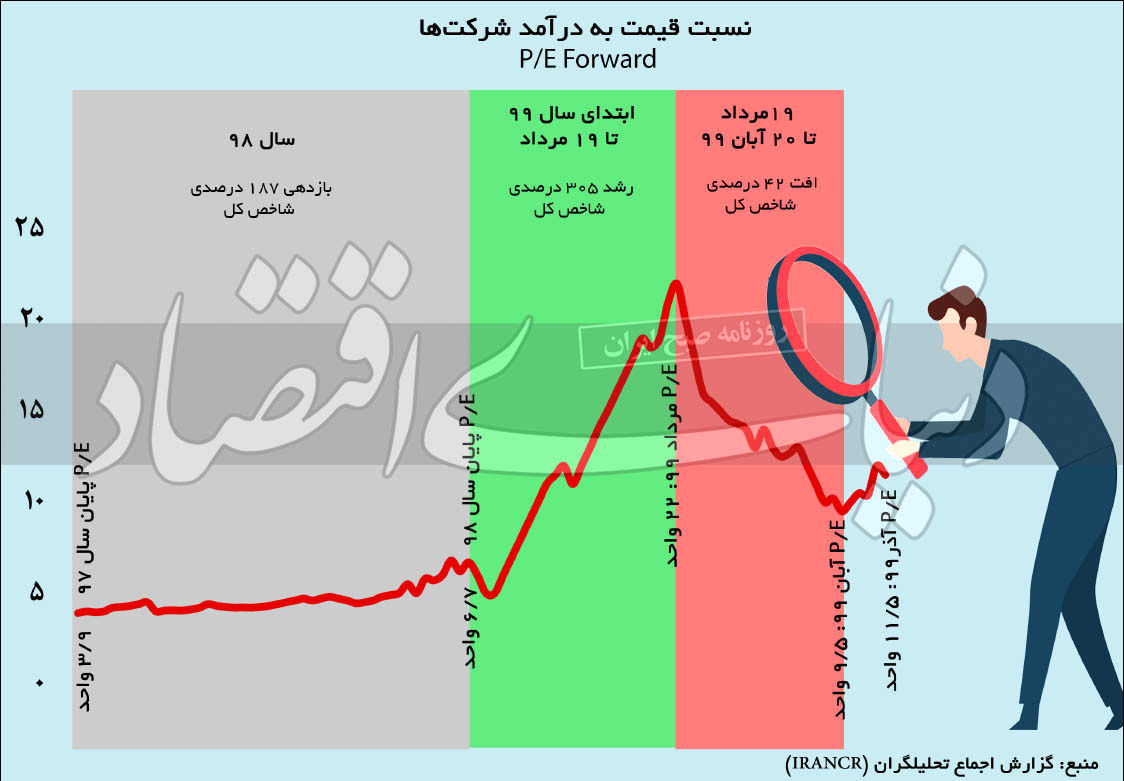 The capital market has gone through three seasons since 1999, showing the rise and fall of prices in the face of risk, two general views of the market. On the one hand, a group of sellers are adapting to any foresight for any kind of economic opening and reducing the risks of the economy. This market is conceived. Conspiracy theories are known to emerge from complexity. Sometimes the human environment tends to be so complex that the stakeholders of an event or topic have no choice but to rely on explanations that simplify the nature of an issue rather than a precise one, in the face of high volumes of seemingly contradictory information and topics. In this case, simplification not only does not serve the problem and better understand the variables involved, but it is itself a stone tied to the lame leg of truth, which can sometimes create general misunderstandings to abnormally large numbers of people away from the correct understanding of the event or existing possibilities. Slowly The problem starts with the fact that the majority of people involved with an ambiguity often believe that the answer to a simple question necessarily contains a simple explanation, which, if achieved, will greatly alleviate the problems formed around the discussion; It is a fact that has already affected many different aspects of human life. The problem is that the human mind is basically not very interested in hard answers. Man hates complexity, and it seems that this is the reason why he turns away from it when he needs more information.

What is the reason for this is beyond the scope of this article, but what is certain is that the bias mentioned and the issues that have developed around it over the past few years have greatly affected what is going on in the capital market. At present, many micro-capital market participants, despite the fact that they have witnessed at least two major fluctuations in this market since the beginning of this year, still believe that the stock market is a place where it can be easily and for a long time without trying. He worked hard to earn a living and earned money easily. This crude assumption, which has manifested itself in the disproportionate increase in the number of channels active in virtual networks, has not only strengthened the conspiracy theory among the general capital market segment; Rather, it erroneously creates the impression that the stock market and the ups and downs of prices in it are more the result of the behavior of legal entities and behind-the-scenes handling of stocks than of the intersection of all decisions affecting the price of an asset. Demand or supply in the market. The problem starts with the fact that this issue, although a precedent in the stock market, is not very accurate. The fact that there are natural or legal persons in the market who buy and sell stocks only at their own discretion is something that exists all over the world. However, what has been able to affect this issue is not the behind-the-scenes groups, but several factors, including the study of fundamental factors.

The vicious cycle of inflation

Perhaps the biggest factor that can play a role in this notion of conspiracy is the less visible aspect of investing in the stock market, ie its risk. The capital market, meanwhile, is known as a risky market in other parts of the world, especially in developed economies. In Iran, the rise and fall of inflation in the public mind over the past decades has made it a volatile and seemingly attractive market, which in general is more than Representing the real sector of the economy, it has become a representation of general expectations of inflation and risk. “World Economy” surveys show that in all periods of rising dollar prices in recent decades, which show the overall index of rapid growth, the general popularity of the stock market coincided with the period of devaluation of the rial, which is why During all these periods, the price-to-earnings-per-share ratio, or P / E, is slightly higher than normal, with inflation expectations hovering around the long-term average.

The problem, however, begins where the sudden rise in inflation and the consequent escalation of inflationary expectations pave the way for price increases based on factors such as the need to revaluate assets, increase replacement value, and most importantly, increase the dollar value of corporate sales. As a result, the value of trades gradually increases and public attention to the stock market increases, to the point that in each period the subconscious public mind is intimidated by the news of this growth and joins the stock market activists to avoid the profit train.

This entry, however, is not as low-risk as it first seems. Newcomers to the capital market in each period, as they come to the stock market due to the growth of inflation expectations and do not have enough financial knowledge before entering, will ultimately have no choice but to invest by analyzing others and luck. This causes the accompaniment of prices in the market, which was initially due to reasonable fundamental and analytical factors, to gradually create a massive situation in which the flood of liquidity, like an abandoned herd, goes wherever it wants and alone. What he thinks is rising prices. The result of this situation will be nothing but ignoring the risk and falling prices suddenly. This is precisely why, over the past 30 years or so, we have witnessed the widespread prevalence of stock market investment among different sections of the population; Growth that comes with inflation and under the banner of devaluation of the national currency gradually creates a wealth bubble and then bursts, which is accompanied by a sharp collapse.

Play with the tail of risk

But these ups and downs of inflation, as mentioned, often manifest themselves by changing stock market ratios. Uncertainty about the future causes prices, as the most important economic measure of all available expectations and analyzes, to rise in such a way that the ratio of price to futures income, which we call P / E FORWARD, differs sharply from the usual rate of return. No risk. This rate, which is considered the same as the bank interest rate in the Iranian economy, is generally a measure in all economies of the world, according to which it is possible to receive investment in an asset, taking into account all the peripheral risks. Since any investment, because of the risk-taking and patience it requires, should logically have a higher return on risk-free returns, it is natural that investing anywhere outside of government bonds or bank deposits would be more profitable. But what determines this excess?

What has become obvious in the financial literature today is the direct relationship between risk and return, meaning that the rational investor, in the face of any investment situation, uses his capital at a rate of return that is commensurate with the risk; In other words, the higher the risk, the higher the return. In the Iranian economy, what plays a major role in determining the expected return on an asset is systematic risks. Among these risks, what has increased during the last two years and in all periods of sharp devaluation of the rial is the risk of inflation and currency risk, which has directly affected the financial ratios.

As noted in previous reports, “World Economy” surveys indicate significant growth in price ratios such as futuristic P / E, P / S (selling price) and P / E book value in all recent uptrends. . However, each of these ratios shows a different factor, and the coincidence of their increase with the high inflation of the years in question indicates that inflation expectations have been able to deviate from all the analytical procedures of the years of stability and reach conditions that are specific to the unusual situation. Analysts’ consensus clearly shows that the price-to-earnings ratio in the first three quarters of 1998 never exceeded 4.7 points. However, since the beginning of the winter of 1998, this ratio has exceeded the range of 5 units with an increasing slope, and by the end of this year, it has reached the range of 6.7 units. At the beginning of this year, thanks to the recession in business and housing, many people entered an unusual growth phase due to the sudden decrease in bank interest rates, and finally reached 22 units for the entire capital market by mid-summer. This accelerated increase in the mentioned ratio was recorded by reaching the selling-price coefficients and the price at book average value of the market average in the range of 9.65 and 14.13, while the increase of these ratios was not due to increased productivity in the economy but due to inflation expectations. It came from the risk of devaluation of the national currency. This has led to a hyperreaction to the stock market in the coming months in the future growth of prices to record an extreme change in all these ratios; Ratios that have been historically unprecedented and with the first waterfall offering by one of the brokerage firms selling justice stocks led to a drop of almost 50% in the value of the Tehran Stock Exchange.

In conflict two ways of thinking

Since then, although a significant portion of existing capital has flowed into the foreign exchange market and raised the price of the dollar to the range of 32,000 Tomans, despite this reduction in prices in the capital market has not reached a level where the average P / E of the market futures to the average of days Reach before the middle of 1998.

While the heavy sell-off in the capital market before the US presidential election was a resounding reaction to lost prices and a continuation of the sales excitement, the rise in hopes of a possible economic opening stemmed from the post-Trump US return to BRJAM along with record-breaking commodities in the markets. The world eased the negative atmosphere in the stock market and OTC and led to the prosperity of the two in December. However, during this period, this ratio is still high compared to the historical background. It seems that what has caused the supply and demand tug-of-war in recent days to greatly increase market fluctuations is the intersection of two different perspectives on the future of the stock market. On the other hand, some believe that a political opening in Iran’s relationship with the West could reduce political risks; An issue that easily reduces the existing risk and leaves no choice but to adjust future analyzes with a further drop in the price of currency and thus a reduction in the price-to-income ratio. It is now close to imposing a rapid reduction of risk on the market. These groups believe that for these reasons, the growth of world prices in the medium term is the most important factor facing the market and can face the capital market with more prosperous days.