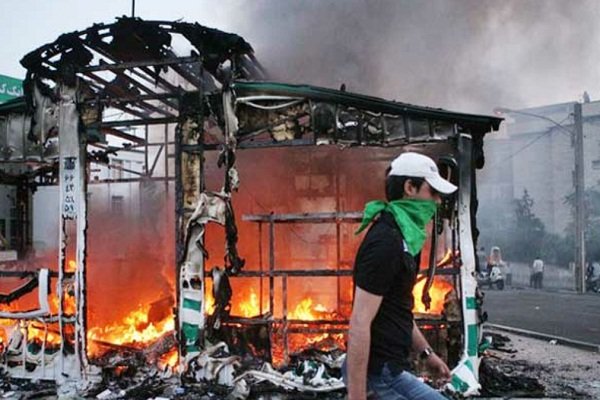 Mehr News Agency, Provinces Group – Yahya Desert: In January 1988, the sedition that began in the June elections of this year reached its main path, and the seditionists who until yesterday saw election fraud as an excuse to riot in Islamic Iran, targeting the regime and finally Sayyid al-Shuhada (AS). They removed the mask from the intentions of the riots.

While millions of Iranians in love with Hazrat Aba Abdullah were mourning on the Ashura of Husseini 88, the infantry of the sedition movement came to the square before the noon of Ashura by holding illegal rallies in some streets of Tehran that bore no resemblance to the mourning of Aba Abdullah Al-Hussein (AS). They violated the sanctity of mourning Imam Hussein (AS).

The seditionists who started whistling, clapping, cheering and chanting many insults آيز They demonstrated the depth of their disbelief in Islamic values ​​in action هتاکانه They attacked the mourning tent of Hazrat Aba Abdullah (AS) and stoned the mourners who were performing the noon prayer of Ashura.

After the publication of pictures and videos of sanctity Breaking On the day of Ashura in Tehran, hundreds of men and women from Kermanshah, who, according to the Supreme Leader of Iran, have been called the big chest, could not control their revolutionary anger, and on the eighth day

December coincides with the third day of Imam Hussein (ع) They took to the streets and demanded a decisive confrontation with the seditionists and rioters on the day of Ashura.

The revolutionary people of Kermanshah, who spontaneously started a protest march from Ghadir Square to the Kermanshah Grand Mosque.ع) And they declared Takaya and Hosseiniyah as their red line.

Hojjatoleslam Yousef Ahmadi, Director General of Islamic Propaganda in Kermanshah Province, in an interview with Mehr, referring to the history of the beginning of the street riots in 1988, said: When a mistake is repeated in a row, it shows that it is no longer a mistake but a line.

He added: with the events of Ashura, the scene of cheering and looting of tents by Beni امیه Embodied for the people; But the enemy had made a mistake in its calculations in recognizing the red line of the people of Islamic Iran, and with disrespect to the mourning of Hazrat Seyyed al-Shuhada, the 88th sedition version was wrapped up forever.

Director General of Islamic Propaganda of Kermanshah Province, referring to the repeated insults to the device Mourning Imam Hussein (ع) This time in Kermanshah, he said: We in Kermanshah have Takayas and Hosseiniyahs where people have mourned for hundreds of years and the Hosseini people of Kermanshah, in the case of insulting the mourning in the sedition of 1988 and this recent insult to Takayas and Hosseiniyahs, never proved for Imam Hussein They will not leave less.

He further referred to the timely action of the revolutionary people of Kermanshah in holding a rally to protest the continuing insult to the sanctities by the seditionists of 1988, and added: “Quick understanding, timely understanding, when acting and responding to needs” are characteristic. The Supreme Leader of the Revolution used it during the provincial trip of 1990 for the prominent martyrs of Kermanshah (Martyr Seyyed Mohammad Saeed Jafari and his companions) and the people of Kermanshah responded to the needs of those days with awareness and timely action.

The Director General of Islamic Propaganda of Kermanshah Province considered the end of the sedition of 1988 as an insightful march on January 29, and added: The million people of Iran marched on January 30, 1988, especially in Tehran, to wrap up the seditionists’ version forever. ننگی It will remain on the foreheads of the seditionists forever.