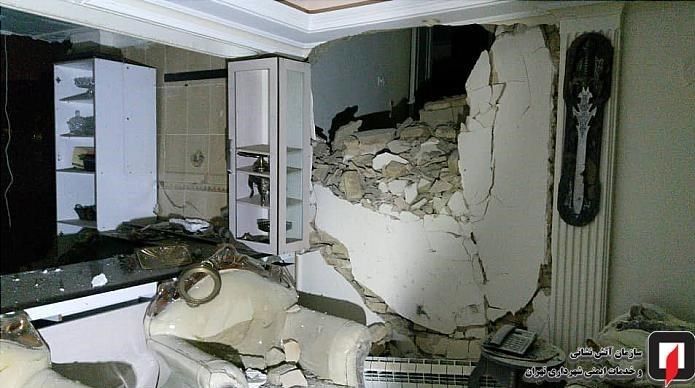 At one o’clock in the morning today (December 1), the neighbors of a residential building on Abuzar Boulevard, Fifth Bridge, Vahdat Street, Davood Abadi Alley, heard the terrible sound of a rushing explosion and came out of their buildings. They informed the 125 system.

Moments later, the Tehran Fire Brigade Headquarters rang the bells of stations 24 and 113 and sent the operation forces and the rescue team to the scene.

Mohammad Reza Khezripoor; The officer in charge of the eight operations area of ​​the Tehran Fire Department stated about the details of this news: Due to an unknown incident that is being investigated by a district expert, a severe explosion on the second floor of a five-story two-unit building with an area of ​​about 70 square meters completely destroyed two units. The third floor and the collapse of the walls on the south and north sides of the building.

He continued: “The wave resulting from this explosion was so great that the windows of several buildings far from the accident site were broken and the debris from the collapse of the northern side of the building caused severe damage to two cars and a van parked inside the alley.”

Khezripoor added: “Due to the damage to the upper floors and the imprisonment of its residents due to the closing of doors and the collapse of the walls, firefighters entered the building immediately after the gas and electricity were cut off by equipping themselves with personal protective equipment and then They were divided into several groups and evicted the residents of the units from the building.

The officer in charge of the eight operations area of ​​the Tehran Fire Department stated: In the floor where the explosion took place, a 30-year-old woman suffered severe injuries and burns, which were taken out of the building by the operation forces and immediately handed over to emergency services.

He noted: A 40-year-old man also suffered minor injuries due to the destruction of the wall, which was delivered to the emergency services for initial examinations.

According to Khezripoor, the blast caused the north facade of the building to be in a semi-suspended state and in a state of rubble. Firefighters, with the help of law enforcement agents, made the necessary security measures and prevented people from moving.

According to news site 125; After ensuring the complete evacuation of the building and not being trapped inside the residential units, the operation forces ended by securing the accident site and handing it over to the municipal agents and the mayor of Tehran at night to collapse the suspended facade of the building, preventing possible accidents and providing safety warnings. They gave.