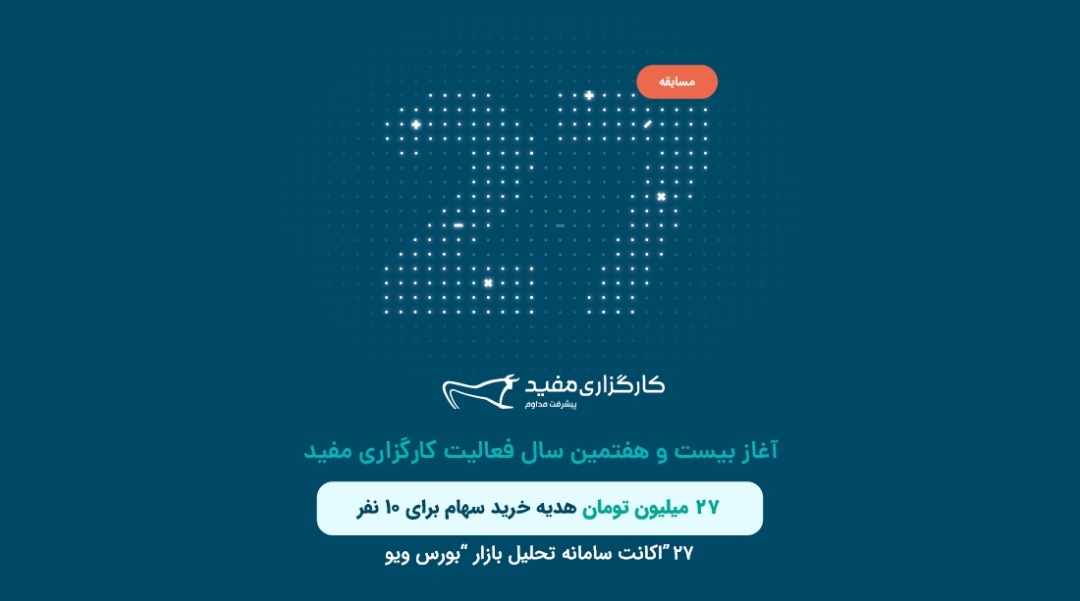 Useful brokerage At the beginning of the 27th year of its activity, it announced a 24-hour response time for users, and also considered a contest with 10 prizes of 27 million Tomans for its users on social networks.

Mofid Brokerage Contact and Support Center On the anniversary of its establishment, Mofid Brokerage increased its activities to 24 hours a day, 7 days a week, even on holidays. For this reason, a contest with valuable prizes has been held for the users of this collection on social networks.

Mofid started working in 1994 and during the last 26 years, with the slogan of continuous progress, has been trying to provide a favorable investment experience for its users with distinctive services. The brokerage is now in its 27th year, with the mission of redoubled its efforts to satisfy its valued users. Beneficial activities over the past 26 years have been constantly updated to continue to be recognized as a leading brokerage in the capital market.

Simultaneously with the beginning of the twenty-seventh year of useful activity, the activity of the call center of this brokerage became round-the-clock, and the response to the stock exchange users is done by experts 24 hours a day, 7 days a week. Based on this, the experts of the support center answer users’ calls to 02191008700 and 0218700 24 hours a day.

The call center has increased its response capacity to users in peak demand conditions by more than 10 times the number of respondents over the past year. This call center with more than 650 manpower is not only the largest call center in the capital market but also one of the 10 largest customer response centers in Iran.

Previously, the response time of Mofid Brokerage Call Center was from 7 am to 7 pm, which has been increased to 24 hours a day, 7 days a week, from December 14 with the formation of different teams.

According to statistical reports, in the peak days of contacting this support center, nearly 45,000 telephone calls were answered and 15,000 outgoing calls were received from customers. The average daily response time of telephone calls in this brokerage during this year has reached an average of about 35 thousand cases and calls made to customers have reached more than 10 thousand cases.

Another useful brokerage communication path with your users is the use of social media platforms such as Instagram. Attempts to respond to customers on social media are made by a team of ten. تیم This team responds to customer comments and directives one by one. In addition, a team of 15 people work in the email support department to respond to customers on a daily basis. Currently, the team responds to about 2,000 comments and direct messages on social networks and 3,000 emails daily.

A contest for followers of useful brokerage on social networks

On the occasion of entering the 27th year of its activity, Mofid Brokerage has organized a big competition for social network users, in which 10 users will be awarded a gift of 27 million Tomans to buy shares. In addition to the other 27 people, the account of the advanced market analysis system “Bourse View” will be awarded by lottery.

There are two simple steps to attending this contest, so that participants must follow a useful brokerage page on Instagram in the first step; In the second step, they should invite three of their friends to the “Beginning of the 27th year of useful brokerage activity” competition under the post of this contest in the comments section.

People will have a better chance if they share this contest on their personal page as a story with their friends and direct its image to the official page of a useful brokerage on Instagram at @mofidsecurities.