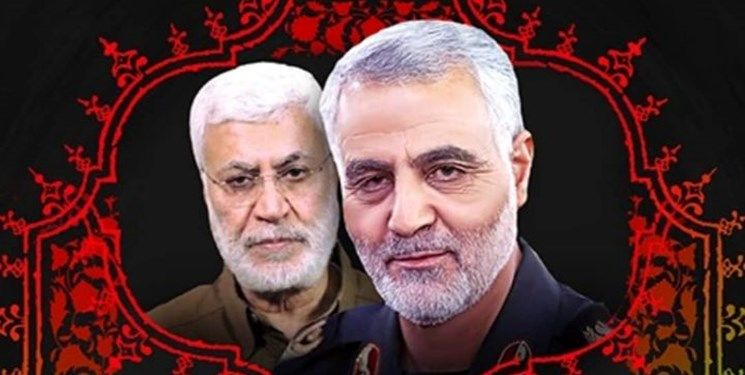 One week ago, different cities and regions of Iraq organized special programs to commemorate the anniversary of the assassination of the commanders of martyrs Haj Qassem Soleimani and Abu Mahdi Al-Mohandes in the form of gatherings, memorial ceremonies, photo and film exhibitions and specialized seminars to investigate the assassination and file a lawsuit in international courts. It has started against its perpetrators and designers.

Accordingly, an outdoor exhibition was held in the Iraqi capital, Baghdad, to honor the martyred commanders.

In this exhibition, pictures of the commanders of Martyr Soleimani and Abu Mahdi Al-Mohandes and the martyrs of Al-Hashd Al-Shabi are included.

In a part of this extensive exhibition, the operations of the martyred commanders and their comrades in the fight against the terrorist group ISIL are presented in the form of sand models.

Some of the booths in this exhibition are dedicated to the clothes, tools and equipment of the martyrs of the Al-Hashd Al-Shabi Organization, and in another booth, books with religious themes are presented.

Kirkuk province in northern Iraq also witnessed a commemoration ceremony held at the headquarters of the 16th Brigade of the Al-Hashd Al-Shabi Organization with the participation of Al-Hashd Al-Shabi commanders and security forces, political figures and sheikhs of Turkmen and Arab tribes and a large crowd.

The participants in the ceremony paid tribute to the souls of the martyred commanders and other martyrs of the fight against the terrorist group ISIL and honored their memory.

They also praised the martyrdom of the martyred commanders, emphasized their continuation and called for the perpetrators and masterminds of the assassination of these martyrs to be tried.

The city of Balad in Iraq’s Salah al-Din province also witnessed a conference called “Sustainability of Balad” with a large attendance of people, tribal sheikhs and political figures. Soleimani and al-Mohandes praised the commanders of Operation Victory over the ISIS terrorist group.

The speaker also referred to the heroism of Al-Hashd Al-Shabi and the people of Balad in the fight against the terrorist group ISIL, and stressed that he will continue the path of these martyrs.

They also stressed the need to end the occupation in their country.

The Iraqi Students and Youth Association of Maysan Province also held a commemoration ceremony in memory of the martyrs Soleimani and Abu Mahdi al-Mahdas.

The ceremony was attended by a large number of residents and prominent figures and sheikhs of the Maysan tribes.

They condemned the American crime of assassinating martyred commanders who played a major role in defeating terrorism and protecting Iraq and its sanctuaries.

Baghdad University of Technology also witnessed a large memorial service to mark the first anniversary of the martyrdom of Soleimani and Abu Mahdi al-Mohandes.

In addition to students, a number of political figures and commanders of the Iraqi Al-Hashd al-Shabi organization attended the event.

The ceremony was accompanied by the recitation of poems and hymns in praise of the martyred commanders and heroes in the fight against the ISIS terrorist group. The participants emphasized the great role of Haj Qassem Soleimani and Abu Mahdi Al-Mohandes, commanders of the victory operation in defending Iraq against terrorism. Were cherished.

Nomadic sheikhs and prominent figures of Diyala province also held a commemoration ceremony for the commanders of Martyr Soleimani and the engineer in the conference hall of Diyala University, where they praised their bravery and that of other martyrs and al-Hashd al-Shabi forces in the fight against the ISIL terrorist group.

They stressed that al-Hashd al-Shabi is a national power guarding the security and future of Iraq, and that they understand the scale of the conspiracies to tarnish the blood of the martyrs by using large propaganda machines worth millions of dollars, and that some countries do not want stability in Iraq.

Sheikh Ghazban Hussein, one of the sheikhs of Diyala province, said at the ceremony, which was attended by more than 100 nomadic figures: “The blood of the martyred commanders is the beginning of the end of the United States in the Middle East because the United States committed a crime against the blood that saved Iraq.” The scenario of its occupation by an extremist group was created and paid for by international intelligence agencies.

Lt. Gen. Haj Qassem Soleimani, commander of the IRGC’s Quds Force, and Abu Mahdi al-Mohandes, deputy director of the Iraqi Popular Mobilization Organization, and eight other comrades on the morning of Friday, January 4, 1998, on the way to Baghdad airport in a White House terrorist attack on the direct orders of US President Donald Trump. They were martyred by firing rockets from the drones of the army of this country.

As a result of this White House terrorist act, the Islamic Revolutionary Guard Corps fired several ballistic missiles at the US base of Ain al-Assad in Iraq’s Al-Anbar province on the morning of Wednesday, January 9th.

Following the rain rocket, the Pentagon announced in several stages and gradually that 110 American troops present at the Ain al-Assad base had suffered brain damage and were being treated.