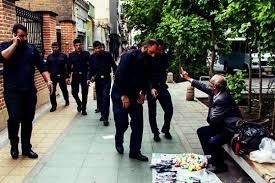 According to reports EconomyOnline Quoting Iran, when I look at it, it picks up a big towel and shows me its advertising label! “You see, it was all my own product, this is my brand, it has fallen to the ground, no one is looking at it, I have lived for it for 10 years, I was sad, I put coins on coins, but the costs bent my back, to the prices and the crown When he ate, I became miserable, the sexes remained on my hand. The workshop was closed, I fell in the corner of the house, my body was numb from nervous stress for a month. When I saw my wife and children, I picked up a big bag, hit the same street, shackled my reputation, I am afraid it is only my daughter. He is a teenager, he is ashamed … “

At the bottom of Haft Tir Square, he hears the words of “Reza” when he hears them. He says he is a taxi driver. Restrictions come, passengers are reduced, in the evenings from 5:30 pm, he raises his Pride trunk and starts selling scarves! Each of them is priced at 45,000 tomans, but in just a few hours not a single person has bought the same thing, people are standing, asking questions and leaving, the purchase invoice shows me that each of them is worth 37,000 tomans! He does not dare to spend more than 8,000 tomans on each sex, “People do not buy this way, one day, simplicity was rampant. You would drop the stuff, you would not pick it, it would run out, now the bird does not fill, not that it is not a customer, but no one buys at these prices. “Karim” is right, the cheapest prices I hear are the cheapest, a bowl of 15,000 tomans. The woman who sells, says that her customers are just around the corner. There is no definition of the yellow flakes on the sides. The man says: “Look at these. I have been taking them for a week. God willing, no one is a customer. I have left a bowl of 10 thousand tomans! In this one-time container, I drank 2,000 water, we who did not come from space. Before Corona, I was a construction worker, everyday! At least I was making a living, the property became more expensive, we lost our jobs. My employer fired half of us without pay. Earlier, they wrote our name, they paid 500,000 tomans twice, and now we are still struggling with the same subsidies and aids. From Robat Karim to here, he puts all the expenses on me. “The agents, however, have our air, they do not rent the situation they see anymore.” The simple ones say that now the number of newcomers has increased, except for the old ones at the bottom of the square, most of the outpatients are new. Corona has pushed many to shop, says a 41-year-old woman who once had a go-getter for herself. She lost her husband early in the coronation, had neither a steady job nor savings to support them. He is left with two children and a fish, a rent of one million and 500 thousand tomans, and 10 million tomans of medicine and treatment money left on his hand! The only way forward for him was to take two big black garbage bags and bring the scarves and hats that his mother weaves, here … each one is priced at 70,000 Tomans! “Each round costs me 20-30 thousand tomans. The profit may not be 10 thousand tomans, but I am satisfied with that. At least my bread and rice money! “Otherwise, who wants to beg and beg this customer and that buyer for hours in this bone-chilling cold!”

The woman puts her bags in front of a stall, the officers get stuck, and quickly hides inside one of the shops with her daughter. He says that he does not have the money to rent, he prefers to stand on his feet for 3 hours, but does not go into another pocket from the entrance, which often leaves nothing empty. Of course, he does not have the patience of the immoralities of the elders, that he wants to start a riot on a tile every day and then hear awkward words and ….

A person in front of a large store, which has been closed for some time, is sitting on khaki-colored carpets, one among the “blankets” and it is not clear where he is sitting. “As it gets dark, passers-by carelessly pass over the blankets … until someone finally makes a noise.” Hey Cory! Can’t you see! ”The man hid himself behind a pillar, put his jacket on his head and squatted in a corner, the simple people say do not approach him, he does not have proper nerves. He has been bankrupt for some time and is replacing himself with his student. Before Corona, he had a shop in Nawab that rented out-of-class goods here, but now he has to apologize to his student and take his place. “It is said that he was so humiliated that the hand of the times finally put itself in the place of the unfortunate student.” Above her in the corner of the sidewalk, a woman in a square carton, dressed in women’s clothes, her appearance is so justified that when she puts her glasses up and down on her face, I remember the serious school principals! Shaking his head, he does not even allow me to approach him … One of the simple ones who is paying attention to us points with his eyes to make me careless, then says so that the woman does not hear: “We have not heard her voice even once, as if she herself Has he participated, gone bankrupt, or do I know if he was a teacher, a principal, a moderator, someone! ”The man says,“ Looking for a good case, come and take me to Mehri, a gentle woman who has spread a corner on a few large tiles above the Basat Mosque. Mehri is older than many of its facilities. 32 years ago, Rahminja started his work from the side of the mosque, in his own words, at that time, no one broke a hand for a tile, it was him and a few people from his distance! But now the competition is so fierce that it does not force you to fight with God. “Mehri” but he does not care. Its credit is so high that it does not lease space and does not even bother anyone, now it has increased from one tile in those days to 10 tiles in Haft Tir Square. Her dying husband sews and sells her tail instead of “what can I do?” According to him, he has now given birth to 5 children, but one hand is paralyzed by the pressure of work, and the customers are in trouble. According to him, people are helpless and angry, they are constantly bargaining, on the other hand, the simple people are not happy, the customer who does not buy, their judgment goes up. The woman says that in those days, someone who had no choice came to our job, and now someone who stays from everywhere sits on the bench, but the people who do the bench now are very different from those times, they are literate, they are students and academics. “Some younger people do not have a steady job, this is how they spend their university.” “If her customers used to be 50 a day, now they are less than five,” she said.

“Look, this is Iranian sex. Tabriz was woven. I had a history of 20 years. But the costs were so high that I had to hand over the shop to Tower Two. I am expanding from Tower 4 here. Rent has left me no choice. My wife left me. My friends who used to give sex to Amani, when they saw me, they had my air for a few months, but now they also have problems, I will sell them a good day 100[هزار تومان] It stays. I have heard before that when there was no corona, they earned one million tomans a day. “Now, but not before 8 o’clock, we have to run after the bus and the subway …” This is Saeed’s profession. A man who went from business to Street peddler has arrived. His heart is full. From the loan of 15-20 million, he has only heard his reputation, he says who will be my guarantor anyway! Thank God they helped us with subsidies and a few million, I didn’t know what to do!