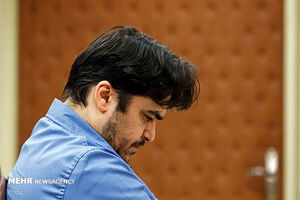 Ruhollah Zam’s father’s allegations about the meeting with his son were denied by an informed source.

This morning, after the execution of Ruhollah Zam, who was sentenced to death in a court of first instance for corruption on earth, and this sentence was reviewed and approved by the Supreme Court in a legal and normal process, a post was published on the Instagram page of Mohammad Ali Zam, the father Which contained false information, albeit with an emotional theme.

In this regard, an informed source in the judiciary told Mehr about the Instagram post published by Mohammad Ali Zam: “The allegations made by Mr. Zam regarding the details of the meeting with Ruhollah Zam do not correspond to the facts.”

The informed source clarified: The sentences used in Mr. Zam’s post are fictional storytelling, and of course, there has been a history of such comments by him before; Among other things, Mr. Zam used to communicate with Ruhollah Zam in various ways at the time when he claimed to have no connection with his son, so much so that even in the video of his relationship with his son, he is worried about the number of members of his channel, and It is noteworthy that at the same time he published a post in cyberspace and acquitted his son and the mentioned counter-revolutionary and anti-security measures; Therefore, such false statements by Mohammad Ali Zam are unprecedented before, so the claim made in this particular Instagram post is also untrue and untrue.

He also considered the statement that the judiciary sought to exchange Ruhollah Zam as a lie and said: “This issue is similar to the large volume of lies of Amad News channel.”

The informed official noted: Another important point is that the cases raised by Ruhollah Zam in the video broadcast by him, about which a story was told in his father’s Instagram post, did not contain new and unspoken information about the mentioned case, and all those cases, including Orientation to the Iranian nation’s boycotters and the announcement of Shahid Soleimani’s traffic areas in Syria, links to hostile foreign governments and Western intelligence services, and’s earlier by Ruhollah Zam during court hearings and in the presence of his lawyer (whose video has also been published in the media), as well as It has been mentioned repeatedly in other conversations with him over the past months.

He added: “Zam’s remarks were made even when he was abroad, and a video of him was broadcast, and there was no need for a special stage to tell the truth.”