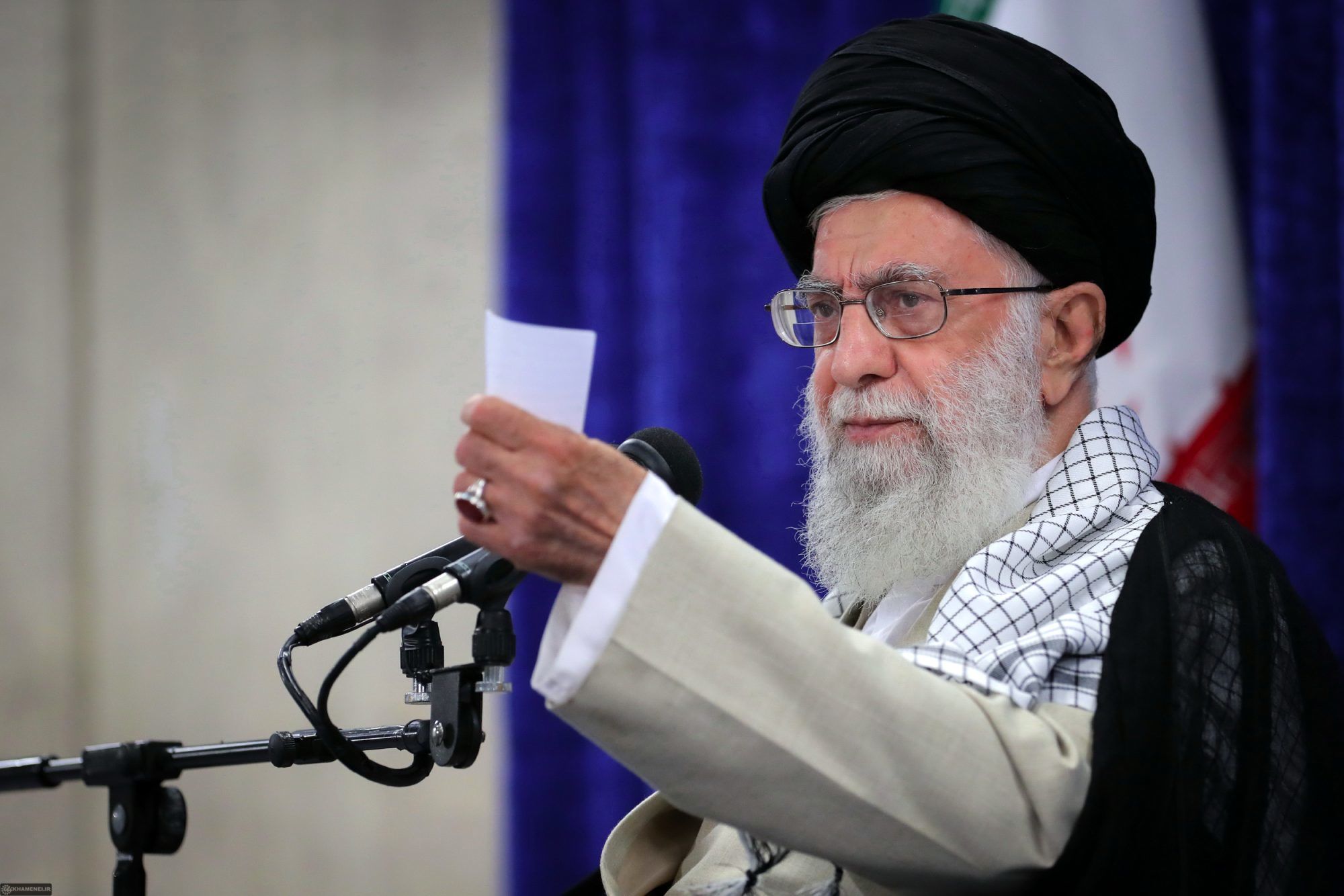 According to Shaman News: Ayatollah Khamenei, Supreme Leader of the Islamic Revolution, this morning (Wednesday) during a meeting with members of the staff commemorating the anniversary of General Martyr Sardar Soleimani and his family, called Martyr Soleimani the hero of the Iranian nation and the hero of the Islamic Ummah and said: Funeral of Martyr Soleimani and Abu Mahdi Engineer In Iraq and Iran, it was the first severe slap in the face to the Americans, but the more severe slap is “software overpowering the absurd hegemony of arrogance” and “expelling the United States from the region.” That is possible.

During this meeting, the Supreme Leader of the Islamic Revolution gave four important advices to the officials and the people of Iran: “Be strong in all fields”, “Do not trust the enemy”, “Maintain national unity” and “Rather than thinking about lifting the sanctions, “Think about lifting the embargo.”

At the beginning of the meeting, Ayatollah Khamenei thanked the staff of the Martyr Soleimani Commemoration Headquarters and the martyrs who defended the shrine, and also appreciated the good actions of the family of Martyr Soleimani to keep alive the memory and path of that dear martyr. Popular capacities and cultural and creative efforts should be used to honor him.

He called the martyrdom of Sardar Soleimani a historical event and pointed to the fact that he became a national hero for Iranians and a hero of the Islamic Ummah, adding: The reason why Martyr Soleimani became a hero of the Iranian nation and different strata of the people (even those who did not imagine) honored him And they expressed their feelings to him, that Martyr Soleimani was the crystallization of Iranian and Iranian cultural values.

The Supreme Leader of the Islamic Revolution mentioned “courage and resistance” as one of the prominent features of Martyr Soleimani and said: “Courage and the spirit of resistance are Iranian characteristics and language and passivity are against the national spirit, so those who claim nationality but show language are contradicted.” are.

Ayatollah Khamenei considered “tact, ingenuity, sacrifice and altruism” as other characteristics of Martyr Soleimani and noted: That martyr was also a man of spirituality, sincerity and the hereafter and was never a hypocrite.

He considered the collection of these Iranian traits and spirits that had crystallized in Martyr Soleimani and displayed them in the countries of the region in practice, paving the way for that martyr to become the hero of the Iranian nation and noted: Martyr Soleimani, on the other hand, became the hero of the Islamic Ummah. It also became, because the efforts, morale and martyrdom of the beloved is “the code name for the awakening and mobilization of resistance in the Islamic world” and wherever there is a building of resistance against arrogance, their code name is “Martyr Soleimani”.

The Leader of the Islamic Revolution emphasized: Martyr Soleimani popularized the software of resistance and the model of struggle among the Islamic nations.

Ayatollah Khamenei, emphasizing that Martyr Soleimani defeated arrogance both during his life and with his martyrdom, added: “The President of the United States said that we spent 7 trillion dollars in the region, but we did not achieve anything and finally he was forced to go in the dark.” Go to a military base at night for a few hours. The whole world recognizes that the United States has not achieved its goals in Syria, especially in Iraq.

He said: The hero of this great work is Sardar Soleimani, which was done during his lifetime.

The Supreme Leader of the Islamic Revolution pointed out that the enemy was also defeated after the martyrdom of Sardar Soleimani, noting that the unforgettable funeral of millions of martyrs Soleimani and Abu Mahdi al-Mohandes in Iraq and Iran and the commemoration ceremonies of these two martyrs surprised the generals of arrogant soft war. It was a severe slap in the face to the Americans.

Ayatollah Khamenei, referring to another slap in the face of a missile attack on the US base of Ain al-Assad, added: “But a harder slap is the software overcoming the absurd hegemony of arrogance, which requires the efforts of our revolutionary youth and faithful elites, and the expulsion of Americans from the region.” Which requires the efforts of nations and the policies of the resistance.

He emphasized: “Of course, this is a severe slap in the face other than revenge, because the commanders and killers of Sardar Soleimani must retaliate, and this revenge is final whenever possible, although according to that dear, Soleimani’s shoes are honoring his killer.” .

In another part of his speech, the Supreme Leader of the Islamic Revolution made some important recommendations to the officials and the people.

Ayatollah Khamenei emphasized in the first recommendation: We must be strong in all areas, including economics, science, technology and defense, because until we are strong, the enemies will not stop greed, aggression and aggression.

The Supreme Leader of the Islamic Revolution, in expressing the second recommendation, said: My firm advice is not to trust the enemy.

The Leader of the Islamic Revolution added: You saw what Trump America and Obama America did to you. The hostilities are not just for Trump’s America, which will end when he leaves, Obama’s America also did bad things to you and the Iranian nation.

In his next recommendation, emphasizing “preserving national unity”, he referred to the united voice of the nation in many matters and said: the officials should not destroy this unity and unanimity of the people and divide the nation, but all three forces, especially the leaders. By strengthening and cooperating, they will strengthen the national unity day by day.

Criticizing some divisive remarks, he addressed the officials: “Resolve your differences by negotiating with each other.” Are you not saying that we should negotiate with the world, is it not possible to negotiate and resolve disputes with the internal element?

Ayatollah Khamenei’s last recommendation was to emphasize the “neutralization of sanctions.”

“The lifting of sanctions is in the hands of the enemy, but it is up to us to neutralize them,” he said. “So we need to focus more on neutralizing them than on lifting them.”

The Supreme Leader of the Islamic Revolution added: “Of course, we are not saying that we should not seek to lift the sanctions, because if the sanctions can be lifted, we should not delay even an hour, although it has been delayed for four years now and since 1995 all sanctions were lifted.” To date, not only have sanctions not been lifted, but they have increased.

Addressing the officials, Ayatollah Khamenei said: “If the sanctions can be lifted in the right, wise, Iranian-Islamic and dignified manner, this should be done, but the main focus should be on neutralizing the sanctions, which is your initiative.”

In the end, he noted: I support the officials of the country as long as they adhere to the goals of the nation.