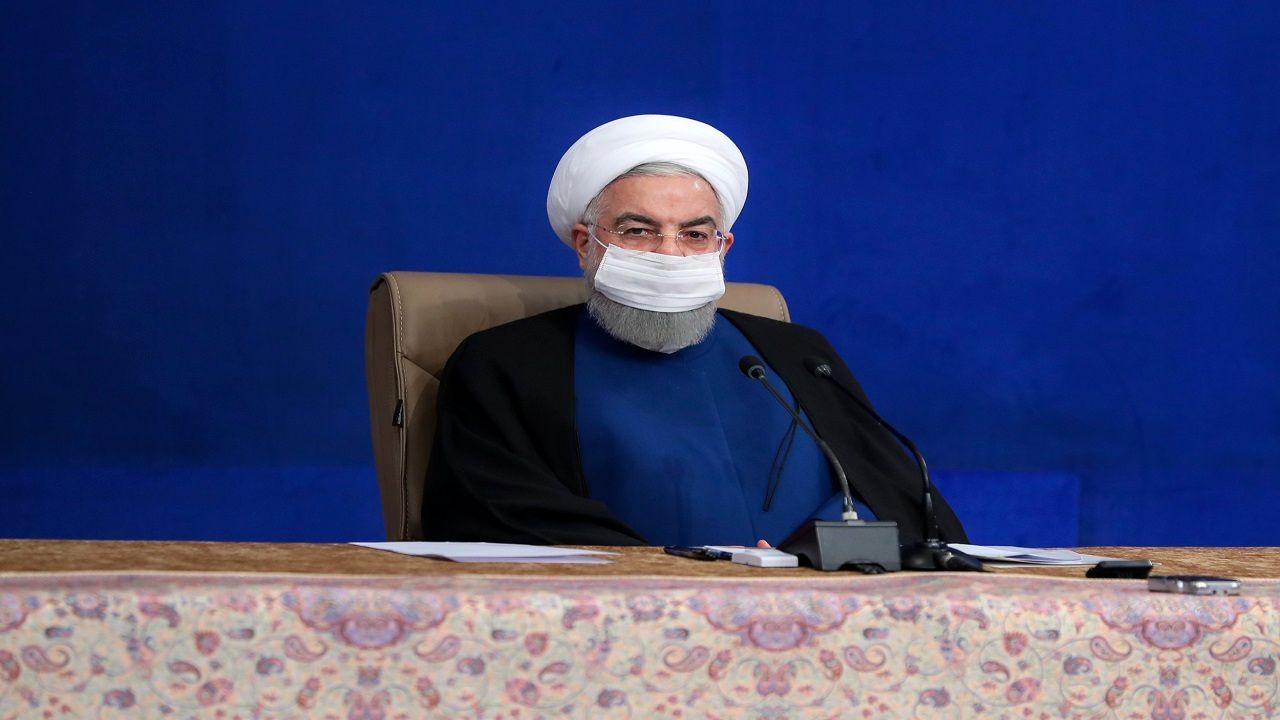 According to Shaman News: “The first message of the 1400 budget is that we have a very clear and hopeful outlook for the year 1400, and this is not based on the fact that We want to negotiate or agree or disagree with someone, but it is within the framework of government calculations.

Rouhani, stating that according to this budget is the announcement of better economic conditions for the year 1400, said: We announced this message by selling 2 million and 300 thousand barrels of oil next year, and next year the production capacity of 2 We have 1.3 million barrels and we have the power to sell and we will sell.

The President added: “Let the world receive the message well that the conditions of production and sale of oil of the Islamic Republic of Iran next year will be completely different from two years ago, although the businessmen of sanctions and despair may not be very happy about this sign, but any Now this is a beacon of hope for our great nation for next year.

Rouhani called the second message of the budget a supportive view of the people’s livelihood as well as the low-income groups and said: “This budget pays special attention to the people’s livelihood and also to the low-income groups, while today the government has two resolutions on water and gas that are similar.” It is a resolution that has been made about electricity before.

The President pointed out that in electricity, we have encouraged the people to consume and determine the reward for this low consumption “, he added:” In the framework of this plan, we announced that if the consumption is at the announced level, no money will be received from the consumer, ie electricity. It will be 100% free.

He said: “In today’s report, the Minister of Energy announced to the government that electricity consumption in November this year has decreased compared to November last year and the number of low-consumption households has increased by 3.5 percent and those with high consumption have reduced their consumption by about 13 percent.” And this is a way of promoting the right culture of good consumption for important services that come at a high cost to the government to provide to the people.

The President announced that the subscribers who observe the electricity consumption will not pay 30% of the electricity bill until the end of this year and next year, adding: in gas and water, from the calculation of January 1, the low consumption subscribers will not pay according to the announced framework. As one of the great honors of the Twelfth Government, on the one hand, water, electricity and gas have been provided free of charge to the low-income groups, and on the other hand, the people can be absolutely sure that we are self-sufficient in growth and development.

Rouhani pointed out: “Before we made gas free for the pressurized groups, we became self-sufficient in gas, that is, we increased gas production so much that even in winter we can be responsible and at the same time we can export gas.”

Referring to the tremendous growth of electricity production in the country from 1700 MW on average per year to 2,500 MW, he stressed: “By adding virtual power plants and the culture of operation, consumption will be reduced.”

The President also referred to the government’s actions in the field of dam construction, water purification and control and reduction of casualties and specified: “After carrying out these basic measures, we made water free, meaning that this government did not act on slogans and in 7 years We acted in support of the low-income people of the society, which is the general policy of the government.

In next year’s budget, 4,200 Tomans has been foreseen for the basic commodity

Rouhani, emphasizing that the government’s view in the budget is to support the low-income groups and pay attention to the people’s livelihood, to increase the salaries of employees and retirees by 25% in next year’s budget, pay 73,000 billion tomans to support the people as subsidies or livelihood assistance. He pointed out the allocation of 18,000 billion tomans to reduce absolute poverty and added: In next year’s budget, 4,200 tomans of foreign exchange is foreseen for basic goods, and if the government makes other decisions later, this money will return to the people themselves.

Rouhani called non-reliance on oil another message of next year’s budget and clarified: “This does not mean not selling oil, but we extract and sell oil and use this opportunity because we should not stop people’s incomes and sources of income, but the important thing is this.” The current budget is not dependent on oil, but for the development of the country, we must use the budget directly or through the development fund.

“If Iran could export 10 million barrels of oil in 1990 and 1991, they could not impose sanctions on the country, and when oil exports were 2 million barrels, they could easily do so,” he said. They boycott and know that this is a weakening of national power.

The President said that if your exports of petrochemicals and food products are doubled and the exports of mining industries and mineral products are tripled today, they will not have the power to impose sanctions on you. “If the world market is in your hands and you are present in the world, they cannot be present.” Delete and this is not possible and when it comes down they can easily bother.

The President announced the government’s readiness to sell more than 2.3 million barrels of oil per day next year and stressed: “This money will be used for the development of the country and we do not want the current budget to rely on oil, but proudly rely on the development budget.” There is nothing wrong with oil.

Rouhani mentioned the reform and reduction of the exchange rate as another measure of the government in next year’s budget and specified: “Increasing the value of the national currency is one of the important messages of the budget, so we considered the currency based on 11 thousand to 11 thousand and 500 tomans to value It is possible for our national currency to rise in a situation next year, and none of them wishes that this action was done on the basis of accurate calculations.

The President announced the downsizing of the government, the sale of government shares on the stock exchange or in the market through auctions, the agility of the government, the transfer of the economy to the people and operational budgeting as other budget messages: One of the honors of the 11th and 12th governments is to budget He took it out of the closed room and brought it behind the glass room for all the people to see.

Rouhani continued: “As soon as the budget is presented to the parliament, all people see in cyberspace how much we allocate to each person and system, and criticize, encourage, discuss and correct that this is the right of the people, how much is allocated from the budget and the nation’s bag.” Has found and people have to reconcile claims with actions.

He considered the budget of 1400 as the first joint work of the twelfth government and the eleventh parliament and asked the members of the Islamic Consultative Assembly to work together to approve the budget in due time and announce it for implementation.

The President said that in the past few months, there has been no opportunity for joint work between the government and the parliament, adding: “The esteemed parliament has archived the government bills in one room and has started a tsunami of projects, which is not a problem, but this is the opposite.” The goals are high and the country is developing, and with cooperation, we can move forward better.

Referring to the creation of a better atmosphere and opportunity and smoother the path of the country’s diplomats in recent months in the field of foreign policy and diplomacy and cooperation with neighboring countries, the region and the world, Rouhani stressed: to progress and achieve results in diplomacy need to hear a single voice And we are one of tastes, which of course does not mean that the parliament is a citizen of the government.

Emphasizing that the country should have a voice in a unified foreign policy and behave more maturely, more prudently and with more foresight, he clarified: “National interests should be the principle and we should put aside partisan interests.”

Rouhani also referred to the policy of reducing the nuclear commitments of the Islamic Republic of Iran in 1998 and emphasized: the countries that remained in the Council did not fulfill their obligations properly and now the installation of modern and new IR2M centrifuges in Natanz is not new. They mourn and beat their breasts because we announced it before.

Emphasizing that the reduction of liabilities is reversible, the President said, “Whenever the parties of Borjam fulfill their obligations, we will return.” The profession lined up a piece of paper, the next person left a good piece of paper and signed it nicely so that we could return to the first place, and it would not take time at all.

Rouhani said: “The actions taken by the current US administration were 100% wrong and to the detriment of the world’s trust in the United States, the nations and the stability of the region and the Iranian nation.”

Referring to the recent rains in the south of the country and emphasizing that the government should be based on climate change, Wieder added: “According to the report of the Program and Budget Organization, 2,546 billion tomans have been paid to compensate for flood, water and sewage damages in Khuzestan province.”

Rouhani pointed to the efforts and actions of the Ministries of Energy, Roads and Urban Development, Agricultural Jihad and the country to solve the problems of the people in the south of the country and emphasized: We will not let the people be in trouble and these incidents must be prevented.

The President also referred to the efforts of the government and the Central Bank to purchase the Corona vaccine from a foreign country and the beginning of vaccination in the country, emphasizing: Of course, people should know that we should send 100 curses to Trump in every action in the field of medicine, equipment and vaccine. Because the whole country has to be involved for weeks and sometimes months by creating problems and harassment to solve the simple transfer by phone or Swift, and this ugly group in the White House did not spare the health of the people and the disabled.

“Of course, this does not mean that people think that the vaccine will not reach them and that we will overcome these problems at any cost,” he said.

Referring to the problems of municipalities in improving intercity transportation and the lack of wagons for intercity trains and buses, the President stressed: “With the cooperation between the Ministries of Oil and Interior, it was decided that the resources needed to purchase parts and buses for this quarter Be provided.

Rouhani pointed to the actions and special attention of the government of prudence and hope to the issue of rails and railways in the country and emphasized: In the government of prudence and hope, we became self-sufficient in rails, which used to buy rails from abroad, but today rails are produced in the country We can even export after a short time.

The President said that tomorrow, in the virtual meeting of the Presidents of Iran and Afghanistan, the Iranian railway will be connected to Afghanistan for the first time, adding: “This will be one of the honors of the twelfth government and by the end of this year and the end of the government Riley continues.