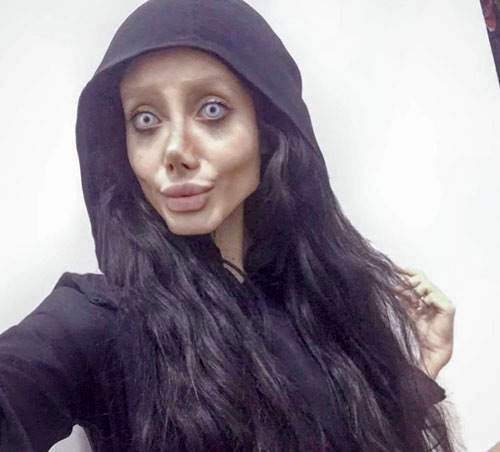 سحر تبر She is the name of a 19-year-old girl who became famous for her activities in cyberspace a few years ago.

The weird makeup of this young girl is one of the main reasons for her fame سحر تبر Was. However, his activities gradually reached the point where the law stood against him, and he was arrested in October 1998 on charges of aiding and abetting corruption on earth, inciting corruption, and insulting the sacred through insulting the sacredness of Islam, and illegitimate possession of property.

While the news of Sahar Tabar’s arrest and trial was as controversial as all aspects of the character, no news of the newsmaker had been published for several months. He spends his time in news silence in Qarchak prison in Varamin.

Sahar Tabar announced in this interview that he was sentenced to 10 years in prison by a court ruling, while he was acquitted of the two charges.

Sahar Tabar also said he had appealed the verdict and was awaiting a final verdict.

But just a few days after the news of his 10-year prison sentence was published, he called and this time announced his release.

“The judge agreed to convert the detention order into bail, and I was released on bail,” said Fatemeh Khishvand.

Who is Sahar Tabar?

Sahar Tabar, Fatemeh Kh. He was born on March 24, 1997 in Tehran. An ordinary girl who happens to have a beautiful and well-proportioned face. Sahar Tabar was first known for these characteristics; Scary gray eyes, a crooked nose, very large lips and a conical skull, and most importantly, amazing slimming. It was rumored that a girl with 50 cosmetic surgeries wanted to look like Angelina Jolie.

Her strange pictures were placed next to Angelia Jolie’s picture. It looks like a scary cartoon of Angelina Jolie. Some were even more careful and found similarities between him and Tim Burton’s “Dead Bride”; Which, to be fair, was not dissimilar. The story that excited. Sahar Tabar published new photos. Pictures of him with his cheeks pierced and his arms and legs tilted.

But after a while he decided to show his true face. Sahar Tabar Instagram or Fatemeh was the real world of an ordinary girl.

Sahar Tabar announced that she was changing her face with digital make-up and tools. He also did this for fun. The rumors, however, were so great that the truth and falsity of his words were not revealed. It was not clear which photo is before the operation and which is after the operation! Was there any action at all, and if so, how many actions were there ?! Sahar Tabar has said that she has performed a series of surgeries, such as injecting her lips and performing liposuction, but most of it is makeup and Photoshop.

He considers his work to be an art that makes his face more funny with each photo. Of course, he did not talk about his followers and income. DbqNiO7Fcv3V What is the purpose of Sahar Ax? Is everything real or are we deceived? Many rumors were made about Sahar Tabar surgery. One said: her beauty practice has deteriorated and she has lost her shape and appearance. One said, “Angelina Jolie is in love.” Some said he had anorexia and thought he was obese and lost weight. There were also rumors that Sahar Tabar failed in love and decided to make herself look like the character of the “dead bride”.

Some even said that photos are Photoshop; And Photoshop is not very professional. It was said that many details of the crookedness of his legs and the curvature of the walls in the picture all show pictorial tricks. However, his artistic creativity cannot be ignored. An interview with Sahar Tabar has been published that asks people not to judge it. Sahar Tabar said in this interview: People who do not know him judge and curse him by seeing a photo of him. This is strange to him because the photos are simple and ordinary in their own right and there is no need to swear.

Sahar Tabar has said that she does not seek margins and has chosen this lifestyle because she loves it. But this love is now expensive for him. Sahar Tabar is in custody to answer charges of making money from illegal methods, debauchery and promoting violence. Sahar Tabar’s Instagram page has been closed and he has lost all his followers.