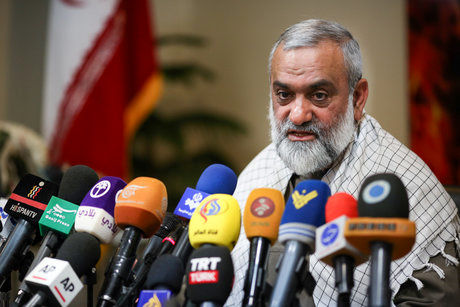 Sardar Naqdi in the commemoration ceremony of the 9th of Dey in Lolagar Mosque, stating that the 9th of Dey is the day of the people who stood in the footsteps of the revolution in different events, referred to the events of 1988 and said: They agree that we must continue to be responsible. All the media in the world come and go behind them.

He continued: “They used all the symbols of the revolution in this process and tried to create suspicion in the Islamic Revolution.” They attributed themselves to Imam Khomeini, or chanted the slogan of God Almighty, or tried to weaken the present Imam in the name of Imam Khomeini in order to seize power.

Sardar Naqdi pointed out: The Supreme Leader of the Revolution is the one who has been closest to Imam Khomeini’s thought. The leadership continued the revolution without retreating from the path of the Imam. In those events, many officials remained silent and the leadership remained and the nation, but the nation shone brightly.

He continued: “If we did not have someone like the leader of the revolution who had the courage to stand against the enemy, what would happen to the revolution? Without this brilliant leadership, we could not get out of the five great wars with security and authority, and if his command in Without the armed forces, we could not capture the United States and Britain and raise our hands to the Mediterranean.

The deputy coordinator of the IRGC stated: The scientific and military progress of the country is the result of the guidance of the revolutionary leadership. Without the guidance of the leadership, where could we have a presence in the Red Sea with authority? Or maintain our national unity?

Referring to the extensive activity of the enemy media, Sardar Naqdi stated: The seditionists did not recognize salt in 1988 in order to gain power and formed an alliance with all the enemies of the revolution. They connected with foreigners and the British embassy and even terrorist groups, but the nation recognized that it was not a matter of elections and came on the scene on the 9th of January, creating an eternal epic and thwarting the conspiracies of the enemies. On the ninth of January, the people shone.