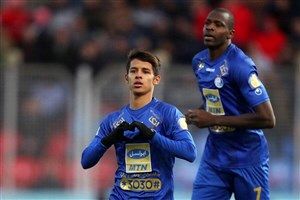 Without a doubt Mehdi Qaidi He is one of the most talented players in Iran at the moment, of course, in these 7 games Independence In the last season, he has appeared really critical and, as the saying goes, he is not himself at all. Ghaedi played much better and more useful when Stramaccioni and Majidi, and disrupted the opponents’ defense at least 5 or 6 times in one game. Ghaedi was completely fit and motivated until the end of last season, but this year he seems to have a problem that has affected his football. After 7 weeks of the twentieth league, Mehdi has not scored a goal and has given only two assists! Of course, Ghaedi is still a dangerous player at the moment, but he is miles away from Ghaedi last season.

We did not have a bad memory of Stramaccioni from this player. A relative of the Italian coach said: “In the first days when Estra came, he was a leader in tactical matters and could not show his talent, but one day Stramaccioni called Mehdi and said to him:” Look, boy! “Play any model you want, play all over the field and dribble and …”

This person close to Stramaccioni said that it was right after the game that Ghaedi’s engine was started. He constantly dribbled, defended, scored, assisted and, in short, his technique was in favor of Esteghlal and in the service of the team. In fact, Stramaccioni realized well and in time how he could get the best game from the leader, and he realized the difference between him and the other players, and of course he won. It was right after Ghaedi and Diabetes shone that Esteghlal became the leader even with Stramaccioni, and even in the time of Farhad Majidi, Ghaedi played very well and scored goals.

From the outside, when we look at the events of Esteghlal, we come to the conclusion that Stramaccioni knew how to play the leader, and Majidi also communicated well with him and became friends, but Mahmoud Fekri He has not yet been able to use the potential of the leader and may need more time. Of course, if Diabetes returns, both the conditions of Esteghlal’s offensive line will improve and Ghaedi will start, but Fekri can use this interesting memory for the benefit of himself and his team, because if Ghaedi goes, Esteghlal’s offensive line will also start and open the opponents’ goal like last season. Opens many times.