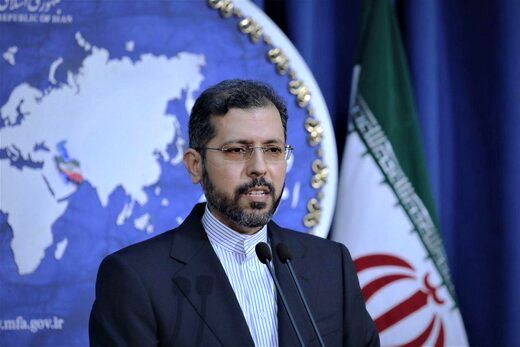 Saeed Khatibzadeh this morning in his weekly press conference with the media, which was held virtually, congratulated the birth of Hazrat Zeinab (PBUH) and Nurse’s Day and also Yalda night, explaining the developments in foreign policy in the past week said: Today at 11: On the morning of the 30th, the informal meeting of the foreign ministers of the Borjam member will be held by video conference. This meeting will not focus on specific issues of Barjami, but will review the set of developments of the past few months.

He continued: “On Wednesday, the Deputy Prime Minister of Azerbaijan will travel to Tehran.” Also on Saturday, we witnessed the opening of the second border point between Iran and Pakistan, which is a major development after the opening of the Khaf-Herat project, which shows Iran’s special attention to its neighbors.

Referring to the visit of Seyyed Abbas Araghchi to Afghanistan and Oman last Friday, he said: “The document of comprehensive cooperation between Iran and Afghanistan has reached an acceptable point.”

Regarding the recent remarks of the Russian Foreign Minister about Iran’s readiness for non-negotiated talks, Khatibzadeh clarified: It is and it cannot be opened. Resolution 2231 is clear.

“Some are interested in change,” he said. “We have said that there will be no renegotiation and that the parties will return to their commitments.” On other sub-issues, Iran has shown with maximum resistance that it will not negotiate with anyone on national security and its superior interests. Therefore, these speculations do not correspond to the facts. Iran has its own defense priorities and acts accordingly.

The Foreign Ministry spokesman also commented on the oil minister’s visit to Russia and some comments about the sale of 4.5 million barrels of Iranian oil to Russia: “I have not heard these details and I do not know if there will be that many.” Of course, such trips are common. Iran’s share in oil sales is clear, and Iran is trying to secure its share and regain its rights.

Khatibzadeh said about the recent remarks of the Director General of the IAEA about Borjam Europe: “It is the relations between Iran and the Technical Agency that these relations should be maintained within this framework.” Whenever the agency has a technical view of the relationship, the relationship has been clear and pragmatic.

He continued: “Grossi said that he does not mean what has been taken and we accept their interpretation, but our advice to the IAEA is to stay away from political issues and pressures in order to maintain both the dignity and weight of the IAEA and the technical cooperation between Iran and Iran.” The agency is maintained.

A spokesman for the Ministry of Foreign Affairs reminded of the recent remarks of the Canadian Foreign Minister about the crash of the Ukrainian plane: In the case of the unfortunate incident, the crash of the Ukrainian plane, all the institutions of the Islamic Republic and the Ministry of Foreign Affairs are saddened. They are all the children of the nation, and there is not day or night that we are not saddened by this incident. The State Department also sought to clarify the dimensions of the matter at the highest level.

The head of the Center for Public Diplomacy and Media of the Ministry of Foreign Affairs stated that all stages of the investigation are being followed by the technical and judicial centers, adding: “Despite all the grief and sorrow caused by this incident, the institutions of the Islamic Republic pursued this case and investigated this.” The case has not been delayed. Today and tomorrow, the technical report of this story will be published online.

Khatibzadeh said that the Ministry of Foreign Affairs is trying to move the work forward with the utmost transparency. It is politicized. I’m sorry that Canadian politicized politicians want to trade for themselves out of grief.

In response to a question about the opening of the second border crossing between Iran and Pakistan, Khatibzadeh said: “One of our priorities has been good neighborliness, and in this context, we have designed important projects.” We had active borders on the western border, but we had only one active border with Pakistan. This issue was raised and approved during the Foreign Minister’s visit to Pakistan. This crossing will both shorten the route between Iran and Pakistan and will be key in developing the border strip and creating security, stability and development.

The spokesman for the Ministry of Foreign Affairs, stating that we will continue this way on the eastern borders, said: “We hope to bring our regional trade relations to an acceptable level in this direction. We have trade relations in the region that did not exist before.”

“There is a basic principle that all Iranians have the legal right to have an Iranian passport and identity card,” he said, referring to the situation of an Iranian citizen living in Gaza who has asked to return to Iran. No one can deprive them of this right. Of course, they have to prove that they are Iranians. The consular route is known in this regard. We do not have a ban on getting a passport.

Regarding the latest efforts to purchase the corona vaccine, he said: “The State Department has a specific responsibility in the area of ​​Inchina, and that is that the responsible agencies do their job properly. In the case of Corona, the president follows up on the issue every week. The issue of vaccine has been followed through various channels. Of course, the Ministry of Health must explain itself. The routes requested by the Ministry of Health were completed without interruption and we even had some recommendations.

The head of the State Department’s Center for Public Diplomacy and Media added: “On the issue of vaccines, this has been a priority in Mr. Zarif’s travels, such as in Cuba and China.” Of course, the purchase of vaccines from Kovacs is also followed so that the vaccine reaches the people. Of course, the final decision is made by the Ministry of Health.

Regarding Zarif’s visit to Baku, Khatibzadeh said: “The visit of the Foreign Minister was regional and will definitely take place.” Of course, preparations must be made for it, but not doing it has not cut off communication and contacts. We hope to continue understanding the conditions of the path that has begun.

Referring to the visit of the Deputy Prime Minister of Azerbaijan to Tehran, he stated: “In addition to serious border issues with the Republic of Azerbaijan, we have joint facilities for the liberated cities and this visit is important to reach preliminary agreements on these issues.”