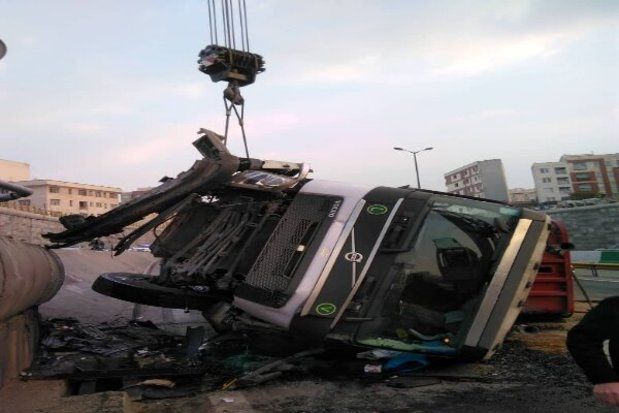 Seyed Jalal Maleki informed the reporters on Friday morning about the overturning of a trailer on Imam Ali Highway and stated: At 6:50 this morning, a trailer overturned on the north-south route of Imam Ali Highway, after Sabalan Bridge. It so happened that the incident was reported to the 125 system of the Tehran Fire Department, which immediately sent two fire stations and a 55-person crane to the scene.

A spokesman for the Tehran Municipality Fire Department said that the rescue forces arrived at the scene within 3 minutes, adding: “After the presence of the forces, a trailer was seen, after deviating from the main route, colliding with the walls on the right side of the highway and completely overturned.”

Referring to the gas leak that occurred as a result of the collision of the trailer, Maleki said: “Traffic was controlled in the presence of road workers and firefighters started their work, and the 45-year-old driver of the trailer, who was trapped in the car, lost his life.” .

He said: “After the firefighters’ operation, the trailer was transferred to a safe place and handed over to Rahvar to investigate the incident.”

A spokesman for the Tehran Municipality Fire Department said: “According to experts, there is the highest probability of driving accidents in the twilight weather, and contract companies, drivers of heavy vehicles, and buses should observe safety measures to prevent any accidents.”