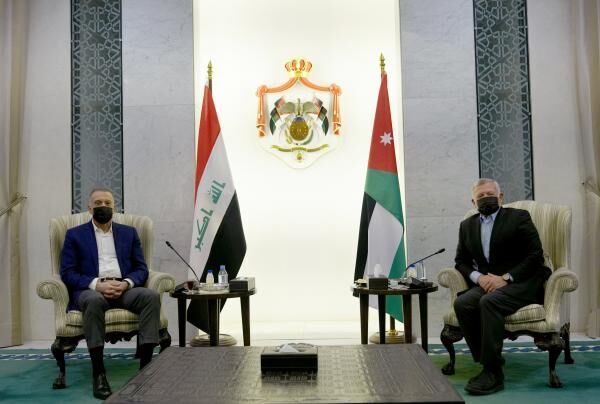 The statement added: “During the meeting, the two sides discussed bilateral relations and common issues of interest, especially in dealing with current economic challenges and ways to improve the effects of the corona epidemic on the two countries’ economies.”

The statement did not provide further details on the meeting between the Iraqi Prime Minister and the King of Jordan.

Iraq and Jordan are cooperating with Egypt in the form of a tripartite coordination mechanism. The city of Cairo recently witnessed trilateral consultations between the three countries to strengthen relations and cooperation in various fields.

The last tripartite meeting between the three countries at the level of foreign ministers on the mechanism of tripartite coordination on inter-regional and regional issues was held last October 13 in Cairo.

The consultations took place in the framework of implementing the results of the summits of the three countries of Iraq, Egypt and Jordan, which were held last September in the city of Amman.

Amman, the capital of Jordan, last September 4 witnessed a tripartite meeting between King Abdullah II, Iraqi Prime Minister Mustafa al-Kadhimi and Egyptian President Abdel Fattah al-Sisi, during which regional co-operation, led by the Palestinians, was coordinated. The spread of the “corona virus” was discussed.

Jordan, Iraq and Egypt have held three summits so far, the first in March 2019 in Cairo, the second in September in the United States and the third in Amman last August.