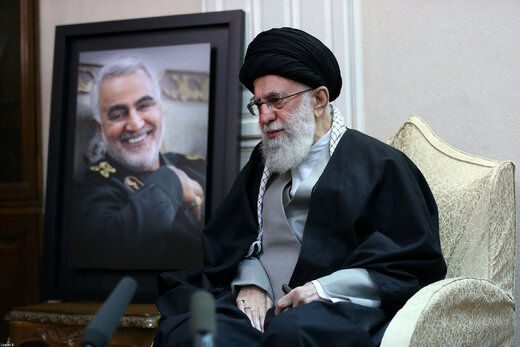 At a ceremony held in Kerman a few days ago, Sardar Seyed Mohammad Bagherzadeh, Commander of the Search Committee of the General Staff of the Armed Forces, spoke about the moments of his burial.

According to Tasnim, he referred to the story of the burial of the holy bodies and said: “The night we were taking care of the condition of the bodies in the Ascension of the Martyrs of Tehran, we had a special situation.” The components of the bodies were mixed together and the pieces and bodies of the martyrs had to be attached to the main body. Some of the martyrs were severely dismembered. Some were more normal and the body was less damaged. The bodies of Martyr Abu Mahdi al-Mohandes and Martyr Haj Qasim Soleimani were dismembered. Haj Qasim’s body was divided into five parts. We had to join the components.

He added: “Their DNA was checked quickly and friends were able to determine and assign them at the IRGC Medical Research Center.” The night before the ceremony, when the bodies wanted to prepare for the prayer for the residence of Hazrat Agha at the University of Tehran and then for a historic funeral, we came to the Ascension of the Martyrs. It was not possible to take a bath for the bodies. We had to give it tayammum, we tayammum them according to our own opinion, shrouded them, equipped them and prepared them, and then put them in the coffins and it was prepared for the next plans and funeral.

Sardar Bagherzadeh said: I had asked God and the martyr himself that day to grant me success in serving Hazrat Agha because there was no possibility of crowds, hustle and bustle. I would like to go and report to the service of Hazrat Agha on the condition of the body of the martyrs. Miraculously, I was honored in the presence of Hazrat Agha. Before the prayer, under the position where the gentleman stopped for a moment, national figures and the leaders of the forces, Ismail Haniyeh, the supreme commanders of the IRGC, including Sardar Salami, were also present. I was led there too. His magnanimity led me there. This respectable person who was there told me to report the condition of the bodies to the gentleman.

Referring to the meeting with the Supreme Leader of the Revolution, he said: “After I went forward and greeted him and kissed his hand, I offered my service to him. Last night, we took action to prepare the holy body of the martyrs.” We could not bathe them, they performed tayammum and they were equipped. The youths were present at the Ascension of the Martyrs. Shrouds, cotton, cloth, nylon and other items were available, but we were very bothered in preparing these bodies. In the sense that we could hardly put the pieces of these bodies together. We arranged the scattered meats so that we could shape them into a coffin.

The commander of the search committee for the missing said: The martyr did not have a head, part of his shoulder was left and part of his ankle was down and his hands and limbs were beaten. These were Arba Arba. I offered these to the service of Aqa, and then I referred to Karbala of Hazrat Aba Abdullah (AS) and said, “We, who gathered the martyrs with difficulty in this situation, do not know how Imam Zayn al-‘Abidin (as) in Karbala can be alone with the body of Hazrat Aba Abdullah “They prepared the Prophet (peace be upon him) for burial ?!”

He referred to the unprecedented statements of the agha and said: the agha said, “You were in trouble, these were martyrs of the battle,” meaning they did not have a bath or shroud. In fact, all the discussions we had, we saw with a jurisprudential fatwa, the atmosphere changed suddenly and these martyrs “Layghasl and Likfen” did not need ghusl and shroud. They did not even have tayammum. Sir, they wanted to say this; But the place of what changed this jurisprudential level goes back to the fact that we learned from the war; This issue was also consulted by the Imam and all authorities believe in it. It is also stated in jurisprudential books that the battle and the limits of jurisprudence are the areas where the parties throw weapons at each other.

Referring to the weapons of the eight-year war, Sardar Bagherzadeh said: “In the war against Saddam, the weapons that were fired were short and long range mortars, arrows and finally artillery; We knew this area as the battle area. If there was a bombing, when someone was martyred in the designated area, he would be considered a martyr, but if he was martyred in a war in the cities inside the city where missiles were fired, he would not be considered a martyr and should be bathed and covered. Martyr Marakeh has such a position from the jurisprudential point of view; That is, they said where there was a war and the weapons were thrown in the same direction.

The commander of the search committee for the missing continued: “But in this situation, Hazrat Agha said something new and this has no precedent.” It has been unprecedented to jurisprudentially define a battle based on the presence of a person; As soon as Hajj Qasim arrived at that point, that is, near Baghdad airport, and was targeted by the enemy’s arrows, the very presence of him at that point, and consequently the cowardly attack of the enemy on him and his companions, turned that place into a battle; It conveys the weight and position of a human being; Where it was targeted by the enemy, it became a battle, and that martyrdom is also considered martyrdom in the front line, and it is considered “the best of the martyrs who are killed in the first row.”