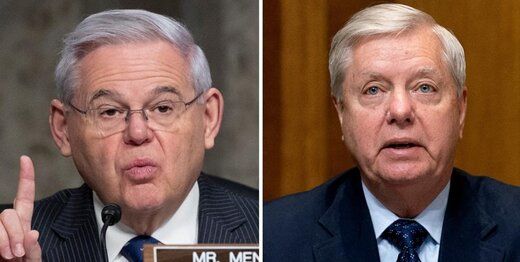 The letter, led by influential Democratic Sen. Bob Menendez and Republican Sen. Lindsey Graham, follows similar bipartisan pressure in the US House of Representatives, backed by dozens of US lawmakers.

The Graham-Menendez draft letter claims: “Looking ahead, we strongly believe that we must use all the power of diplomatic and economic means in coordination with our allies in the UN Security Council and the region to reach an agreement that prevents Iran from Always use nuclear weapons and significantly limit their destabilizing activity throughout the region as well as its missile program.

Although the document does not explicitly rule out a return to the IAEA, it calls for demands outside the IAEA, which are a protest against the revival of the 2015 agreement, which deals only with Iran’s nuclear program.

Menendez, who is responsible for promoting the letter under the auspices of AIPAC, is chairman of the Senate Foreign Relations Committee.

As of Friday, Chris Koons, Joe Mancin and Ben Cardin were the three other Democratic senators who joined the 18 Republican senators in supporting the letter, according to the Zionist lobby.

Koons, who represents Delaware, Joe Biden’s hometown in the Senate, is close to the US president. He was recently sent by the US government on a diplomatic mission to Ethiopia.

“We believe it is important to consult with European partners, Israel and the Gulf (Persian) security partners on the way forward with Iran,” the letter reads. Ibrahim’s recent agreements (referring to the compromise agreements of some Arab countries with the Zionist regime) raise the hope that our partners and allies can work together for greater regional cooperation.

According to the report, the Senate letter sparked discussions about policy toward Iran even before it was published. “Iran remains the biggest threat to Israel and the United States in the Middle East,” AIPAC said in a warning sent to its supporters by text message in recent days. An Iran would be a direct threat to US interests and an existential threat to Israel. “Please ask your senators to sign a bipartisan letter to President Biden and express the bipartisan consensus that a nuclear-armed Iran would pose a serious threat to the national security interests of us, our allies and partners.”

The Zionist lobby of AIPAC was the pioneer of the campaign to reject the Iranian agreement after it was signed in 2015.