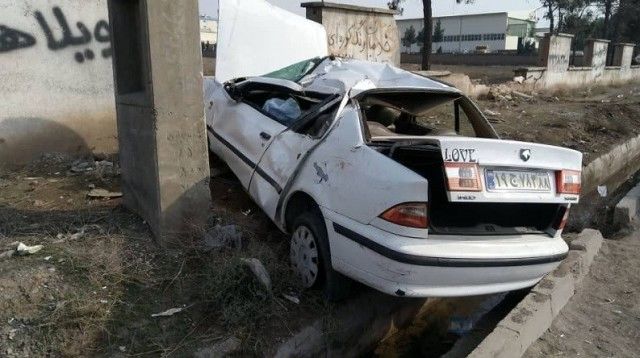 A spokesman for the fire department said: “A Samand car deviates from the route and collides with an electric light pole. Watching this scene causes the accident of 6 other cars and the injury of 5 people.”

He added: a Samand vehicle with two occupants deviates from the route for unknown reasons and collides with an electric light pole on the side of the road. A 26-year-old man was seriously injured in the accident.

A spokesman for the fire brigade said: “Unfortunately, passing cars are slowing down and watching the scene, which causes a false traffic jam.”

Maliki stated: Due to the slowdown, 6 other vehicles, including dump trucks, Pride and Peugeot, will collide.

He added: “Before the firefighters arrived, the passengers got out of the vehicles and finally 5 people were injured in these accidents, which included three women and two men.” Of course, one of them is in critical condition.

He concluded by complaining about the misbehavior of the people in the occurrence of accidents and incidents, he said: The firefighters’ operation ended at 12:31 but if the people did not stop to watch the scene of the accident, maybe the other six cars would not have collided.