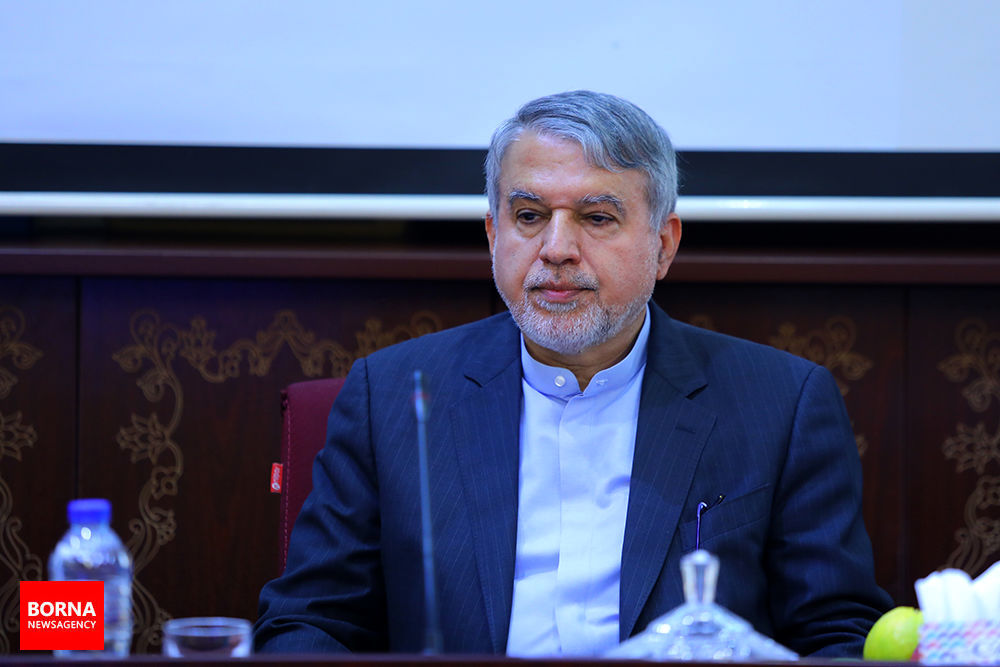 According to Borna, Seyed Reza Salehi Amiri, the head of the National Olympic Committee, said in a press conference today: “People talk a lot in the field of diplomacy, but they do not have the knowledge of diplomacy;” Diplomacy requires several requirements, including political relations between countries, which are influential in gaining a seat. We interpreted diplomacy in sports as a chair, which I think is wrong. The first requirement for a seat is political relations, the second factor is economic power, naturally China, Japan and South Korea, which have more costs and stronger facilities and infrastructure, have the opportunity for more diplomacy and seats.

He added: “So the discussion of economic power has a great impact on winning a seat, Qatar with a small population but with good facilities and economic power has been able to convince the world to host the World Cup and the Asian Games. The third point in winning a seat is to have long-term goals, which means that if we are to win 50 international seats in another decade, we must start planning now. Political knowledge and bargaining power are very important in gaining a seat, a person sitting in Iran cannot get a seat. Our problem in sports is the lack of bargaining power with other countries. Most countries are in constant contact with other countries and their activity is high. So having a long-term plan, political knowledge and bargaining power is important to win a seat.

Saleh Amiri continued: “It does not matter if we say that we won 12 seats in the Asian Council, it is important that only one of these seats is effective, the other 11 seats belong to commissions that sometimes do not even have a meeting in 4 years.” Many seats have no effect on Iranian sports. Those that do not have this ability have little effectiveness or formality. We just have to look for an effective seat. With economic power, long-term goals, knowledge of diplomacy and bargaining power, we can move toward effective seats. The General Assembly of the Asian Olympic Council created a new opportunity for sports diplomacy. About 45 countries participated in the council, no telephone or correspondence is established.

The head of the National Olympic Committee further explained: “Our first meeting was with the Minister of Culture, Sports and Youth of Oman.” Oman has strong, stable and long-term relations with Iran, and their view of the Islamic Republic of Iran is very positive, and we agreed to develop sports relations, especially in the Olympic and Asian disciplines. A draft memorandum of understanding, which will be strategic and 10 years old, will be signed soon. Omanis need our sport more.

Referring to the elimination of karate from the 2024 Olympics, Saleh Amiri emphasized: We also met with the Asian head of karate. He considered the place of karate in the first world. Iranian karate is a leader in Asia and the world, and Japan is Iran’s main rival. He considered the performance of Iranian karate strong, and we also protested against the elimination of karate in the 2024 Paris Olympics. The next day we met with the World President. He believed that the elimination of karate was political, and we strongly objected to this. We also had three suggestions: first, to raise this issue at the Asian Olympic Council, second, to express our protest in writing and to correspond with the well-known countries in this matter, and third, to launch a campaign, which was highly welcomed by the President of the World Federation. it placed. I raised this issue at the Asian Olympic Council meeting with the members of the executive board. We spent a lot of time on karate during this trip and one of the topics we talked about was protesting against this decision and now we have to wait for time.

Saleh Amiri said: “We raised the financial cooperation that we needed the Asian Council to help us.” In total, we are satisfied with the whole meeting. We also participated in the Executive Board of the Olympic Council, which finally selected Qatar because it had the necessary infrastructure for the Asian Games. At the Asian Olympic Council, a serious confrontation took place between Qatar and Saudi Arabia, which eventually hosted Qatar for the 2030 Asian Games and Saudi Arabia for the 2034 Asian Games.

The head of the National Olympic Committee said: “We also met with the Iraqi Minister of Sports. They are very interested in cooperating with Iranian sports and we agreed to have a memorandum of understanding with the Ministry of Sports and the National Olympic Committee of Iran and the Iraqi Olympic Committee.” We had a constructive and good meeting with Sheikh Ahmad and they responded positively to all our requests. Regarding handball, Pakdel, the president of the Handball Federation, had requested that the Asian Youth Championship event be held in Shiraz. It is March.

Salehi Amiri added: “We had a meeting with the Minister of Sports and the President of the 2030 Qatar Games.” He had previously sent a delegation to Iran and asked for a vote, which we made subject to national scrutiny, where we announced that we would vote for Qatar. We met with the Uzbeks who voted for the 2025 Youth Games. Uzbekistan, after Kazakhstan, is on the path of developing sports. We have no involvement in the field of political relations. In the field of sports relations, we are cut off from Saudi Arabia, but we play in the form of clubs in Asia. I hope that by expanding sports relations, we will be able to increase the field of bilateral cooperation, which is subject to obtaining permission from political authorities.

The head of the National Olympic Committee, referring to the sabotage of the Saudis in hosting handball, said: “Handball is not a political issue and the tournament is scheduled to be held in Shiraz in March, but Asian officials said, considering the red situation in Iran and Shiraz, we decide to host Transfer to diameter. During this trip, during negotiations with Sheikh Ahmad and negotiations with the President of the World Federation, it was recommended that these competitions remain in Iran. This event will stay in Iran; Unless Corona stays in this condition and Corona High Command does not allow the tournament to take place. Sheikh Ahmad promised to host Iran if the conditions were not red.

Answering the question whether the issue of cooperation in hosting the World Cup was raised in the negotiations between Iran and Qatar, Wieder said: “We had meetings in Tehran with the presence of the president’s advisor in the free zones and the representative of the Ministry of Foreign Affairs.” It is planned to include a clause for the use of free zones for the camps of the selected teams of the World Cup, the most important of which is the infrastructure of Qeshm and Kish, which is a very important point and should have directional standards. We do not have a world standard land at the moment and I hope that the necessary work will be done at this time.

Regarding the name of the Iranian convoy at the Tokyo Olympics, he said: “We called for the slogan of the convoy, which is the most popular opinion of Iranian stars and Iranian stars.” The final name will be in the next meeting of the headquarters. The symbol is the same as Arjan Cup. We choose a name that symbolizes the martyrs, heroes and Iran. Some criticized why the names of the martyrs were not chosen for the Iranian sports caravan, which surprised me, except that Martyr Fakhrizadeh and other martyrs are not among the stars of Iran. Our goal is national unity. Regarding the selection of Iranian sports caravan clothes, we went beyond the tasteful approach and handed over the responsibility to the fashion and clothing headquarters. At first, we had 213 designs, which reached 10 designs, and we were supposed to choose the clothes during an judging process. We are now in the final selection stage and we will decide on it in the next few days. We handed over the clothes to the design community and had no involvement.

Salehi Amiri explained about the measures taken to obtain effective seats: It will not be possible to obtain an effective seat until the requirements are met. Influential institutions such as the Ministry of Foreign Affairs, the Ministry of Economy and Culture and Guidance should help sports. Achieving an effective seat is not possible only through sports federations, the National Olympic Committee or the Ministry of Sports, and we need all-round help. At the same time, gaining an effective seat in sports goes back to the power and infrastructure of the country. We had a seat on the ship but we lost it, now we are consulting for Hamid Soorian to win a seat. As I said, the seats must be effective in order to improve the status of the championship sport. We do not create resumes for individuals, but the goal should be national interests.

“We have estimated the costs and it is clear to us,” he said of the committee’s budget for next year. The parliament’s cultural commission is meeting for the sports budget. Until the budget is announced, the budget will not be formalized and we will not be able to announce it at the moment. After that, we will officially announce the budget for 1400.

Regarding the results of the Qatari delegation’s visit to Iran and our country’s vote to host Doha for the Asian Games, the head of the National Olympic Committee said: “When we score points, we will also score points.” We held meetings at the National Olympic Committee with the participation of experts and came to the conclusion that the request was immaterial. The use of infrastructure, holding camps, friendly games, joint camps, exchange of coaches are mentioned in the draft memorandum of understanding with Qatar. An oral agreement has been reached and is to be signed.

The head of the National Olympic Committee, in response to the question that people like Peyman Fakhri are made in sports and leave by changing their management, said: “No common sense prefers national interests over personal interests, we should not lose capital but should play a role Have support and run the system, but the expert process is with other friends. In my opinion, it should be settled in the country that the director is not the aggregation of all sciences and sciences. When it comes to the Olympics, it means Sajjadi, when it comes to overseeing the national team, it means pride, plans and hopes for the future, and academic work, it means Qarakhanlu.

In the end, Salehi Amiri emphasized: We are facing two realities, these resources do not and will not meet the needs of the championship in any way. We have six international sporting events ahead next year, and this budget is by no means accountable, but the fact is that the government wills the country in difficult times, which is why we are interacting with the PBO. The government has provided maximum assistance in financing the sports, so that in December we paid 100% of the budget of the sports federations, but the support of the Olympic federations continues and the federations announce their requests to Sajjadi and raise them in the executive board. The agreement will help the relevant federations.