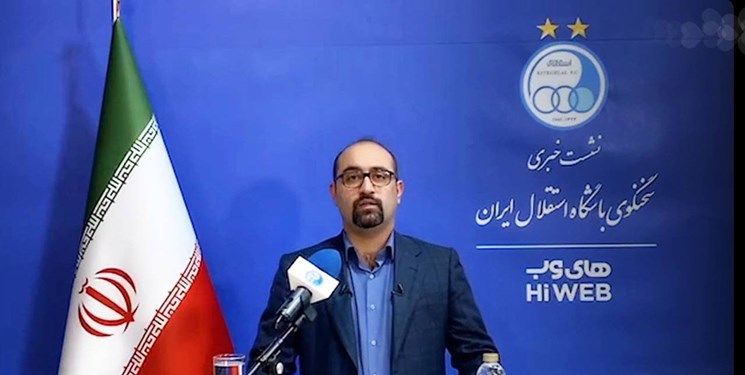 The spokesman of Esteghlal Club said: Madadi, as the CEO of Esteghlal, is following up the executive work related to the transfer of Ghasemi Nejad.
According to Fars News Agency’s sports correspondent, Hojjat Nazari said about the latest situation of Amin Ghasemi Nejad’s recruitment by Esteghlal Club: ‌ I ask all our dear fans to follow the issues calmly and allow us to calmly pursue the goals and interests of the club. Let’s provide. Esteghlal is to attract this Egyptian player, and we have been following this issue many times and we are still pursuing it.
He added: “Negotiations have been held with Ghasemi Nejad and correspondence with Shahr Khodro Club.” The player was asked to join Esteghlal Club, but what is important now is the disagreement within Padideh about the ownership of the club. This was one of the issues raised at the Esteghlal board meeting last night regarding the recruitment of Ghaseminejad.
A member of the board of directors of Esteghlal Club stated: “Finally, if he is going to join Esteghlal Club, which we hope will happen very soon, it is that first we have to see who Azizi will sign his consent.” There is disagreement over whether Padideh Club is still owned by Farhad Hamidavi or the Khorasan General Directorate of Sports and Youth.

Nazari continued: Ahmad Madadi was obliged to inquire about this issue from the Football Federation, and finally we will follow up the discussion of the consent through any authority that the Football Federation declares as the owner of the club, and we hope that the task of obtaining the consent from Padideh Club was determined. We will be able to do the transfer work related to Ghaseminejad very soon.
He added: استقلال Esteghlal Club is completely determined in this matter. Alhamdulillah, the opinion of the entire board of directors is clear and positive, and the necessary authority in this area has been given to Esteghlal CEO. In addition, our loved ones in the board of directors, especially Abdian, have done all the necessary cooperation. The reputation of the board consultant is also pursuing this issue.
The spokesman of Esteghlal Club stated: “All the loved ones agree with the transfer of this player to Esteghlal, but we have entrusted the executive work to the director of the club, and God willing, this will be decided as soon as possible.” We are now facing the challenge of disagreeing over the ownership of Padideh Club, and if this issue is resolved, we will move on to other issues. Discussions about the duration and amount of the contract are not very serious and we try to secure the interests of independence in concluding the contract.

Nazari emphasized: “Certainly our priority is the interests of Esteghlal Club. Sometimes it is possible to do these benefits through lower costs and sometimes by attracting a player who has a higher price.” But what is important is to ensure the interests of the club. We are definitely looking to attract the quality and required players of the team as expected by the technical staff to join our team.

He said about how Persepolis Club has recruited Farshad Faraji from Padideh team with these interpretations: “I do not have exact information in this regard, because the executive work will surely be determined today based on a request from Madadi Football Federation, through which reference They were able to agree with Faraji. This is not a difficult task, but I would like to say again that one of the serious issues raised in the board last night was the same discussion, so the recruitment of Ghaseminejad was delayed a bit, otherwise the supporters of independence would have received news in this area.

A spokesman for Esteghlal Club explained that it was heard that the money deposited by Esteghlal Club had not been transferred to his account due to the blocking of Nikolai Bodorf’s account: “The account he had announced was problematic and despite the fact that we had deposited all the money, this amount Return Yesterday, talks were held with Bodorf himself and FIFA, and correspondence was sent via e-mail.
He added: “This player also announced a new account to us and FIFA also announced that we will open the transfer window of Esteghlal as soon as the money is re-deposited and Swift is announced to us, considering that you have already deposited the money and the problem is from his account.” کرد. We will repay the money today and it seems that the transfer window of Esteghlal will open immediately after this action and we will not have any problem in this regard.
In an interview with Radio Tehran, the spokesman of Esteghlal Club added: “We are in the last days of the year 99, a year that many of us have bad memories of. We lost many of our loved ones, which is unbelievable. The world of football, sports and other strata of This disease has been damaged and I hope that the year 1400 will be good for all the people of the world and Iran and all the people of football and we will see the opening of the stadiums to see once again the indescribable excitement of the platforms.