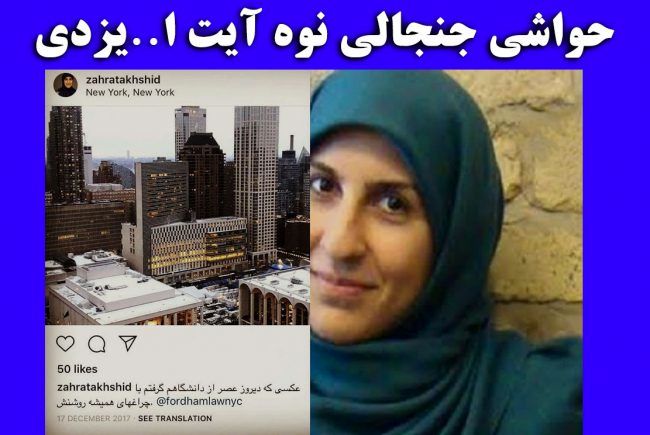 It was in the fall of last year that an image was released in cyberspace that was worth considering. Zahra Takhshid is the granddaughter of Ayatollah Yazdi, who published a photo of her university in New York, writing: “The photo I took of my university yesterday evening with the lights always on.”

June 2014 Ayatollah Mesbah Yazdi said: “The educated people of Britain and then the United States and France have marked the most important cultural deviations of the country; “Because their intellectual structure was made by those countries.” Of course, these objections were not the whole story, because Ayatollah Mesbah is the originator of sending students abroad in 1993. Institute under the supervision of Ayatollah … Mesbah In the first phase of this action, 10 students of the institute left for Canada and the United States. To cover up the contradiction, some pretended that Zahra was influenced by her father’s thoughts. Mohammad Reza Takhshid is an Assistant Professor in the Department of International Relations and Dean of the Faculty of Law and Political Science, University of Tehran.

On January 29, he wrote: “A luxury photo of a girl in the United States has been published and below it is written: Ayatollah’s granddaughter … Mohammad Yazdi! And they do not write: The daughter of Dr. Takhshid, the reformist head of the Faculty of Law of the University of Tehran, the perpetrator of the repression of Hezbollah professors, and the friend of “Hadian” and “Samati” theorists of the Participation Party. ” Some have portrayed this image as a political revenge, because these images and the presence of this person in the United States were not informed earlier, and the weakness of the government and the lack of proper management with insignificant margins such as the Qom seminary and photographs should always be mentioned. Zahra Takhshid and … that no pain from people can be hidden.

Undoubtedly, the reason for highlighting the photo published on Instagram of Zahra Takhshid goes back to the recent letter of Ayatollah … Yazdi to Ayatollah … Shabiri Zanjani. A letter in which Ayatollah Shabiri was denied meeting with the reformists, and Yazdi’s request to Shabbiri Zanjani was widely criticized. Accordingly, some raised the question of why Ayatollah Yazdi did not forbid his grandson and only engaged in commanding and forbidding the elders of the seminary?

Meanwhile, many media activists reacted quickly to the photo. A media activist wrote on his personal Twitter page: “A photo that Ms. Zahra Takhshid, the granddaughter of Ayatollah … Yazdi, took from her university with those always bright lights for those of us who have not seen it in New York.” Another media activist wrote in response to the photo: “Are you upset by the oppressive sanctions? There is nothing wrong, look at the beautiful view of New York City through the camera lens of Ms. “Zahra Takhshid”, the granddaughter of Ayatollah … Mohammad Yazdi, maybe your heart is open!

Finally, after leaking his pictures and stories, Takhshid removed all those who had followed him from the list and deleted his Instagram profile picture.