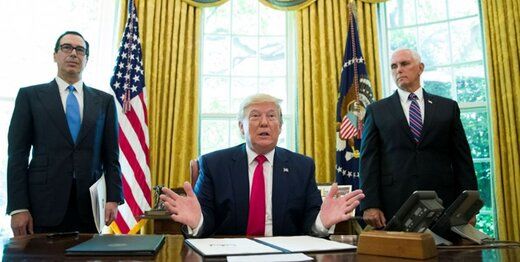 An American media outlet with the name “Inside Arabia” and the slogan “Voice of the Arab People” provides news and analysis on West Asia and North Africa in an analysis by Thomas Falk, written by US President Donald Trump’s “maximum pressure” policy against Two years after its implementation, Iran has failed to deliver its desired results.

According to the American media, after the Islamic Revolution in Iran, the United States has repeatedly imposed sanctions on Iran, but the signing of the Borjam nuclear agreement meant that these sanctions would no longer be imposed. That changed in May 2018, when Trump announced he was pulling out of the deal.

Immediately after this action, on November 3, 2018, Trump launched his maximum pressure campaign, which included political, military and economic pressures, along with the introduction of new sanctions against Iran.

The author of this analysis, without mentioning the US breach of the treaty by withdrawing from the UN Security Council, claimed that although the Trump administration tried to put more pressure on Iran by imposing new sanctions, Iran repeatedly refused to come to the negotiating table and demanded the lifting of sanctions. شد.

The author went on to point out that Iran’s economy has not collapsed despite the maximum pressure campaign and that government-citizen relations have not been strained: “One of the reasons Iran has been able to keep its economy alive is its experience of past sanctions.”

Referring to the humanitarian aid to Iran that the Trump administration was supposed to not impose sanctions on, the analysis wrote: “The campaign has put maximum pressure on the ordinary people of Iran and has reportedly stopped importing pharmaceuticals and medical products into the country.”

Referring to a report by the International Atomic Energy Agency that Iran was not pursuing its nuclear program quickly, the author of the analysis claimed that Iran had shortened its “escape time” to build atomic bombs and weapons.

The author concludes by referring to Iran’s cooperation with the International Atomic Energy Agency (IAEA) observers, based on an analysis by the Brookings Institution.

He wrote that at the current stage of the campaign, Trump’s maximum pressure can not be considered a success and has only been a show of power by him, although his sanctions have affected the daily lives of Iranians.

The author also accused Iran of being aggressive in the West Asian region, claiming that Iran was a threat to other regional actors and that Trump’s campaign of maximum pressure over the past two years had not had a lasting effect on those threats.