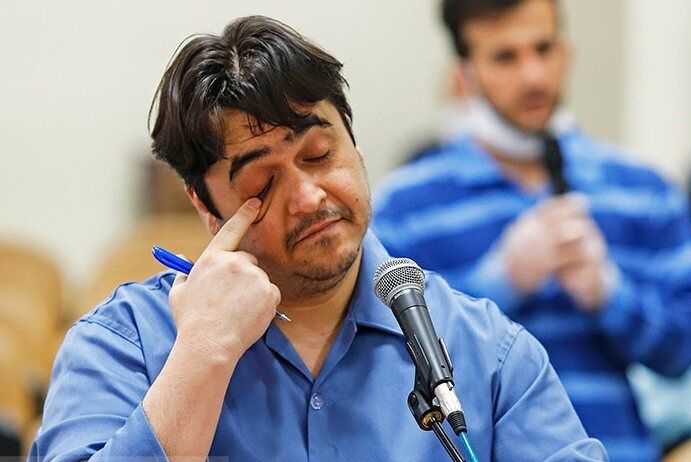 The sentence of Ruhollah Zam, who he said was the leader of the unrest in Iran, was carried out this morning after it was approved by the Supreme Court a month ago.

Ruhollah Zam, who had been under surveillance since 1996, was finally arrested on October 13, 1998, and executed on Saturday morning after 14 months of several interrogations and trials.

According to the indictment issued last winter, Branch 15 of the Revolutionary Court was designated as the reviewing branch. Since Zam already had a case in this branch, according to the law, the charges against this person had to be tried in this branch. Of course, in this case, besides Zam, there were 5 other defendants.

But what were the main accusations of Ruhollah Zam? According to the indictment issued by the Tehran Prosecutor’s Office after months of investigation, the titles of the indictment included 17 indictments as follows;

In the first court session, which was held on February 12, 2009, according to the contents of the case of the accused Ruhollah Zam, son of Mohammad Ali, nicknamed Nima, born 57.5.5 issued by Rey, married, with two children, post-diploma, director of Ma’and Amad News Channel , Arrested and with a criminal record, heard the indictment.

Details of government complaints against Zam

In one of the initial court hearings, the names of the suspects, including the Search Committee of the General Staff of the Armed Forces, the Information Protection Center of the Judiciary, the Legal Vice President, Abbas Jafari Dolatabadi, former Prosecutor of Tehran, Kazem Jalali, Ambassador of the Islamic Republic of Iran to Russia, Gholamreza Katib Majles, Hassan Yousefi Matloub and Ms. Bahareh Sadeghi and a number of other suspects were raised.

From Hajj to Malaysia

In the second session of the court, Zam said about how he left the country: “In 1990, I planned to travel to Hajj with my father and family, but I did not go to Hajj and went to Malaysia.

Addressing the accused, Judge Salavati said: It means that you left the country with the intention of performing Umrah, to which Zam replied: No; There was a gap of two to three days between my trip to Malaysia and my family’s trip to Hajj, and my family did not know about me until one day after I arrived in Malaysia.

The presiding judge asked the defendant: What were you doing in Malaysia? To which Zam replied: I was doing a leadership tour there and I had bought a car and I was doing tourism related to Iranian tourists.

The judge asked Zam: How long have you been in Malaysia? Zam replied: It was in 1991 that I went to Turkey from Malaysia and I was there for three months, then I went to the French embassy in Turkey through a friend I met in 1988 and I talked to the French ambassador there. I asked them for a visa and they gave me a French visa.

The judge asked: When did you enter France? Zam replied: It was around September 1991 that I entered France; I was married in Malaysia so I went to France with my daughter and wife; In 1993, I collaborated with Saham News; It was in 1995 that we decided to start a news site with a group consisting of Majid Niknam, a resident of the United States, Babak Ejlali, a resident of the United States, Shams, a resident of Turkey, and Sam Mahmoudi Sarabi. Of course, there was talk of launching this site in 1992 and 1993, but it wanted money; Finally, in 1995, I came out of Saham and we started Amad News.

The third session of the trial of Ruhollah Zam was held on March 26, 2017. Zam told the court about a special mission. Announcing the Syrian operation and Hajj Qasim’s movements, as well as sending a list of those who circumvent the sanctions to the CIA officer.

At the court hearing, the prosecutor’s representative said: The defendant said in part of his confession that announcing the time and place of the Syrian operations, the movement of commanders, especially Martyr Haj Qassem Soleimani, was one of his missions, to which Zam had responded; I accept my confession, but has all this happened?

The prosecutor’s representative added: “I am referring to a document that the accused Zam, when Sardar Shahid Soleimani arrived in one of the countries in the region, sent a message to the intelligence officer and said that a military team would arrive tomorrow, possibly with Qassem Soleimani.” They are.

Proposal to target sensitive centers of the country

At one of the court hearings, another charge was filed. In this meeting, the issue of attacking the sensitive centers of the country was examined, which was discussed in more detail after the technical director of Amad News confronted him. Mohammadi, one of the other defendants in this case, while introducing himself in the court session, said: I am Tavana Mohammadi. Born on July 23, 1974, he is the technical director of the counter-revolutionary and anti-revolutionary media. Considering the time I have been in prison, I have been in contact with Ruhollah Zam and Amnnews for about 5 years and we have had many collaborations. One of the most important issues of cooperation was the issue of missiles. I made small rockets. Ruhollah Zam offered me to visit a series of sensitive places in the country.

He continued: “By the order of Ruhollah Zam, I was supposed to receive $ 500,000 to hit an IRGC base as a pilot and then $ 2 million for other places.”

Supporting security convicts, the Pahlavi dynasty and the misguided sect

Zam, who also had a lawyer, exercised this legal right in some hearings. In one of the meetings of his lawyer regarding the publication of lies, claiming to support the security convicts, the Pahlavi dynasty stated: “The client honestly accepts the above-mentioned mistakes and there is no defense.” The client is accepted by him for publishing lies and has no defense, and although the client made mistakes in publishing lies, he did not have any intentions.

Issuance of sentence after 9 months

Finally, after several hours of trial, Gholamhossein Esmaili, the spokesman of the Judiciary, announced the issuance of a preliminary verdict in Zam’s case and said: “The court recognized 13 of Zam’s charges as cases of corruption on earth and sentenced him to death.” Of course, this ruling is not final.

On the morning of Saturday, December 13, 1999, 14 months after the arrest of Ruhollah Zam, he said that he had the heaviest security team after the French Macron, and was hanged in cases involving espionage, spreading lies, leading riots, and so on.