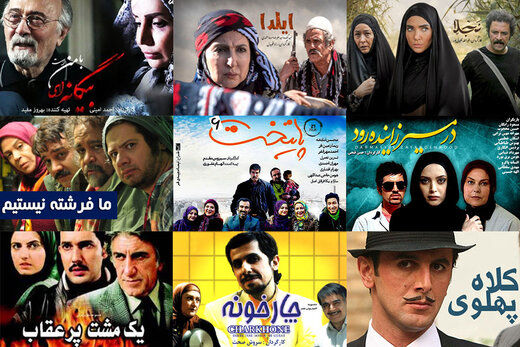 In recent years, there have been sensitivities about the use of accents in TV series, and the question has been raised by the writers of the series that they can do something or joke about it? And none of them could come up with a convincing answer. As a result, some of these writers have resorted to creativity and invented new dialects such as ” Barare’s nights Which to some extent was able to keep the audience satisfied.

Not to mention that every year many series and movies are made that use different accents without any problems. Although some of the series use accents, some directors, such as Saeed Agakhani In “Noon.kh”, they managed this story well and did not face any criticism.

In the following, we will take a look at the serials that were marginalized in this regard.

A series that was marginalized due to the lack of accent

« ایل‌دا According to Rama Ghavidel, the director of the series, it was intended to show the bravery of the people of Lorestan during the war years, but as soon as the people in Lorestan had no accent, it seemed a little strange. The decision of the producers was not to use accent in the series so as not to be marginalized and their hands were open to choose an actor, which was again protested.

These margins show that as much as mispronouncing harms the work, not using the accent has its own margins and objections.

A challenge that the director did not meet

The use of some dialects and dialects in serialization is a bit common, for example, common dialects in the south of the country fall into this category. But in some series, the actors’ utterance of these accents has not been able to do the right thing. « Najla Is one of these series.

Troubled dubbing for a negative character

If you are a big fan of TV tablets and serials, these days the serial « He is an alien to me You can see the work of Ahmad Amini and Arash Meyarian on Do Sima TV. The life of several families who speak either with different accents. So far, everything is normal, but when it comes to playing the role of Ahmadinejad (Salim), we come across a voice that does not hit the actor at all. Salim is a negative character who lives in Khuzestan based on the story of the script, which is why the real voice of Ahmadinejad’s message was not heard.

Although the actor was very upset about this and said that he had worked hard to express the Khuzestani dialect, but because the actor played the role of Salim in this Serial It has a southern accent and has appeared in a negative role. In order not to create a margin for the series, it was included in the series without accents, which, of course, caused the reaction of the actor, producer and some TV viewers.

There was also the problem of “we are not angels.”

Flora Sam is one of those directors who tries to use different dialects, especially Shirazi, in her series. We have seen his example in the serials “Colonel’s Garden” and “Family Conspiracy”.

In 1992, Sam decided to make the series “We Are Not Angels” and broadcast it on TV, which encountered major problems due to the use of accent, and just on the eve of the broadcast, Tehran network officials preferred to dub the series to escape possible sensitivities.

Why was Alireza Khamseh’s accent removed?

If we go back, we realize that the series “Alien is with me” or “We are not angels” are not the only series that have been dubbed again due to the accent and the actors’ voices have been changed. This is the first time this has happened on TV and maybe It can be said that the first series that experienced this event was “A Fist Full of Eagles”.

It was February 2007 that Alireza Khamseh In this series, he played the role of an Azeri sergeant. Before the series “A Fist Full of Eagles”, several series were produced on television that had characters with accents and were broadcast without any problems, but the Khamseh dialect, which also had a short role in the series “A Fist Full of Eagles”, became a problem and finally The work series was re-dubbed.

“Capital” and a steep path

Serial « Capital So far, 6 seasons of it have been on the air One TV network Gone and recently got involved in a series of fringes, is somehow relatively popular among the people of television, of course, 9 years ago and after the airing of “Capital 1” on Nowruz 90 protests against the misuse of Mazandaran dialect in this series It became a hot topic in the media. Gradually, the scope of the protests increased and until the reaction of the members of parliament and the Friday Imams, several cities in this northern province went ahead, but the officials of Sima did something to Sirus Moghaddam And they did not have his popular series.

The protests went so far that the protesters sat in front of the governor’s office before making the second season of the series and demanded the closure of the project. Finally, Moghaddam and his group were not allowed to film because the protest against the Mazandaran dialect of “Paytakht” actors goes far beyond It was the opinion of the people. At that time, the representatives of the people of East Mazandaran, Mazandaran province, the Friday Imams of Babolsar and Ghaemshahr, etc. all protested against this series.

But finally the second season was made, but the strange thing is that after the third season of “Capital” went on the air, this issue was repeated again. The protests were dragged to the parliament and a group of representatives of Mazandaran in a letter to the head of the Article 90 Parliamentary Commission in protest of the broadcast of the series “Capital 3” during Nowruz called for this issue to be addressed, but eventually “Capital” reached chapter four and these protests Was forgotten.

Hassan Fathi and the failure of “on the way to Zayandehrud”

It was 1989 when the filmmaking camera حسن فتحی To make “On the Zayandeh River”, he walked in the back alleys of Isfahan to portray the life of a football player. Fathi may have known at the time of making this series that he might marginalize the series because of the references he makes behind the scenes of football and his adventures, but this series was damaged from a point that Fathi did not pay much attention to. Isfahani dialect. The non-Isfahan audience may not have noticed the wrong accent, but the people of Isfahan were faced with a strange accent, and this raised the cry of protest of the officials to the point that Mohammad Taghi Rahbar, the representative of Isfahan at the time, believed that the series had insulted the people of Isfahan. This series became faster.

Going back a bit, we find that the objection to dialects in serialization is not only internal, but at some point in time and for the series “Charkhooneh”, this issue became external as well.

The series “Charkhooneh” had a humorous theme and a character with an Afghan accent. After the series aired, Afghanistan’s cultural advisor in Iran protested the use of an Afghan accent for the character. The Minister of Culture of Afghanistan also complained about this issue in a conversation with the Iranian Cultural Adviser in Afghanistan.